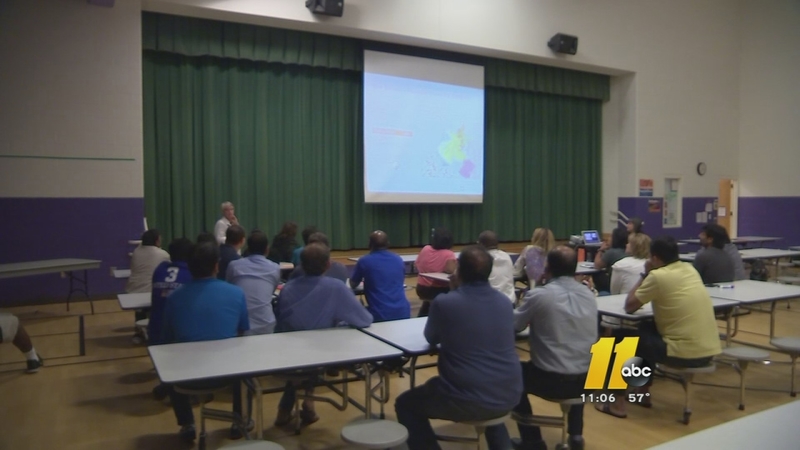 RALEIGH (WTVD) -- Some Wake County parents gathered once again Thursday evening to plead with district leaders not to change their children's school.

When the district unveiled its second draft of the school enrollment plan, it scheduled three public hearings. Thursday night's at River Bend Elementary was the third public hearing and a third opportunity for parents to share their concerns.

At this particular meeting, some parents attended to speak out against the base middle school changing for the Breckenridge Community in Morrisville. Parents are upset that due to overcrowding students would have to go to West Cary Middle School, which is more than a 20 minute drive for them, longer by bus.

Cathy Moore, the Deputy Superintendent of Academic Achievement told parents that they are being heard but it's one of those situations where there are no good answers. District leaders have been saying for years that the area is growing and expect to have 40,000 more students in the next 10 years. They're tasked with having to fill new schools as they're built.

Parents at Thursday's meeting were very receptive and understanding of that, but one mother was even moved to tears because of her love for Mills Park Middle School.

"Mills Park is such an amazing school, the staff there, the leadership. Bob Smith, the principal at Mills Park is so amazing. It's over capacity, but it works," she said.

Thursday night's meeting is only the third public meeting to hear from parents on the second draft of the school enrollment plan. There will be another public hearing on November 3 during the Wake County School Board meeting that night.

Once the district hears from the public in person that last time they will review and discuss a third draft of the plan to vote in by December 1.