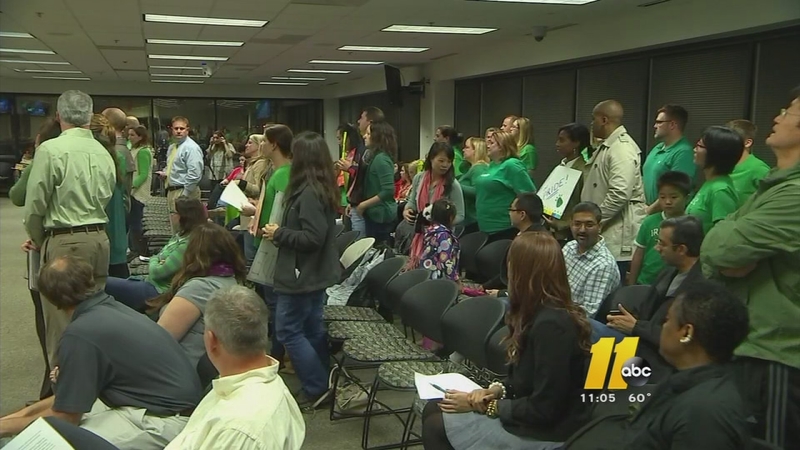 RALEIGH (WTVD) -- After three drafts, some 2000 online comments, and a series of public meetings, Tuesday night was the night parents finally got to have their say in front of the Wake County School Board about a controversial school reassignment plan.

Showing strength in numbers, parents from Leesville Road Elementary delivered a petition with over 500 signatures that asks the board for a 2-year moratorium on reassigning any students from their north Raleigh school.

One by one at the podium, Leesville parents clad in all green cited concerns about safety, traffic, and growth projections to make their case in 2-minute time allotments.

"Two minutes is a really tough time to speak in. They made it clear, they wanted data points," said parent Sherry Gentry-Gasper.

And while some Leesville parents brought facts and figures, others brought plenty of emotion.

"We just wanna stay where we are!" said one.

"We've looked at it 18 different ways, and it just doesn't make sense to us," said another.

Leesville parents have been fending off a proposal to reassign their kids to newly built Pleasant Grove Elementary in Cary.

"If they don't want Pleasant Grove, we want it! Give it to us as our base, give it us," said a parent from Brier Creek. Parents from that school dressed in red and said they are sick of their children being bounced around as reassignment plans change and evolve.

"We've been switched around year after year after year- and they're not looking at the long-term solution. They're putting on band aids and not thinking about the kids," said parent Shilpa Shelton.
After listening to the parents, board members said they'll consider the input.

"We have already made changes in that area and we are continuing to take in info and we're gonna try to make the best decisions we can with the seats we have and where growth has been in the school system," said Wake board president Christine Kushner.

The board is expected to take a final vote on the issue December 1.

The full proposal can be read here: http://wcpss.net/Domain/6073