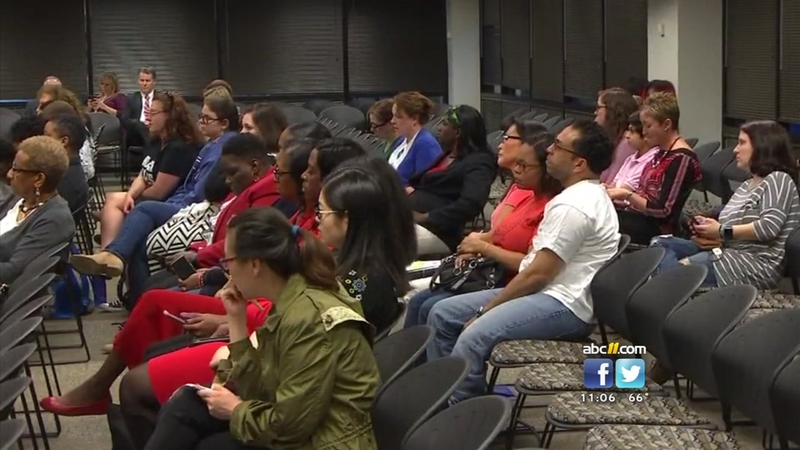 Not long after North Carolina House Speaker Tim Moore announced the creation of a School Safety Committee that would among things consider whether to arm school teachers, board members in the state's largest school district met for the first time since the massacre at a high school in Parkland, Florida.

No one on the Wake County School Board seemed ready to consider allowing teachers to carry weapons. But preventing a massacre like Parkland was top of mind at their Tuesday night meeting.

"As elected officials we are being asked, what are we doing to protect the students of Wake County Public Schools," said Kathy Hartenstine, District 7 school board member.

It's not the first time WCPSS has faced these questions.

After the rampage at Sandy Hook Elementary, WCPSS installed a Safe Schools Task Force. And of the panel's 15 recommendations, 12 have been implemented: more cameras, door buzzers, limited access to elementary schools and more locked doors.

Tonight’s @WCPSS School Board Mtg began with a moment of silence for the victims of the #ParklandSchoolShooting pic.twitter.com/LSpyL18jp3

But, the Wake County sheriff's recommendation of a dedicated police force employed by the school district never materialized. However, board members have not forgotten.

"(Our own police force) is an expensive proposition," said District 4 board member Keith Sutton. "But not one that's out of the question or that we could not do. But I think the question there is, is that where we want to spend resources?"

After a moment of silence for the students killed in Florida, board members spent the first portion of the meeting batting around their first thoughts on how to ensure it doesn't happen here.

Their ideas did not focus on more police, but more trained staff and counselors to spot the warning signs of students in trauma or distress who may lash out in violence.

"Having more state-funded social workers, counselors and school psychologists - I think that's a great place for us to start," said Christine Kushner, District 3 board member.

Vice-Chair Jim Martin took his comments further than any of his colleagues, calling on state and federal lawmakers to get tougher on guns.

"The idea that it's all social work and psychology is gonna solve the problem - no, no, no," Martin said. "That's not gonna be the only solution. We're probably not supposed to say it, but we need gun control."

Meantime in Cleveland County, Moore was rolling out his plan to address school safety. The Republican leader said the newly-formed School Safety Committee will consider all viable ideas, including arming North Carolina teachers.

"Schools should be a place where children are free to learn and be free of fear," Moore said. "And we want to make sure that we're doing all we can to make sure that North Carolina schools are the safest in the country."