A professional photographer filmed the incident and shared the footage: "I'm not scared of bananas and Chips Ahoy!"
KGO
By Dion Lim 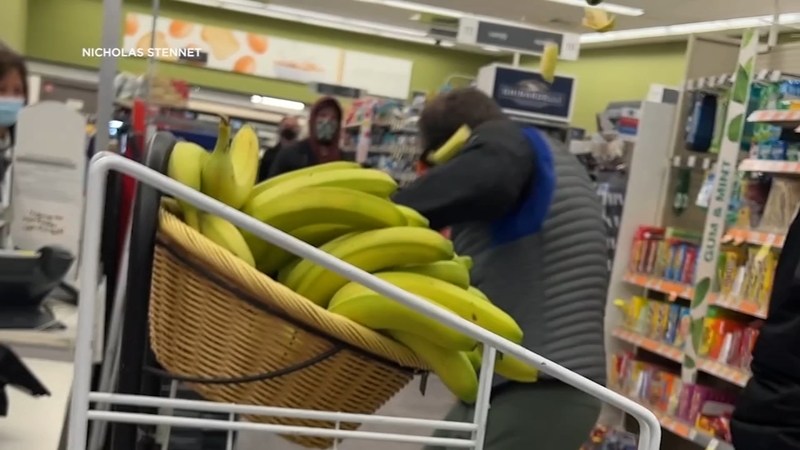 SAN FRANCISCO -- A bizarre and brazen theft that turned into a food fight at a San Francisco Walgreens was captured on video.

In the cell phone video shared with our sister station, KGO-TV, recorded by professional photographer Nicholas Stennet, you can see two Walgreens employees behind the counter, trying to signal for help as a man dressed in black fills up a large bag with items.

"We have this person that is... taking everything from the counter," said one employee into the phone.

Stennet has witnessed these crimes before, but never anticipated jumping in to record, especially after he says the suspect knocked a man's phone out of his hand who was trying to record moments earlier.

"He goes behind the counter taking stuff, maybe some COVID tests, a tray of batteries, some electronics."

Several employees at the store looked on, waiting for help to arrive. Meanwhile, the suspect, with stunning calmness, cherry-picks items to place into his bag.

"I feel bad for the workers," said Stennet.

At one point another customer tried to intervene, challenging the suspect with, "What, you want to go?"

The suspect then grabbed bunches of bananas and hurled them at the customer.

When the customer tried to fight back, reaching for more bananas, you can hear a store employee say "no, no, no, no!" in an effort to try to deescalate the situation. The customer ignored the request and threw bananas back.

Cell phone video taken Monday shows some of the brazen crime that has been driving retailers out of San Francisco.

"[The suspect] then comes back with some Chips Ahoy to throw back at him!" exclaimed Stennet.

Jim Rita, a former law enforcement officer from California and president of SRS Protection, which provides security to businesses and places of worship in five states, said providing security in California is challenging.

"There are several states we work in where security officer are allowed to do their jobs. In the good old days, we could put them in cuffs take them in the back and call the cops. The store would prosecute," he explained.

Rita doesn't recommend bystanders confront a suspect in the act.

"We don't want the citizen get hurt either, I know how frustrating it is," he said.

Though he believes, if video can be taken safely, like how Stennet did, it can help law enforcement.

"If there's no gun involved, I'm not scared of bananas and Chips Ahoy!" beamed Stennet. "If I can raise a little awareness and help with the prosecution, that would be nice."