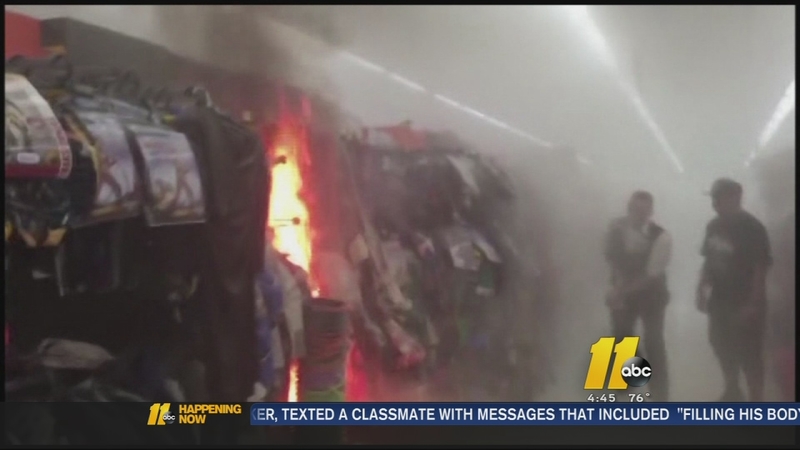 SAN LEANDRO, Calif. (WTVD) -- Smoke and flames cleared out a Walmart store in San Leandro, California, Tuesday. It was all started by an alleged arsonist who walked into the store, sprayed lighter fluid all over and lit the place on fire.

Investigators are interviewing the suspect and they are trying to figure out why he did it. Loss prevention operators said they saw the man pushing a cart around the store early in the morning with a leaking bottle of lighter fluid. A few hours later, he allegedly lit the place on fire.

Paul Miller says he shot a video shortly after a man walked into the Walmart and set the Halloween costume aisle on fire.

"My biggest concern at the time was to make sure that all the families were out," Miller said. "It looks like some kids were there as their parents were helping them shop for Halloween items."

Mario Lopez, a witness, says it was about 1:30 in the afternoon. He was waiting at the pharmacy for his prescription.

"Just before she handed me the prescription she said, 'Sorry, fire. Get our of here.' So everybody scrammed. And we went out of the garden area, and people were flocking out like you wouldn't believe."

He only lit one aisle on fire before a Walmart employee said he and a security guard tackled the man and held him until police arrived.

"It's was scary. Everyone was freaking out. It's like, oh my goodness, what is going on here?" said witness Naomi Santiago.

"You can't even shop without worrying about somebody doing something insane," Lopez said.

In spite of the chaos, witnesses say Walmart employees calmly led customers out of the store.