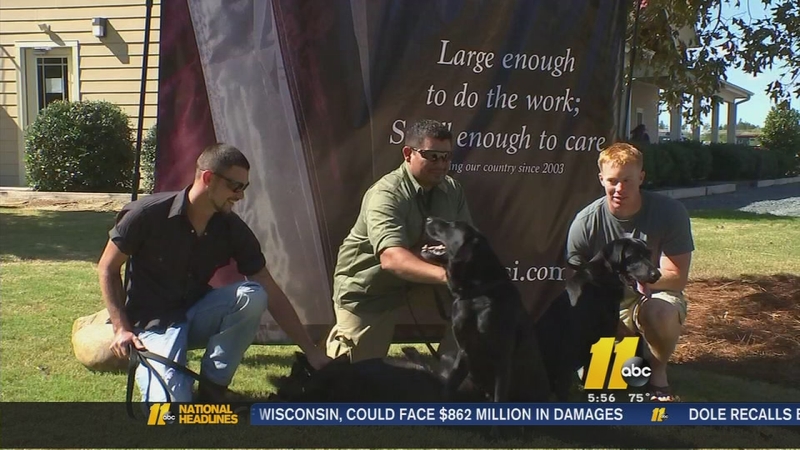 In 2006, fresh off a deployment to Afghanistan where they'd sniffed out IEDs and literally saved lives, the two parted ways.

"I didn't know where he was, or they couldn't tell me where he was because he was still with military security," said Jaramillo.

On Wednesday, all of that changed.

"It's like winning the lottery," Jaramillo laughed. " Life's complete. I got my buddy back."

Jaramillo was one of three Marine handlers reunited with their war dogs at K2 Solutions, Incorporated's Richmond County training facilities. The Marines had trained with the dogs years ago as a part of the Corps' now-defunct IDD program. Because of military downsizing and drawdowns from war, the government cut the program and gave the okay for K2 to offer the adoptions. Last week, K2 started contacting dozens of current or former Marines, among the 950 handlers in the program's history.

"I actually got to make the phone calls to the guys coming to get their dogs," smiled Brooklyn Smith, a marketing specialist with K2.

From the training ground outside of Southern Pines to the battlegrounds of Afghanistan, the Marines and war dogs united on their missions, providing critical professional and emotional support for one another.

But when they returned, many of the war dogs headed off to the next assignment, often placed with law enforcement agencies across the country. Some of the handlers got out of the military, and some stayed in. They'd always thought of their Battle Buddies.

"I tried to keep up with him," said Sergeant Mark Slocum, who was reunited with his black labrador, Tug. "I never thought I'd be able to adopt him because he had several handlers over the years."

Like Jaramillo and Shooter, Sergeant Slocum and Tug shared many months in Afghanistan in 2011. Tug was like Slocum's child, whom he protected under enemy fire just like any other platoon member. And Tug was a true professional.

"He had a great nose," said Slocum. "He could smell things from far away and gunfire never bothered him."

Former Marine Corporal Stephen Kessler's Battle Buddy was Cade. Cade had already been adopted by another handler, so on Wednesday Kessler was allowed to take Susie home. For the 25-year-old, the adoption is a step along the road to healing.

""It's going to be a help to me honestly because there's a lot of struggles after you get out," said Kessler. "And these dogs, they're not certified, but in my eyes they're every bit certified to help people."

K2 will complete the remaining nine adoptions in ceremonies on Friday and Saturday. For the handler who cannot travel to North Carolina, the Houston-based Mission K9 Rescue non-profit will pay for travel expenses to fly the war dog to its Forever Homes.