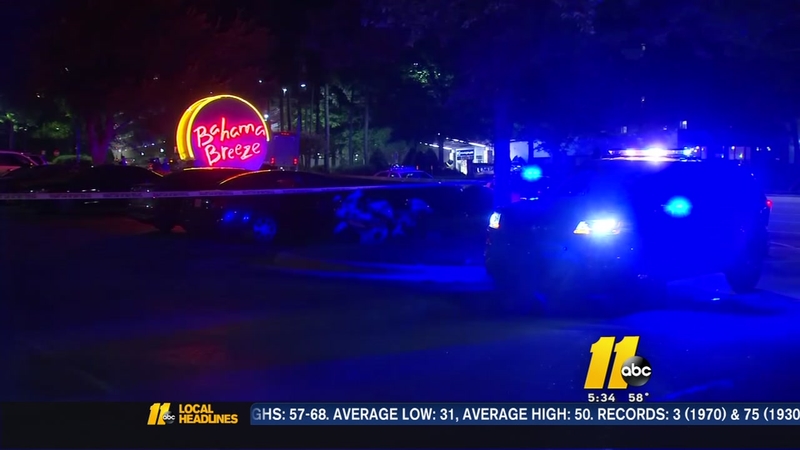 RALEIGH, NC (WTVD) -- It's now clear that dozens of shots were fired on a warm June night in the parking lot of Bahama Breeze - a popular north Raleigh restaurant often frequented by families.

New details in the crime were revealed in just-released search warrants filed in the case - 27 in all.

Now the police search warrants reveal why they charged Ashanti Bennett, 33, with murder and Jamar Allen with felony conspiracy.

Investigators say an associate of Lennon's told them, "...Lennon was set up by Bennett due to Lennon losing a large quantity of Bennett's and "Mar's" drugs..."

"Mar" - police said they believe - is the nickname for the 22-year Allen, who is from of Charlotte.

RPD search warrants: Former ECU football player was murdered at Bahama Breeze because drugs he was in charge of transporting were seized by authorities. #ABC11 pic.twitter.com/D9nA5mIeTX

In the search warrants, investigators say they soon confirmed, "...a Raleigh woman was arrested in Chicago in the middle of May with a large quantity of drugs. The associate told us that this woman was hired by Lennon to transport the drugs from Seattle to North Carolina. The associate explained that Lennon was murdered due to the drugs being seized by law enforcement."

The woman mentioned in the search warrants was apparently trying to bring 30 pounds of marijuana on a North Carolina-bound Amtrak train - according to Chicago news reports from May of last year.

Police have also arrested two other men in connection with the murder.

Wantavius Jackson of Kinston and Clifton Spellman of Greenville, both 25, are charged with felony conspiracy to commit murder.

According to one search warrant, "The video surveillance of the Bahama Breeze parking lot shows Lennon and Bennett parking next to each other and walking into Bahama Breeze together. In the video, Bennett is carrying a light colored book bag... inside the bag was found a large amount of gang paraphernalia..."

The shooting apparently started not long after the two walked out of the restaurant.

Investigators say Lennon was shot 19 times and they recovered shell casings that are likely from a .45 caliber pistol and a .223 caliber rifle.

But police apparently believe the planning began earlier that day, miles away.

The search warrants go on to say that one of the associates was using a prepaid cell phone - what gang members refer to as a "burner" phone.