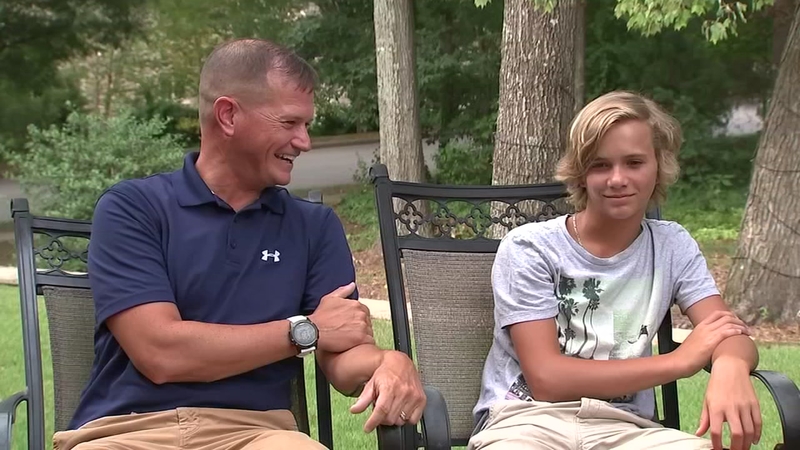 RALEIGH, N.C. (WTVD) -- Already this year, seven people have drowned on the North Carolina coast. To put that in perspective there have been 28 coastal drownings nationwide.

ABC11 has learned that number could have notched one higher last week but for the quick action of a Raleigh man and his teenage son.

Kevin and Mason Hickey were vacationing at Ocean Isle -- an annual trek that brought two dozen other members of their extended family.

On July 9, the Hickeys saw a 12-year-old girl standing in the shallows yelling.

"She was screaming at the top of her lungs and pointing out to the ocean. And you could see someone in the far distance," Kevin Hickey told ABC11.

That someone was the girl's grandfather Wayne Kelley.

Minutes earlier, the 74-year-old had been riding waves with his granddaughter.

"We went under like two waves at once and I came up and there was no bottom," Kelley told ABC11 on Thursday by FaceTime from his home near Roanoke, Virginia. "And so I said, 'Marlie we need to start to get back to land.' And all of a sudden, I tried and I still couldn't touch the bottom. So I just gave Marlie a push and said, 'Go back, Marlie. Just go back,'"

He said she turned back to look at him.

Kelley's shove gave her the momentum she needed to make it back to shore as a rip current was pulling him farther away.

Kelley said he kept struggling against the rip current and his panic caused him to ignore what he calls to the golden rule of rip currents -- to swim parallel to shore.

"The more (I) fought it, the more I would go under water and take a drink of the water," he said.

And just when he thought he was going to go under for the last time, a man emerged from a whitecap just feet away.

"He" was Kevin Hickey, who had jumped in as soon as he heard Marlie's cries for help

"I didn't hesitate. I just went in. I'm a decent swimmer," Hickey said.

But Hickey is being modest.

He competes in Ironman triathlons which include long-distance running and biking, and a 2.4 mile-swim.

"Of all places for me to go to get into trouble it was directly in front of Kevin and his family. And he is a triathlon swimmer," Kelley said, and he noted how lucky he had been.

TEEN SON RISKS HIS OWN LIFE

When Hickey's son Mason saw his dad jump in, he grabbed a boogie board and jumped in, too.

Hickey said just as he grabbed Kelley, he turned and saw Mason right behind him pushing the boogie board toward the elderly man.

Hickey recalled that moment with pride saying, "To have my 15-year-old son be there right after me and to help me and assist me, it was, it was everything a dad could want to see your son really become a man in a matter of seconds. The pride that I felt, that his mom felt, that all of our family felt for him was just immense."

Mason said that when he reached Kelley he realized how close he was to drowning.

"You could tell he was really tired and he was about to go under because he couldn't even support his own weight. So we plopped him on the boogie board and grabbed two ends and then we went with the current," Mason said. "And then we got to where we could touch and he had no strength whatsoever. So we had to carry him in."

Kelley praised the two saying, "I'm not sure I could have even lasted another minute. I was, I was exhausted. And I think they were definitely the difference in me living and drowning."

Once all three were on the shore, relief set in, followed by celebration.

Marlie was crying and hugging her pawpaw and strangers were congratulating Kevin and Mason Hickey for saving Kelley.

Like most heroes, the Hickeys are quick to tell you they aren't.

A father’s pride and a successful rip current rescue lead to story of a new friendship. https://t.co/qmICYtTRCs #ABC11 pic.twitter.com/R8qArlHFtK

But they point out that Kelley and his granddaughter are also lifesavers.

Kelley saved the girl by shoving her out of the rip current.

And she helped rescue her grandfather by calling for help.

LENDING A HAND, GAINING A FRIEND

After several more days on the beach together the two families became fast friends.

When it was time for the Hickeys to head home to Raleigh, Kelley's wife came over to hug Mason one more time.

Kevin Hickey has no doubt the Kelleys will do just that.

They are already making plans to get together including vacationing at Ocean Isle again next year.