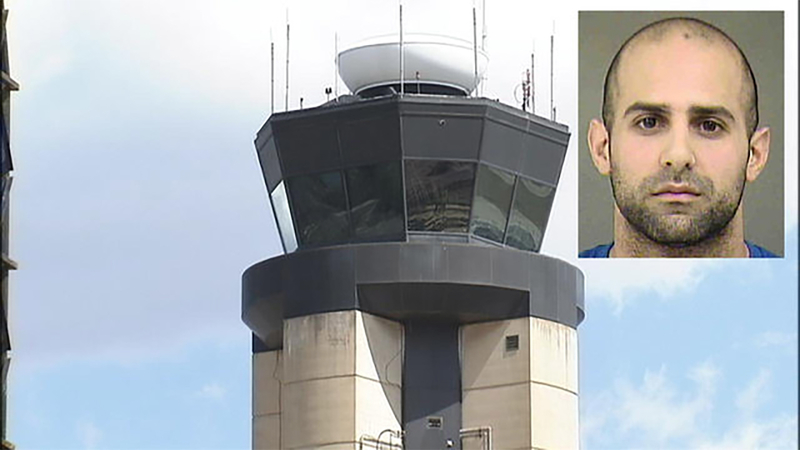 Paul Dandan was working in the Charlotte Douglas airport at the time of his arrest, sources say.

Dandan had some kind of explosive, which was not at the airport, sources told the Charlotte TV station.

Dandan's roommate was arrested for having bomb-making materials, which were not at the airport.

The Federal Aviation Administration has terminated Dandan's access to the airport.

A man identified as Derrick Fells allegedly made a homemade pipe bomb to use against a neighbor who he was having a dispute with, police said.

Fells decided not use the Pipe Bomb and instead gave the pipe bomb to Dandon, an acquaintance. who works for the FAA.

"The FAA employee only had access to the offsite Air Traffic Control Tower and had no access to the restricted areas of the terminal or ramp. He did not have access to any aircraft at the Airport," Charlotte Douglas Airport said in a release.

Federal agents are involved in the investigation.

ABC11 has decided to slowly reduce the number of stories on the website that have a comments section. We believe very strongly that our audience should have an opportunity to discuss and debate events in our world, however, we have not been able to moderate the comments as well as we would like. Instead of hosting a platform that could allow a few loud and ugly voices to dominate a conversation, we want to encourage everyone to join us on our social media platforms and speak out there. Facebook: facebook.com/ABC11 Twitter: twitter.com/ABC11_WTVD
Report a correction or typo
Related topics:
charlottencairport newsweaponsexplosives foundnorth carolina newscharlotte news
Copyright © 2022 WTVD-TV. All Rights Reserved.
TOP STORIES
Cary store owner says thieves stole 300 gallons of gas
Mother, son found dead outside Hope Mills apartments
Wake Forest Montford Point Marine celebrates 100th birthday
Wake County reports highest rate of COVID-19 cases per capita in NC
With primaries finished, candidates turn focus to November
Motorcyclist killed in two-vehicle crash in Fayetteville
Biden invokes Defense Production Act for formula shortage
Show More
NC woman wins $2M on lottery scratch-off on Friday the 13th
Gas prices continue to hit new highs in NC
Target's stock plunges amid disappointing first quarter results
Wake Co. Board of Education approves meal price increase for 2022-23
1st monkeypox case in US this year reported in Massachusetts
More TOP STORIES News