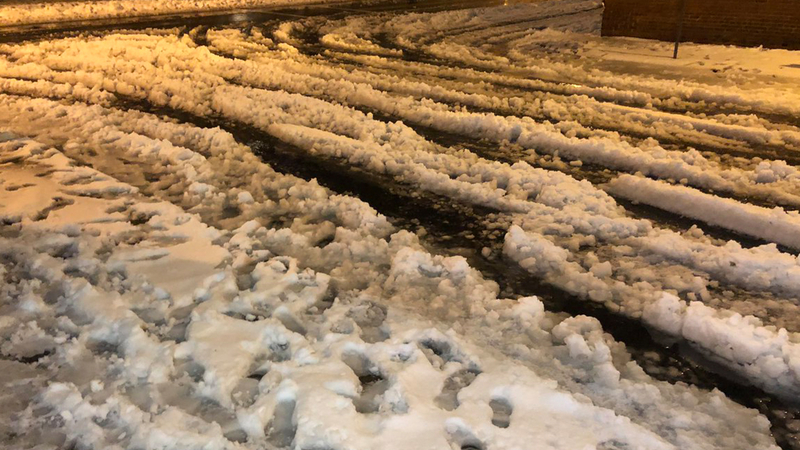 EMBED <>More Videos
RALEIGH (WTVD) -- The snow storm that arrived in the Triangle on Sunday is finally pulling away from the region.

As of this evening some areas in the Triangle have seen as much as 14 inches of snow. As we move through the overnight temperatures will remain in the lower 30s.

Another round of precipitation will develop across the region later tonight with surface temperatures near freezing and some slight warming remaining aloft, which means the threat of a wintry mix remains, especially from the Triangle to the north and west.

Overnight
Temperatures will remain between 32-34 degrees. ABC11 Chief Meteorologist Chris Hohmann said most of the ABC11 viewing area will avoid a hard freeze overnight.
Some areas north and west of Raleigh-Durham could dip below 32 degrees, but the majority of the area will stay above freezing.

As of 1 p.m. Sunday, RDU had received 7 inches of snow on Sunday.

RDU is now tied for the third highest daily snowfall amount in December.

The snow is causing significant problems on the roads. Check the traffic map here.

"Enjoy the beauty, but respect the danger," Governor Roy Cooper said during a news conference Sunday morning. He said there have been more than 500 wrecks in the state since midnight.

GoTriangle, GoCary, GoDurham, and Chapel Hill Transit have suspended all service for the rest of the day.

Currently, Duke Street is closed in both directions between Leon Avenue and Murray Avenue. There are also power outages at the intersections of Chapel Hill Road/Anderson Street and Chapel Hill Road/Lakewood Avenue. Power is also out on Garrett Road.

TREE DOWN! This is on Six Forks near Barrett. Police say there was a power line down but that has been removed. Now the tree is the only issue. The road is CLOSED here. @kimdeanerabc11 #ABC11 pic.twitter.com/v94QsZOITZ

How bad is it out here in these streets? That’s a snowplow getting pulled out of the accumulated powder on Highway 49! We spotted it on our way into the western side of Person County. As expected, lots of snow on the roads here now. @ABC11_WTVD #abc11 pic.twitter.com/n5KoKT2iuj

Lots of trouble spots in Lee County near Sanford. This car looks like it hit a slick spot and ran off the road. #abc11 pic.twitter.com/Esck7yludR

The winter storm has caused hundreds of businesses to close. Check the full list here.

More than 100 flights into and out of Raleigh-Durham International Airport were canceled Sunday morning.

147,325 people are without power across North Carolina, according to NCDOT officials.

VIEW THE OUTAGE MAP BELOW.