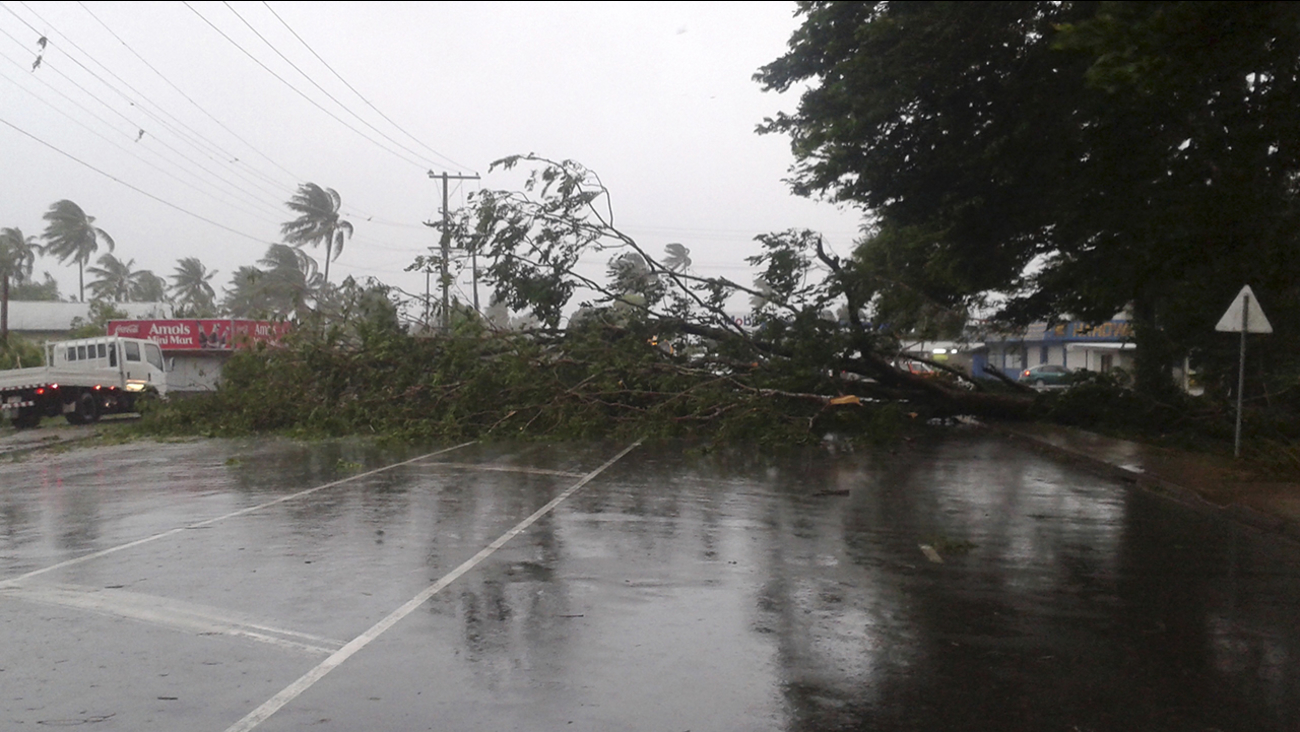 A tree blocks a road after it was blown down by the encroaching cyclone Winston in Nakasi, Fiji, Saturday, Feb. 20, 2016. (Jonacani Lalakobau/Fiji Times via AP)

WELLINGTON, New Zealand -- Residents of Fiji hunkered down Saturday as a ferocious cyclone tore through the Pacific island chain, prompting authorities to impose a nationwide curfew and declare a monthlong state of disaster.

Wind speeds from Cyclone Winston were estimated at up to 285 kilometers (177 miles) per hour. The cyclone was tracking late Saturday along the northern coast of the main island, Viti Levu.

Fiji's capital, Suva, located in the southern part of the main island, was experiencing high winds but was not directly in the cyclone's path. The popular tourist resorts in Viti Levu's west, however, were closer to the cyclone's center.

Flights were canceled and authorities urged people to find somewhere safe to hunker down for the night and to not venture outside. A nationwide curfew was imposed at 6 p.m.

Prime Minister Voreqe Bainimarama wrote on Facebook on Saturday that the island's evacuation centers were operational and that the government was prepared to deal with a potential crisis.

"As a nation, we are facing an ordeal of the most grievous kind," he wrote. "We must stick together as a people and look after each other."

He said he was concerned some people in the cities weren't taking the threat seriously enough.

The government declared a state of natural disaster for 30 days, giving extra powers to police to arrest people without a warrant in the interest of public safety.

The U.S. Joint Typhoon Warning Center said gusts from the cyclone were reaching 350 kph (155 mph) and sustained winds up to 285 kph. Those speeds had eased slightly from earlier in the day.

The Fiji Times newspaper reported that some homes had had their roofs blown away and that five people had managed to swim to safety after their boat capsized.

The Times said there had been a run on supermarkets and stores as people stocked up on essential supplies before the cyclone hit.