Ellicott City flooding: Baltimore area hit by flash floods for second time in as many years 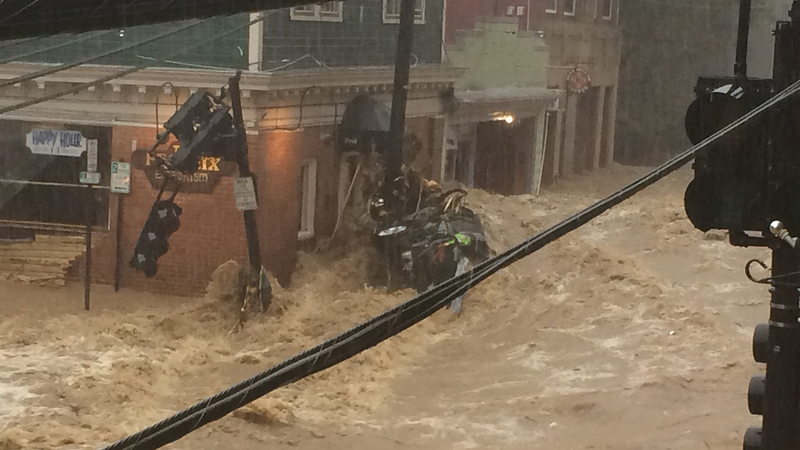 ELLICOTT CITY, Md. -- A central Maryland town was hit by flash flooding Sunday afternoon, less than two years after a devastating flash flood blamed for two deaths and millions of dollars in damage.

Photos and videos taken by eyewitnesses show floodwaters several feet deep surging down Main Street in the city's historic district. Cars were seen bobbing in the water as people looked on from the upper floors of buildings.

The National Weather Service issued a flash flood emergency late in the afternoon for Ellicott City, a town 10 miles west of Baltimore, warning of an "extremely dangerous and potentially catastrophic situation."

5:30 PM Sunday- **FLASH FLOOD EMERGENCY** remains in effect for Ellicott City. This is an EXTREMELY DANGEROUS AND POTENTIALLY CATASTROPHIC situation and you must move to HIGHER GROUND IMMEDIATELY AND STAY AWAY FROM ANYWHERE WHERE WATER IS MOVING.

Residents were urged to avoid the area, and those trapped were told to seek higher ground and await rescue.

Maryland Governor Larry Hogan said on Twitter that he had declared a state of emergency, and the Howard County Fire Department said it had summoned first responders from as far away as Northern Virginia to assist in rescue efforts. The agency added that water had risen above the first floor of buildings in some areas and that it had received reports of building collapses.

A local newspaper reporter remarked on Twitter that Sunday's flooding looked "worse than 2016," when a similar flash flood struck the same neighborhood on Saturday, July 30. During that flooding event, a group of bystanders formed a human chain to rescue a motorist trapped in her car in a widely circulated video clip.

Several men created a human chain and rescued a woman during floods in Ellicott City, Maryland.

In addition to the flooding in Ellicott City, flooding was also reported elsewhere in Howard County and in neighboring Baltimore City and county.