Many on NC coast plan to ride out Hurricane Matthew 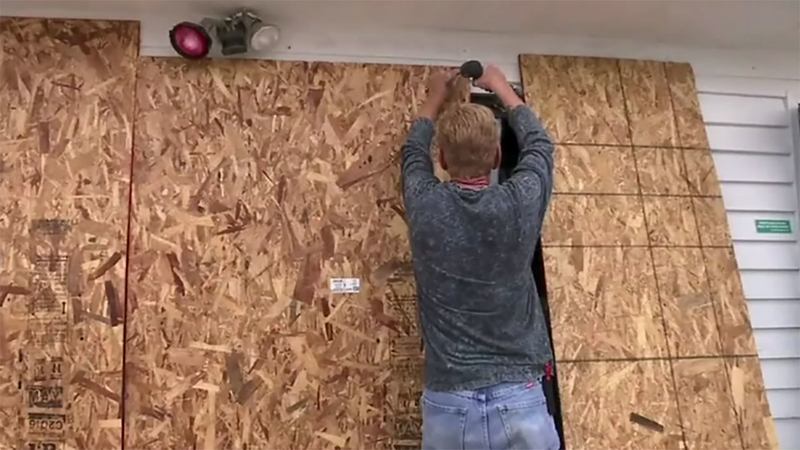 In Wrightsville Beach, residents get ready

Even though the latest storm track shows Hurricane Matthew taking a turn from the North Carolina coast, residents are still preparing.

Some families on vacation from out of state were packing it up and heading home early. Others were actually in Wrightsville Beach to escape the storm's wrath.

"We were evacuated," said Virginia Lanczkowski. She and her husband chose to come to Wrightsville Beach after having to evacuate Myrtle Beach, S.C.

"We were more concerned I think with losing power than getting wet," Robert Lanczkowski said.

Someone should tell these kids.. in @WrightsvilleNC, "evacuate" means head WEST! A look South from Mercer's Pier. pic.twitter.com/3SHKf90DUt

Still, while it is safer here, New Hanover County has declared a state of emergency ahead of the storm. Schools and some offices are closing early on Friday, while areas south of New Hanover have even closed school completely on Friday.

But a lot of locals, like Brown, seem to be staying put.

Not just surfers, who were out looking for the next great wave, but families and folks who've "seen it before."

Despite warnings from the White House on down to the governor, lots of people told ABC11 they plan to ride it out.

"This is one of the things that comes with living in a coastal community," said Julie Small, of Wrightsville Beach. "I was born and raised here, my dad's kind of a storm rider so we've always stayed and this one seems like it's taking a much better turn for us."

On Thursday afternoon, Gov. Pat McCrory expanded the State of Emergency to all 100 counties.

"This declaration will allow us to use further resources throughout the state to assist with the storm response here at home and to our neighboring states to the south," McCrory said. "It will also allow us to better support evacuees heading further inland from impacted areas, including the North Carolina coast."

My buddy Russell and his catch of the day #blacktipshark at Johnny Mercer's Pier. "It's been all sharks for 2 days." pic.twitter.com/lQRUwzyiq2

The governor previously declared a state of emergency on Monday for 66 eastern and central counties.

Tom Dougherty is one of many people heading to the coast to secure any beach property and boats ahead of Hurricane Matthew.

He left for Wilmington on Wednesday afternoon.

"Don't want to take any chances, there's still going to be rainfall and storm surge is going to be big," Dougherty said. "Batten down the hatches with a condo, I've got furniture on the deck, just going to make sure that the home is ready to go."

Local at the pier: "Nobody's boarding up yet because we don't know if it's gonna wiggle or wobble after Florida." pic.twitter.com/dqmNlvjO4w

While some head to the coast, others are heading inland. Some evacuees are even escaping to North Carolina.

"We made the choice to go to Raleigh just because it was cheaper than a hotel," said Justine McGovern, who lives in South Carolina.

McGovern, her sister Kristina, and her fiancé, Stan Vaitis, are all teachers in Hilton Head, S.C.

"Yesterday they were like, 'School is closed for three days,'" said Kristina McGovern.

They arrived in Raleigh on Tuesday night to stay with family and ride out the storm. On the road they encountered heavy traffic on the way out and say it was even hard to get gas.

Before they left, the three native New Yorkers made sure to board up their home.

A home in South Carolina is secured before Hurricane Matthew

"We've never experienced a hurricane before. This'll be our first one, so some pretty strong winds in the past but never a Category 2 hurricane," Vaitis shared. "We don't know what to expect."

While they wait for the worst in Raleigh, others are making their way here for NC State versus Notre Dame football game on Saturday.

The popular sports bar usually plays host to away team fans, and this Saturday it's hosting a Notre Dame alumni party outdoors.

"Expecting well over 300 people to attend, we've got tents being put up, bars being put in," said Innanella.

As far as the game's status, an NC State athletics spokesperson said the game is still scheduled, but they are monitoring the forecast.