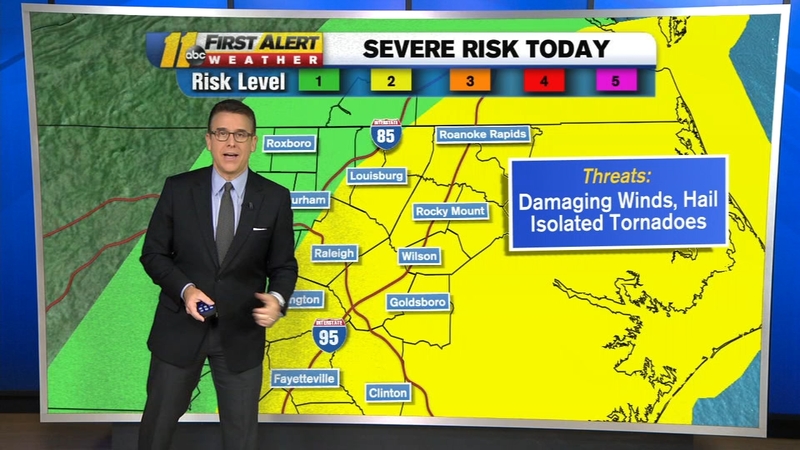 RALEIGH, N.C. (WTVD) -- A stalled frontal boundary will become the focus for unsettled weather today. Upper-level energy will stir up showers and thunderstorm activity as low-level moisture gets drawn northward and the frontal boundary buckles northward. Much of this activity will remain north of us this morning, rumbling across southern Virginia. However, in the afternoon we can expect some thunderstorms to develop along outflow boundaries across eastern North Carolina that could become severe from southeastern Virginia across eastern North Carolina into northeastern South Carolina. The strongest of these afternoon thunderstorms will be capable of damaging winds, downpours and possibly even an isolated tornado.

As the upper-level energy pushes to the east tonight it will spin up an area of low pressure off the Delmarva Peninsula coast. As this low spins up, that frontal boundary will be driven southward again, allowing northern areas to dry out with perhaps a few lingering showers and thunderstorms to the south. There will be a brief respite from rain however, as the next upper-level disturbance crosses the area on Tuesday, forcing the front to ripple northward once again.

This will be the first in a series of disturbances aloft to round the base of a broad upper-level trough which will carve out a spot across the East.

As far as temperatures are concerned, with the trough becoming established over the area and the frontal boundary remaining over or just south of the region, we expect the temperatures will gradually decline through the next few days. In fact, high temperatures are likely to be in the 70s for Tuesday, and possibly Wednesday and Thursday as well -- some 10-15 degrees below average. As there will be extensive cloud cover throughout this unsettled period, our low temperatures will be closer to normal.

The pattern slowly changes late in the week with the upper-level trough lifting out of the East and a subtropical ridge gradually becoming established by next weekend.

Have a good day!
Steve Stewart