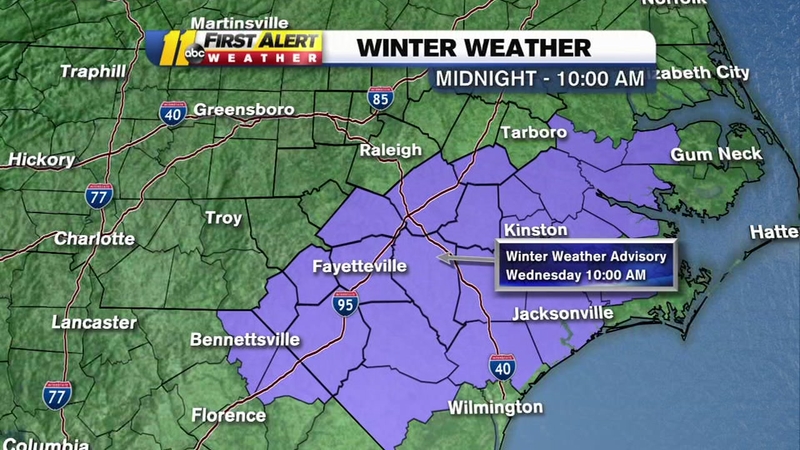 WAKE COUNTY (WTVD) -- Crews were treating bridges and overpasses with brine in the Raleigh area as a precaution in case parts of the Carolinas have winter precipitation this week.

The North Carolina Department of Transportation was sending 12 trucks out to treat elevated roadway structures in Wake County on Tuesday and could expand its efforts Wednesday if snow stays in the forecast.

The National Weather Service in Raleigh said light frozen precipitation including freezing rain was possible, especially for areas south and east of Fayetteville and Goldsboro through Wednesday morning.

Harnett and Wilson county have been added to the winter weather advisory. pic.twitter.com/4SsPn0xJAP

Mainly east of I-95 (southern Cumberland, Sampson, Robeson counties). No major accumulation is expected right now, but people heading back to work in those areas just need to be careful on bridges and overpasses.

On Friday, there is a small chance for a light mix early Friday morning, Bell said.

A winter weather advisory has been issued for parts of the Carolinas that could face freezing rain.

The National Weather Service issued the warning for about 10 counties in eastern North Carolina and South Carolina's Dillon and Marlboro counties through Wednesday morning.

Road crews and hardware stores are bracing for wintry weather later this week.

The cluster of counties runs along Interstate 95 and to the south and east. Forecasters say Fayetteville, Smithfield, Wilson and Goldsboro could see accumulations of several hundredths of an inch. The National Weather Service says that could create limited hazards on roads and bridges. Crews were out applying brine on Tuesday.

Forecasters were continuing to monitor the possibility that another wave of wintry weather could hit western North Carolina and the South Carolina Upstate later in the week.

If snow remains in forecasts, crews will brine again on Wednesday, around the same time, concentrating on interstates and other divided highways.