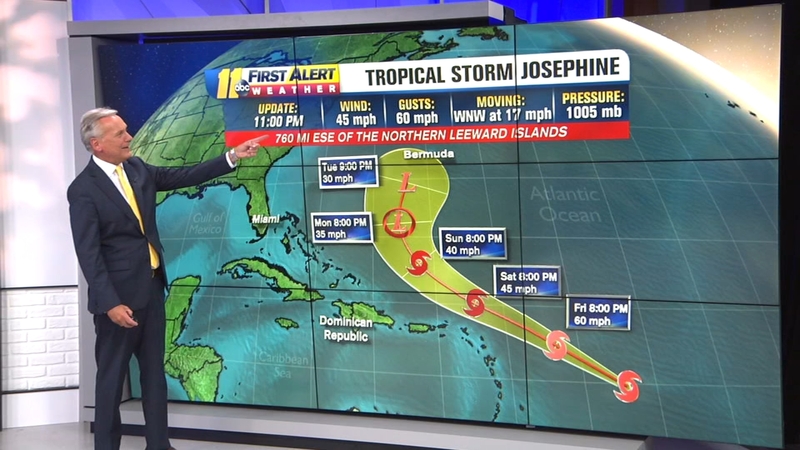 RALEIGH (WTVD) -- Tropical Storm Josephine and a low-pressure system over North Carolina are being monitored by the National Hurricane Center.

Josephine formed Thursday morning just under 760 miles east-southeast of the northern Leeward Islands. The storm has maximum sustained winds of 45 miles per hour and is moving west-northwest at 17 miles per hour, according to the National Hurricane Center.

Still, Josephine is not expected to be a problem for North Carolina, or any of the continental United States.

The storm's projected path has it traveling north of the Leeward Islands and Puerto Rico. Models then turn the system even more north, keeping it out to sea before it dies out as an area of low pressure system around Tuesday.

Before Josephine, the previous record for the earliest J-named storm to form was Jose, back on Aug. 22, 2005.

Low pressure over eastern North Carolina has a 30% chance of development as it moves away from the coast. pic.twitter.com/NyhgCHC1pM

The system is expected to move off shore and into the Atlantic Ocean. Once there, it has a 20 percent chance of developing into a tropical cyclone over the next couple days.

Last week, Hurricane Isaias made landfall in southeastern North Carolina Monday night and deteriorated to a tropical storm. It triggered a string of tornadoes on the east coast, one of which killed two people in Bertie County.