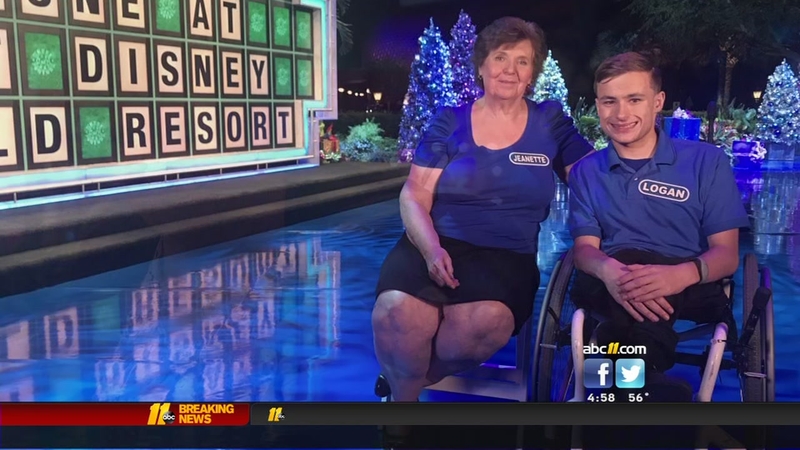 A Roxboro teen and his grandmother are competing for some big bucks on Friday night's special 35th-anniversary edition of "Wheel Of Fortune" at Disney World.

"Wheel of Fortune" is celebrating its 35th season at Epcot, which is also celebrating it's 35th birthday, by shooting a slew of special episodes at the most magical place on earth.

The Roxboro teen competed with his grandmother Jeanette Abdo which was a dream come true for Abdo, a lifelong fan.

"I just went online, I never thought anything else about it, and a couple months later, I got an email to come to the audition," Abdo said.

She said the opportunity couldn't come at a better time.

Her grandson, Logan Abdo, was just getting out of the hospital after battling a double kidney infection.

"I was like in total shock," Logan said. "I was like OK then. Well, now my life is about to be flipped upside down."

Logan has VATER syndrome, a series of birth defects; he just had one of his kidney's removed but that doesn't stop him from loving the stage.

He's the frontman for a scream-core metal band, "Mirada."

The chance to take on the national spotlight on "Wheel of Fortune" is also a dream come true for the 18-year-old, who hopes to embolden others who may deal with similar issues.

The wheelchair-enabled teen said the 15 minutes of fame are less about money and more about respect.

"I want it to be something special, not out of pity, out of like respect of like, 'Dude, this kid's got something,'" Logan said.

He's asking everyone to tune into ABC11 Friday night to catch him on "Wheel of Fortune" at 7:30 p.m. to cheer him on.

If you'd like to help Logan with medical expenses as he continues his fight, you can check an event his band - and other local bands - are putting on.

----------------------------
ABC11 has decided to slowly reduce the number of stories on the website that have a comments section. We believe very strongly that our audience should have an opportunity to discuss and debate events in our world, however, we have not been able to moderate the comments as well as we would like. Instead of hosting a platform that could allow a few loud and ugly voices to dominate a conversation, we want to encourage everyone to join us on our social media platforms and speak out there. Facebook: facebook.com/ABC11 Twitter: twitter.com/ABC11_WTVD
Report a correction or typo
Related topics:
arts & entertainmentroxborofeel goodwheel of fortune
Copyright © 2021 WTVD-TV. All Rights Reserved.
TOP STORIES
Amber Alert issued for 1-year-old Randolph County girl
Everyone should get tested prior to indoor gatherings, CDC says
Toyota to build lithium battery plant in NC
50 mutations in omicron could be its downfall, data shows
Why feds are warning it could take months to get a passport
Raleigh Police plan to crack down on speeding drivers
Show More
This day in history: Pearl Harbor attacked
CEO of American Airlines retiring
Durham, Zebulon make political history with new mayors
NC unemployment improving but businesses still struggle to hire
Carrboro police investigate 2 weekend shootings
More TOP STORIES News