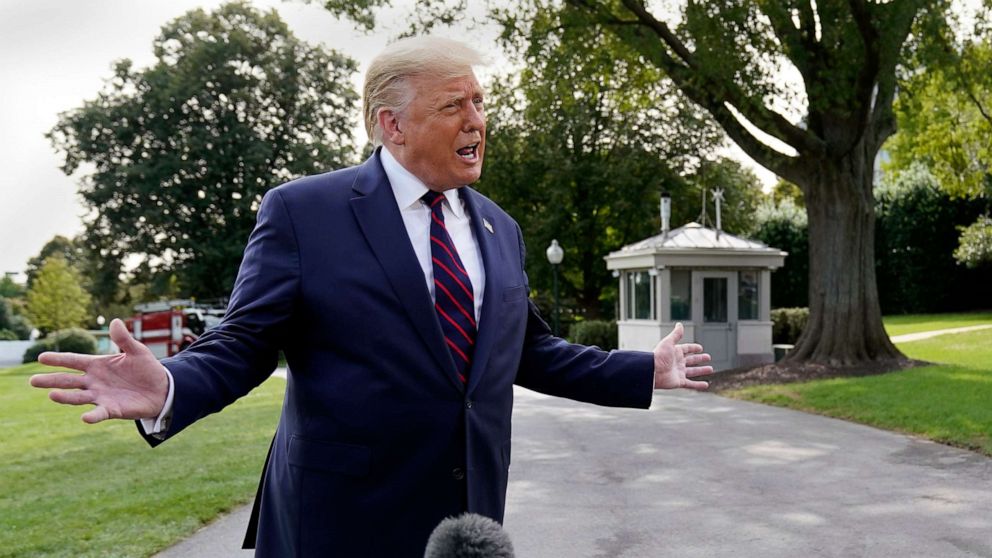 The White House is signaling a renewed interest in negotiations with Congress over the next coronavirus stimulus relief package after House Speaker Nancy Pelosi vowed to keep the House in session until a deal with Republicans and the administration is hammered out.

President Trump on Wednesday urged Republicans to embrace a larger coronavirus stimulus package seemingly stepping on the Republicans' more conservative approach, as the major parties continue to struggle to break a stalemate over a fifth relief bill.

"Democrats are 'heartless.' They don't want to give STIMULUS PAYMENTS to people who desperately need the money, and whose fault it was NOT that the plague came in from China. Go for the much higher numbers, Republicans, it all comes back to the USA anyway (one way or another!)," Trump tweeted.

The White House is specifically honing in on a long-shot plan put forth by the House Problem Solvers Caucus, a bipartisan group consisting of 50 members.

Chief of Staff Mark Meadows said Trump is open to the caucus' proposed $1.5 trillion stimulus package that was introduced earlier this week in an effort to break a months-long deadlock.

He called the bipartisan caucus' proposed plan "very thoughtful" and said that if Pelosi is willing to stay in session until a deal is reached, that one could be made.

"I think probably the biggest obstacle continues to be the amount of money that is outlined for state and local help," Meadows said.

The proposal from the bipartisan caucus is largely symbolic and some members have privately acknowledged it has little chance of passing. Several Democratic committee chairs rejected the proposal outright and said it falls short of what is needed.

"Having seen no progress on a new COVID-19 relief package in four months, and in recognition of Americans' increasing suffering, the Problem Solvers Caucus (PSC) has developed a comprehensive, bipartisan framework to meet the nation's needs for the next 6-12 months, that can pass both chambers of Congress and be signed into law by the President," the caucus said in a release.

Pelosi and Senate Minority Leader Chuck Schumer said in a statement that they were encouraged by the Trump administration's recent overtures.

"We are encouraged that after months of the Senate Republicans insisting on shortchanging the massive needs of the American people, President Trump is now calling on Republicans to 'go for the much higher numbers' in the next coronavirus relief package," Pelosi and Schumer said in a joint statement.

"We look forward to hearing from the President's negotiators that they will finally meet us halfway with a bill that is equal to the massive health and economic crises gripping our nation. By the end of the week, 200,000 Americans will have died from the coronavirus. The lives and livelihoods of the American people depend on Republicans abandoning their obsession with doing as little as possible while the coronavirus rages through our nation," they said.

But a short a time after Trump tweeted, his press secretary quickly stepped in and said Trump was referring to a "skinny" bill proposed by Senate Republicans that failed to pass in a vote late last week.

"What the president was referring to was the $500 billion bill that passed the Senate, the Phase 4 plan that ... got 50 votes in the Senate. It's that $500 billion skinny proposal but it didn't include direct payments. So he wants more than the $500 billion dollars and he is very keen to see these direct stimulus payments," White House Press Secretary Kayleigh McEnany said Wednesday during a press briefing.

GOP Rep. Liz Cheney, a member of leadership, also shot down the president's pitch for a larger bill, telling reporters, "I would be hesitant to make a commitment about a level that is that high."

"I'm really concerned about funds that have been appropriated and haven't been spent yet. I think the real solution to this is we've got to get the economy going again," she added.

On Tuesday, Pelosi told members of the Democratic caucus on a private phone call that the House will remain in session until Congress passes another coronavirus relief bill, per sources on the call.

"We are committed to staying here until we have an agreement, an agreement that meets the needs of the American people," Pelosi said during an interview with CNBC on Tuesday shortly after the caucus call. "We're optimistic that the White House at least will understand that we have to do some things."

House Majority Leader Steny Hoyer later reiterated to reporters that the House will likely remain on a 24-hour recall throughout the month of October in case a deal is reached and members will be called back for a vote.

This comes as a number of moderate Democrats are growing anxious and jittery over the lack of coronavirus relief for their ailing communities just weeks ahead of the election and several months after Congress passed its last major bill to address the public health crisis.

Pelosi and Hoyer are facing criticism from some moderate Democrats about their handling of the impasse over coronavirus relief.

Some members of the New Democratic Coalition - a large caucus of moderate House Democrats that includes many members of the freshman class - grew frustrated with the situation on a call with Pelosi and Hoyer on Tuesday.

"When I speak to my constituents, they don't ask me why Mitch McConnell isn't doing anything," Rep. Kathleen Rice, D-NY, said, according to a source familiar with the call. "They ask me what our Democratic majority is doing to work around him."

Pelosi - who clashed with Rice over the speakership in 2018 - encouraged her to poll her colleagues on whether they wanted to stay in town until reaching a deal with the White House.

"I am following my convictions, and my conviction is to actually do my goddamn job and come up with a solution for the American people," Rep. Abigail Spanberger, D-Virginia, a freshman from a Republican-leaning district in Virginia, said on the call, in response to a colleague who urged Democrats to hold out against Republicans.

After some discussion of being in Washington rather than at home, Pelosi told members she would be in Washington regardless of the House schedule, deferring to Hoyer on whether the House would stay in session, according to Democrats familiar with the call.

Caucus leadership is polling members of the group to get a better sense of whether they will remain in Washington until a deal is made, or return home to their districts instead.

"What came through loud and clear was a unanimous desire to see Congress take action to help our constituents," Rep. Derek Kilmer, D-Washington, the chair of the group, told ABC News, declining to comment on specifics of the conversation.

"Time is short, the needs are urgent, the suffering is immense, and trading zero for less than what we had aspired is not a reasonable alternative," Rep. Dean Phillips, D-Minnesota, said.

"The caucus is having a robust conversation publicly and privately about how to proceed, and most importantly, that we must proceed," he said.

The House passed a $3.4 trillion stimulus measure in May, but Republicans rejected it as being too costly. Senate Republicans pushed for what they call a "skinny" bill that would provide just $350 billion in new spending but Pelosi has insisted Democrats will not accept anything less than $2.2 trillion.

"A skinny deal is not a deal," Pelosi privately told Democrats Tuesday morning. "It is a Republican bill."

Asked by CNBC if she'd be willing to pass a "skinny" deal now and reconvene with Republicans on outstanding issues later, Pelosi said "there is no later with this administration."

"This is the opportunity. And the skinny deal is a Republican bill ... that's not a deal at all," Pelosi said. "They're making a skinny -- in fact, Chuck Schumer and I call it an emaciated -- proposal for a massive problem."

"We can fiscally spend the appropriate amount of money to meet the needs of the American people," she added. "And by the way, it's stimulus. We are a consumer economy and the more we have, whether it's food stamps or unemployment insurance ... that is stimulus to the economy."

Democratic Rep. Stephanie Murphy of Florida was asked if she thinks Democratic leaders are dragging their feet in negotiations to keep victory from Trump's hands ahead of Election Day.

"I don't usually comment on people's motivations because who knows what's going on between us, you know, in people's mind," Murphy told reporters on Capitol Hill Wednesday. "All I know is that the need that is expressed to me in my community is dire, and my community is waiting for the government to provide additional resources, as they try to get through this pandemic and economic crisis."