'He has a gun:' Woman held captive by boyfriend slips note to veterinarian for help 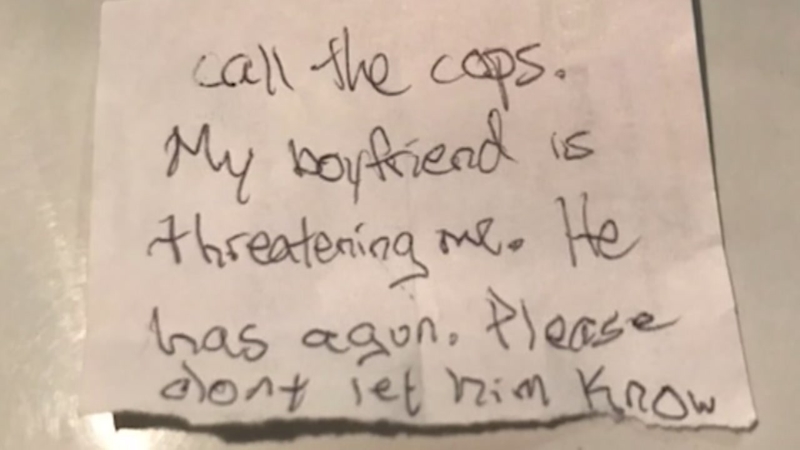 DELAND, Florida -- A woman being held captive by an abusive boyfriend got help from an unlikely place, and it may have saved her life.

The Volusia County Sheriff's Office said the 28-year-old woman was beaten Wednesday and threatened at gunpoint by her boyfriend, who refused to let her leave their home for two days.

She spent Thursday recovering from her injuries at home.

On Friday, she convinced him to let her take their dog to the DeLand Animal Hospital, but he insisted on coming with her. He was armed with a loaded gun, authorities said.

While she was at the veterinary hospital, the woman slipped a note to a staff member that read, "Call the cops. My boyfriend is threatening me. He has a gun. Please don't let him know."

The employee called authorities who arrested the boyfriend, 39-year-old Jeremy Floyd, and found his gun. Floyd is also a convicted felon.

Deputies said the victim told them that he repeatedly beat her on Wednesday night, threatened her at gunpoint, and physically prevented her from leaving the house.

During the incident on Wednesday, officials said the two fought over the handgun, and it went off inside the house.

On the way to the veterinarian, Floyd allegedly pointed the gun at her again, threatening to kill her and her family.

She was taken to the hospital where she was treated for a head injury, a black eye and bruised arms.

Deputies also took her to the home, where they found two bullet holes. One of the bullets passed through the drywall and into another room.