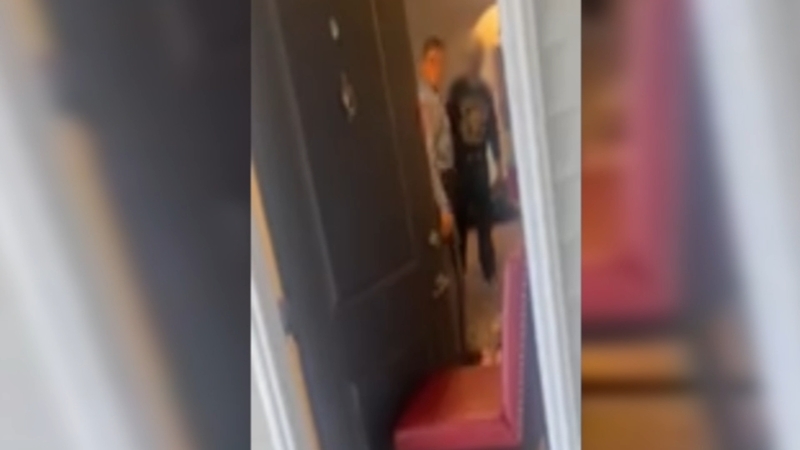 RALEIGH (WTVD) -- A Raleigh woman's terrifying encounter of coming face to face with two men who broke in to her home is now prompting a bigger conversation about what happened to Shanay Porter and how police treated the men they found inside her apartment.

"When I put my key in the door, it was open," Porter said describing the moment Tuesday morning when she arrived home at her Brier Creek apartment. She said walked into a nightmare.

Two men she did not know were lounging in her living room, eating her food, and wearing her ex-boyfriend's clothes. She says one of them even took a shower.

A neighbor's doorbell cam showed two strange men, the night before, twisting door knobs in the breezeway. Porter says her door was locked. But, somehow they broke in.

"I just looked at him and said, 'who are you?' And he started coming toward me and I hurried up and closed the door," Porter said. "I didn't know what to think or what to say. I was so speechless. I've never seen anything like this before."

Emotions took a new turn when Raleigh police officers responded to Porter's call to 911. As officers questioned the intruders, Porter and her neighbors grew angry and confused about what they saw as a lack of urgency from police.

The suspects in her apartment were both white. Porter, who is Black, calls it a double-standard.

"If I was a white woman and I called and said it was two Black intruders in my house, I feel like they would've had them out of my house immediately," Porter said.

Shanay Porter came home to two burglars in her Raleigh apartment this week. Tonight, she tells us, because the intruders were white the incident was downplayed by police. #abc11 AT 11 pic.twitter.com/Q8EyOADuUz

In another cell phone video recorded by a neighbor, Porter is heard asking officers, "What I don't understand is why these two men are still in my house?" One officer responds, "Well, right now we're trying to figure out what's going on."

A neighbor tells the officers, "She is a victim and I want to see her treated as a victim. There is a foreign man in her home."

An officer tells them, "You have to understand. That's why we have them detained in there ma'am. "At this point in time what's safest for us and every single person out here is to deal with them in that situation; detain them and bring them out afterward."

The neighbor replies, "Get them detained outside. You can detain them outside."

35-year-old Charles Merry and 45-year-old Brian Capell were both eventually arrested. Each man is charged with breaking and entering and remains in the Wake County Jail.

ABC11 reached out to RPD about Porter's allegation that her case was treated differently because of the race of the suspects. In a statement, the department said:

"The two men in this incident were arrested. This is a criminal investigation. The Raleigh Police Department is reviewing the actions of the officers internally to ensure that policy and procedure were followed."