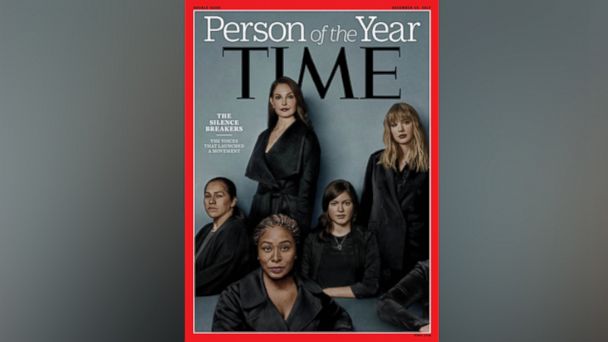 The "silence breakers" - the women behind this year's #MeToo movement against sexual harassment - are Time magazine's 2017 person of the year.

"The 2017 person of the year is the silence breakers, the voices that launched a movement," Time editor-in-chief Edward Felsenthal said today in making the announcement on NBC News' "Today" show.

"And it began by individual acts of courage by hundreds of women and some men, too, who came forward to tell their stories of harassment and assault," he added.

Social activist Tarana Burke created the "me too" movement a decade ago to help sexual assault survivors in disadvantaged communities.

Actress Alyssa Milano was one of the first high-profile women to use the "me too" hashtag this year after several actresses came forward with allegations of sexual assault against movie producer Harvey Weinstein.

"If you've been sexually harassed or assaulted write 'me too' as a reply to this tweet," she wrote on Twitter in October.

"Women posting 'me too,' I think, gave them the courage to not have to tell their story or not have to name their predator but to just stand in solidarity," Milano said in an October interview on ABC News' "Good Morning America."

Weinstein has repeatedly denied any allegations of "nonconsensual sex."

Featured on the current Time person of the year cover are actress Ashley Judd, singer Taylor Swift, former Uber software engineer Susan Fowler, California lobbyist who Adama Iwu and strawberry picker Isabel Pascual. They all went public with the stories of sexual misconduct they said they faced in the workplace.