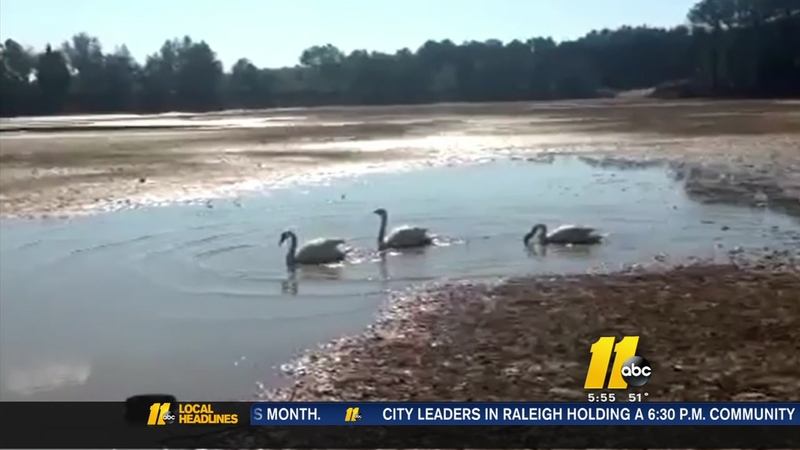 VASS TOWNSHIP, NC (WTVD) -- Hurricane Matthew dumped a whole lot of water on North Carolina, but one lake has dried up because of it.

The lake was once home to fish, frogs, flora and fauna, and there's at least one species of bird that can't hop, swim or even fly somewhere else: swans.

"They're pinioned, which is a surgical amputation of the end of the wing," conservationist and bird expert Kindra Mammone explained to ABC11. "They cannot move themselves to another body of water."

The swans live at a Moore County development called Woodlake, a sprawling and once-sparkling development featuring homes, townhouses and golf courses that surrounded a man-made lake.

Woodlake Dam supported the lake, but a history of negligence and safety issues -- exposed by an ABC11 I-Team investigation -- were further exacerbated by the hurricane. The North Carolina Department of Environmental Quality has ordered the Woodlake owners to indefinitely breach the dam until they finalize a detailed plan to fix it.

Woodlake residents called Mammone, who runs the Chapel Hill-based animal rescue organization called Claws Inc., to check on the swans and potentially save them.

"I feel helpless, I feel angry for the animals," Mammone said. "These animals were placed there by humans. Humans are responsible for them."

Mammone said she met with Woodlake's property manager, Julie Watson, who promised Mammone the swans would be taken care of. (Woodlake's owner is a German investor, Illya Steiner, based in Hamburg. Both he and Watson have ignored multiple I-Team requests for interviews or even comments.) Mammone says she has not been allowed back on property since.

Complicating matters is the fact that the swans are not native to Woodlake or even North Carolina; they were bought to enhance the lake development with their presence and beauty. The NC Wildlife Commission, thus, has no jurisdiction on the swans' welfare. Instead, the Moore County Animal Control is the only agency that could help.

On Monday, agents with Moore County Animal Control confirmed to ABC11 they are trying to help, and they visited Woodlake last week. In a report obtained by the I-Team, investigators explained:

"We went to the dam area where the swans were swimming. Upon arrival several swans approached the bank. The swan identified as George (elder swan with a pinioned wing) came up on a bank and appeared healthy and in good plumage...The birds I observed appeared compatible...they also had natural food present such as grass alongside of the bank, small insects, etc. I was not able to substantiate any allegations of lack of care or accommodations for the birds."