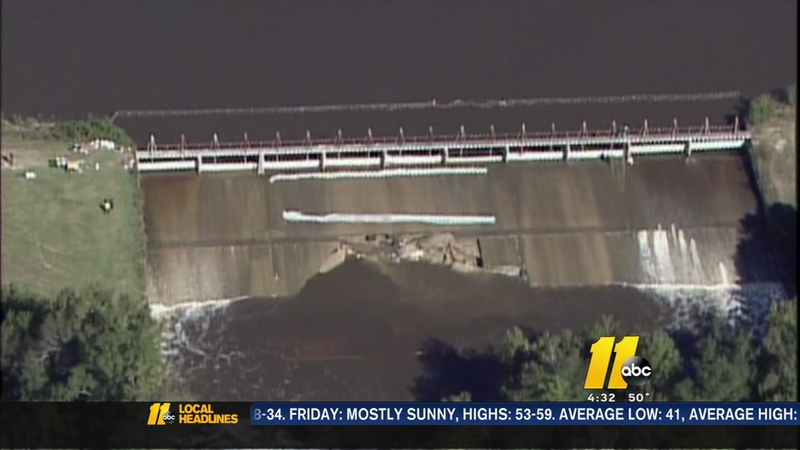 A Moore County judge on Thursday awarded residents $161 million from the maligned owners of the Woodlake Dam, who continue to be either unwilling or incapable of fixing the dam that nearly breached during Hurricane Matthew.

"It wasn't a surprise that we prevailed in court," Charlie Jones, a Woodlake resident and lead plaintiff, told ABC11. "Their behavior has been egregious. We had a mindset on a specific course of action, and now we have to start a process to get the dam and the lake back - and we know that won't be easy."

The multi-million-dollar penalty was handed down without anyone from the defendant, Woodlake CC Corporation, in attendance. The judgment is the latest chapter in a years-long saga of mismanagement and negligence on the part of Woodlake, and lax enforcement from state regulators.

According to the judgment, $23.7 million is awarded in compensatory damages to those who own waterfront properties, and $16.9 million to non-waterfront. Citing negligence, the judge ordered $129 million in punitive damages.

"The purpose of our lawsuit was we saw no other way to get our lake back," Jones said. "The key to that lake is a dam, and if we don't own it, the dam or find partners that want to help us bring this place back to life, then we're just watching our property values sink. A lot of my life savings are in that house. Just to stand by and watch a lifestyle and homestead fall to pieces - that's not the way I am. and that's not the way a lot of us are."

Though residents said Watson has been involved with Woodlake for years, records show Steiner later bought the property from another German investor, Ingolf Boex.

At first, state officials hoped their own lawsuit in March 2017 could coax Woodlake to move on repairing the dam. Under the terms, Woodlake had until April 10 (25 days from March 15 to share with the NC Department of Environmental Quality firm engineering plans to build a temporary breach in the dam.

Last summer, officials at the Attorney General's Office and Department of Environmental Quality effectively labeled the situation at Woodlake to be that of an emergency, requiring immediate action that must be paid by taxpayers.

"Breaching the dam is a measure essential to provide emergency protection to protect life and property downstream," NCDEQ Secretary Michael Regan wrote in a letter dated June 8, 2017. "Under this declaration, the Department intends to expedite the procurement of qualified dam engineers for the design and construction oversight for the temporary full breach of the damaged Woodlake Dam."

Julie Watson refused to speak to ABC11 on camera but vowed to welcome us to Woodlake in the future (we've never met her despite several previous calls and visits before). She told the court that Steiner, her business partner and financier, visited North Carolina, and is the one responsible for sending the money needed to pay for dam repairs.

Like before, however, those repairs never happened, and contractors were never paid. Currently, taxpayers may be on the hook for at least $1.5 million.

A spokeswoman for NCAG Josh Stein told the I-Team "We are continuing to monitor the progress towards completing the Woodlake project, which includes establishing permanent groundcover. The final stage of stabilization should hopefully be completed by the end of this spring. Once completed, and DEMLR has assessed all of the costs and submitted them to this office, we will be able to proceed with a cost recovery action."