Wounded vet can fish thanks to special rod and reel 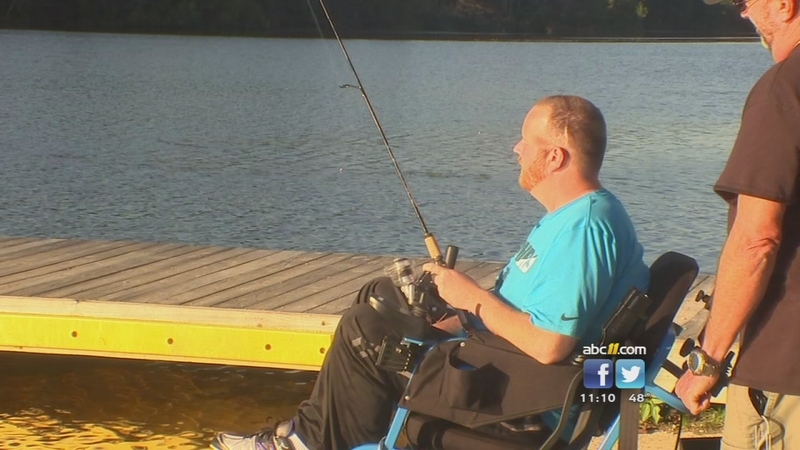 Wounded vet can fish thanks to special rod and reel

FORT BRAGG, NC (WTVD) -- Next to God, country, and family, William Stewart will tell you he loves fishing. But for several years now, fishing has been mostly a spectator sport for the Army specialist. Because of his injuries he wasn't able to haul in what he caught.

In 2012, Stewart was critically wounded during a mortar attack in Afghanistan. After months of rehab, in 2013, he came home to a hero's welcome and a new handicapped-accessible home. But getting around was tough. Last December a veteran's group gave him an electric wheelchair with tracks so he could go to the beach and fish.

"Just imagine him sitting at the beach with a rod and for an instant he has traveled back to a time when he was not injured," explained his stepdad James Wilburn.

But for Stewart, fishing was a 2-man job because while he can cast a line, he couldn't reel it in. That is until now. Terry Snyder's organization Operation North State has set Stewart up with three high-tech electric motor fishing reels. The group sponsors fishing tournaments around the state for wounded warriors.

"It's got a trigger on it so Will can put his hands on it and cast just like he normally would do. It's got a lot of horsepower to it," said Wilburn.

"We run six different venues around the state to take guys and gals out and let them do something that means a lot to them, get them out of the house, and put a smile on their faces," Snyder explained.

And a soldier who fought for our freedom now has the freedom to fish.

Operation North State is looking for other wounded warriors to help. For information, go to: http://www.operationnorthstate.com/about-us