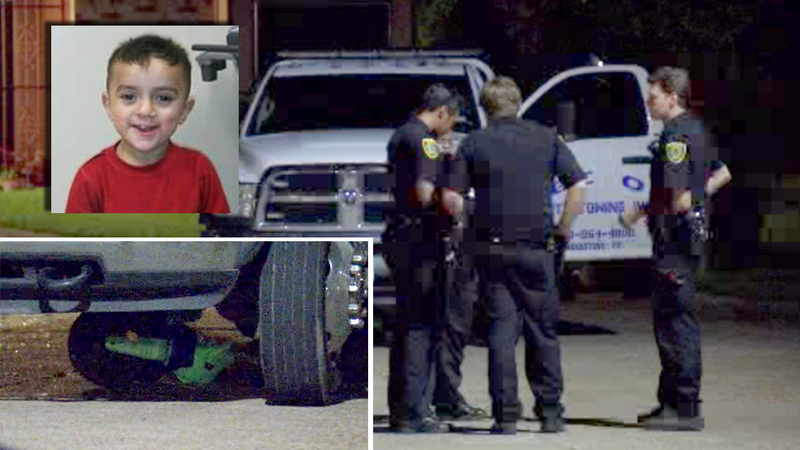 HOUSTON -- Police say a 4-year-old child riding a tricycle died after being run over by a wrecker driver in northeast Houston, Texas Wednesday night.

Family says the boy is Nestor Delao Jr. but he goes by "Junior."

The accident happened just a few feet from the child's home.

By Thursday morning, neighbors and family had left balloons, candles, teddy bears and flowers at the spot where Junior died. He was one of five siblings, the only boy.

"I would do anything to bring him back so I could have him one last time and say, 'Don't go outside Junior,'" said Lily Delao, his sister.

Neighbors say Junior and another little boy were racing their bikes. Junior was on his big wheel, coming down from a driveway at the end of the cul-du-sac. Investigators say a tow-truck driver had just dropped off a car at a nearby house; he was rounding the corner, didn't see Junior and ran him over.

The 4-year-old died was pronounced dead at Memorial Hermann Hospital.

The other boy, 5, was not hurt. His mother spoke to ABC11's sister-station KTRK:

"All these children are like our children. It's just, we need to teach them that the streets are not a playground," said Cynthia Carter, a neighbor.

Families on this street are here for one another, but it's clear the mood has changed. There are no kids laughing in the street or riding bikes.

"I can't get him back, that's it, there's no turning back," Lily said through tears.

The tow-truck driver will not be charged with anything. Police say this is simply a horrible accident.