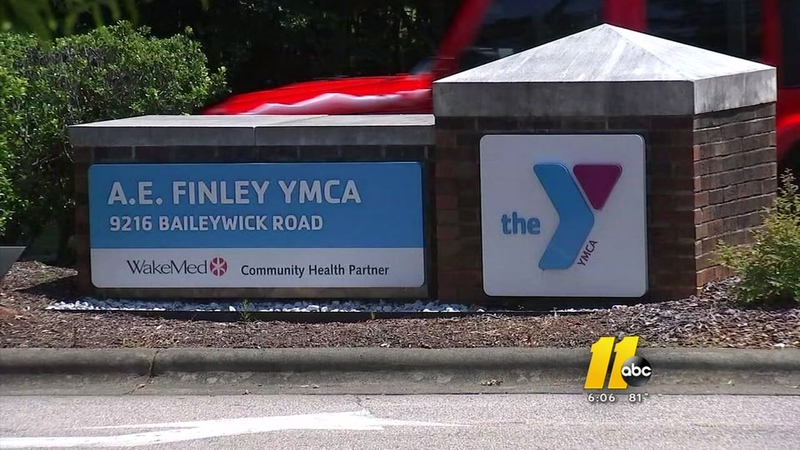 RALEIGH (WTVD) -- Justine McGuire showed up to the A.E. Finley YMCA Friday ready to see her son in a scrimmage. Her child, 6-year-old Holden Carusetta, was enrolled in the center's Basketball Camp. Instead of seeing the boy gearing up to play, McGuire says she found her boy being held down on the floor by one child and another child rubbing his privates on Holden's face.

"I immediately ran over there and grabbed the kids off my son," she said.

Mom tells ABC11 she went to report the incident to staff and was told not to make a big deal about it.

"He told me, 'I know it's kind of gross, but boys will be boys, horseplay is typical with boys this age and I feel like you might be overreacting a little,'" McGuire explained. "I absolutely didn't think it was overreacting. That was sexual assault and I wanted something done."

McGuire claims she was discouraged from going to police. She reported the incident anyway and officers are now investigating.

"[The staff is] creating an atmosphere where children are allowed to be assaulted," she said. "I think it's terrifying. I think that they're pacifying sexual assault. I think something needs to be done. He doesn't want to go back."

Sending your children to summer camp at The Y does not come cheap. It costs parents who are not members $222 a week for one child to be enrolled in the Basketball Camp.

McGuire had two children in the program and paid out almost $450. She said she feels when you are shelling out this type of money, you should be assured your kids are safe.

"Staff were trying to sweep me under the rug, trying to shut me up, and trying to stop me from getting police involved," she said.

The YMCA would not comment on whether McGuire was discouraged from going to authorities, and would not allow an administrator to speak with ABC11 about the incident on-camera.

Instead, the organization issued this statement:

For more than 30 years, the A.E. Finley YMCA has provided a safe, nurturing environment for thousands of children at YMCA Summer Day Camps and other youth programs.

We take the concerns of all parents very seriously. Since this matter was brought to our attention, we have been in close contact with parents, our staff and local authorities and are fully cooperating with the investigation being conducted by local authorities.

The children alleged to be involved in the situation are not part of camp at this time.

To protect the privacy of all minor children in YMCA programs and the integrity of this investigation, we cannot discuss details in the media. We continue to focus our efforts on communicating with parents of the children in our care.

We provide ongoing training to our staff to ensure quality care and we reaffirm our commitment to serve families through the safe, enriching programs they have grown to expect.

The move to suspend the other children involved hasn't changed McGuire's mind on how the YMCA handles its responsibilities.

"They don't seem to have safety of these kids their top concern at all. They seem to be concerned about protecting themselves and their organization," McGuire said.

Holden and his brother have not gone back to the YMCA since Friday.