Kidnapper was found dead with pistol in hand off US-64 after exchanging gunfire with Raleigh officer, police say 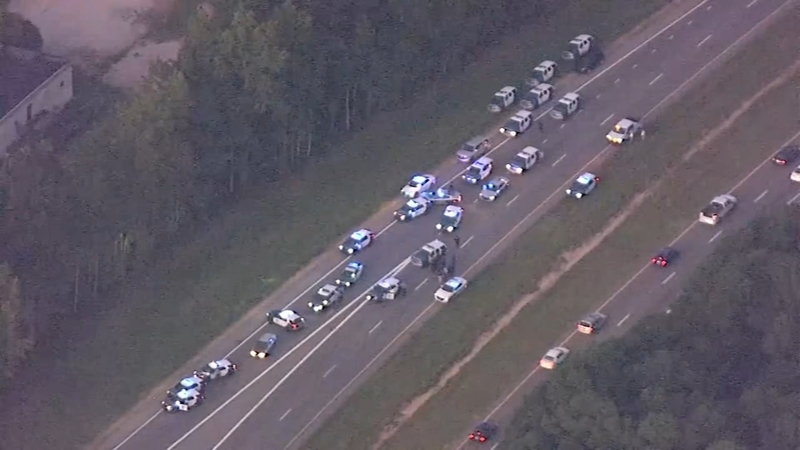 WAKE COUNTY, N.C. (WTVD) -- The Raleigh kidnapping suspect who was found dead in the woods after a police chase that shut down part of US-64 near Zebulon last week was found with a gun in his hand after exchanging fire with an officer, a newly released police report shows.

The City of Raleigh released its 5-day report Tuesday morning.

According to the report, around 11 p.m. on Sept. 23, the Durham County Sheriff's Office contacted the Raleigh emergency communications center, requesting Raleigh police officers help to find a missing person. The sheriff's office provided a vehicle description.

Raleigh officers found the vehicle near Buck Jones Road and Bashford Road but when they attempted to stop it, the driver took off.

The report states that the Raleigh Police Department policy "only allows for vehicle pursuits when the suspect is believed to have committed a violent felony." Officers did not pursue the vehicle because "the information they had at the time did not indicate it was a kidnapping."

Around 4:45 a.m., the Durham County Sheriff's Office called back and advised that it was a potential kidnapping case and that the victim was in the car with the suspect.

The last known location of the car was 4044 Capital Boulevard.

Sgt. R.L. Warner and two other officers arrived at that address and found the vehicle.

When officers attempted to stop it, the driver again took off toward I-440.

At that point, Sgt. Warner initiated a pursuit, according to the report.

The pursuit continued onto I-440 and then to US-64/I-87, with multiple agencies joining in.

The North Carolina State Highway Patrol eventually deployed a tire deflation device just prior to exit 436 on I-87, which slowed the vehicle down.

According to the report, when the vehicle came to a stop, the suspect -- later identified as 23-year-old Hugo Yaret Cortes-Ramirez -- ran from the vehicle, toward the woods with a pistol in his hands.

Police say that as he was running, he fired multiple shots toward responding officers, including Sgt. Warner who returned fire.

Cortes-Ramirez went into the woods and moments later, Sgt. Warner heard a gunshot, the report says.

Officers rescued the kidnapping victim from the car while additional officers arrived.

After the scene was secure, they began searching for Cortes-Ramirez, who they found dead in the woods with his pistol in his right hand, according to the report.

Sgt. Warner was wearing a body camera but the report states that when he attempted to activate it during the pursuit, he realized the battery was dead.

However, according to the Raleigh Police Department, the incident was captured on multiple other dash and body cameras.