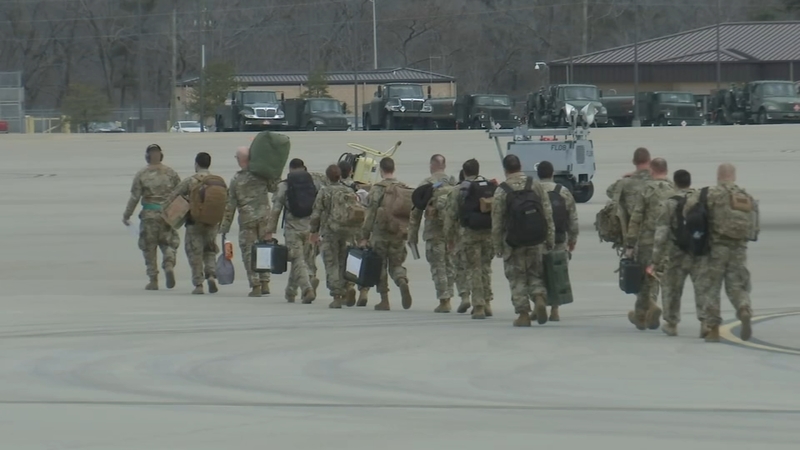 FORT BRAGG, N.C. (WTVD) -- Less than 24 hours after getting their orders from President Joe Biden, the first wave of U.S. troops deploying to Eastern Europe took off aboard C-17s from Pope Army Airfield at Fort Bragg on Thursday afternoon.

In all, 2,000 soldiers and paratroopers from XVIII Airborne Corps and the 82nd Airborne Div. will deploy to Germany and Poland.

"It was not news to them when the announcement was made because we're always prepared for this situation," said Capt. Matthew Visser, XVIII Airborne Corps Spokesperson.

John Kirby, Pentagon Press Secretary, pointed to the force's versatility and readiness as the reason they were being ordered to lead the way on the mission to bolster NATO allies and deter Russian aggression as Russian President Vladimir Putin has refused to pull back troops from its border with Ukraine.

Before boarding the C-17 that would take him to Germany, Lt. Col. Brad Jordan said he and his comrades had a general concept of what they would do once they touch down, but they're used to heading into the unknown.

Load ‘em up and move ‘em out. Soldiers from Fort Bragg board C-17’s headed for Eastern Europe on orders to bolster NATO allies and deter Russian aggression along the Ukrainian border. @ABC11_WTVD pic.twitter.com/iEZv6heyFP

"You plan for what you can plan for and then you just adapt to whatever else just happens to come along and that's largely what the 82nd does," he said. "That's the life of a paratrooper."

Soldiers arriving at Green Ramp received one final briefing from their leadership before heading out to the tarmac.

As they deploy to Europe, Fort Bragg troops say they are ready for whatever lies ahead.

The troops do not know how long they will be serving in Europe; the Pentagon has only stated publicly that the deployment will be temporary and American troops will not be fighting in Ukraine.

For 1st Lt. David Reed, 25 of Fairfax, VA, this first deployment is already a memorable one.

"It means a lot," he said. "My grandfather was in the 82nd and my dad was at Bragg for a little while."

Reed said his father was watching Kirby's announcement from the Pentagon on Wednesday and gave him a call.