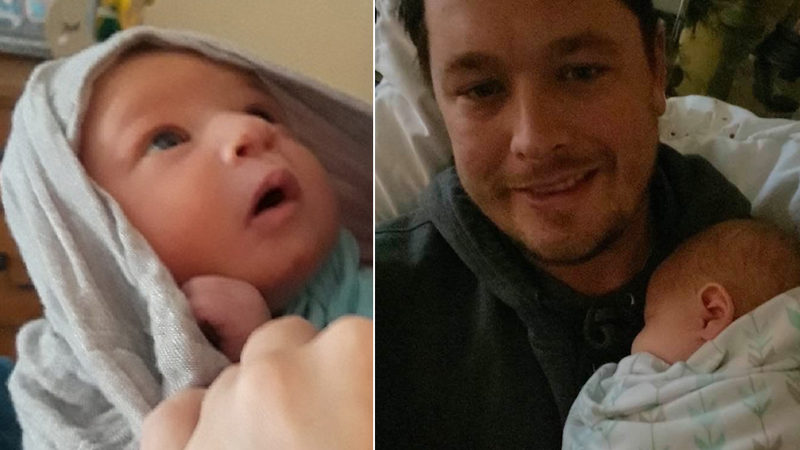 AUSTIN, Texas -- The baby girl who was found inside a home in northwest Harris County last week is home for Christmas.

Baby Margot Carey was reunited with her father and his family in Austin Monday night, according to Child Protective Services.

CPS said the state is no longer seeking temporary custody of Margot. The baby is the daughter of Heidi Broussard, who was found dead inside of a trunk, while the child was found alive inside of the home on Bo Jack Drive in northwest Harris County last week.

"They have confirmed it's her," said Ty Carey, the baby's paternal grandfather at a vigil for Broussard held Monday night in Austin. "She's coming home tonight, and that's the best thing that can ever happen."

Ty is the father of Shane Carey, Broussard's fiancé. The couple had been together for years and had Margot and a 6-year-old son together.

This is the first photo Shane Carey, the dad of the baby found alive inside a Houston-area home, has posted with his daughter since being reunited last night in Austin. Carey's fiancee, Heidi Broussard, was found dead. Her friend is charged in the case. https://t.co/8gQxGEPn1R pic.twitter.com/xJHLgrDYl1

READ MORE: Mother of murdered Austin mom on suspected killer: 'I was uneasy with her

It was the first time anyone from Shane's side has spoken publicly since the gruesome discovery last Thursday. He had been under intense scrutiny while dealing with this great loss.


"You know how much he loved her," said Ty Carey. "It's just unbelievable, but it's over now, and everybody saw. There were so many people saying so much terrible things."

"We're a very tight family, full of love and we just want to kind of, you know, try to get that going again," Ty Carey continued. "I never thought anything like this would ever happen. And there's no way that you can ever prep for it. It just keeps coming at you."

"Heidi was infectious. She was a free spirit. She didn't want to be put in a cage. She was fun....we laughed a lot. She understood. She would have done anything for anybody," said Cari Laughlin, a friend of Broussard's.

Last week, Broussard's childhood friend, Magen Fieramusca, was charged with kidnapping and tampering in the case.

Fieramusca, who remains in the Travis County jail, has at least two baby registries indicating a Dec. 1 due date and her past attorney, who represented Fieramusca in a 2018 theft case, said she appeared very pregnant early last month. Investigators believe she kidnapped the mother and child because she wanted a baby.

"I want the two children to know how wonderful their mother was. I want the person responsible to pay for what they've done. For taking someone so beautiful away from so many people that loved her. Especially her children," Laughlin said.

Fieramusca has not been charged with the death, but authorities have said more charges are coming.