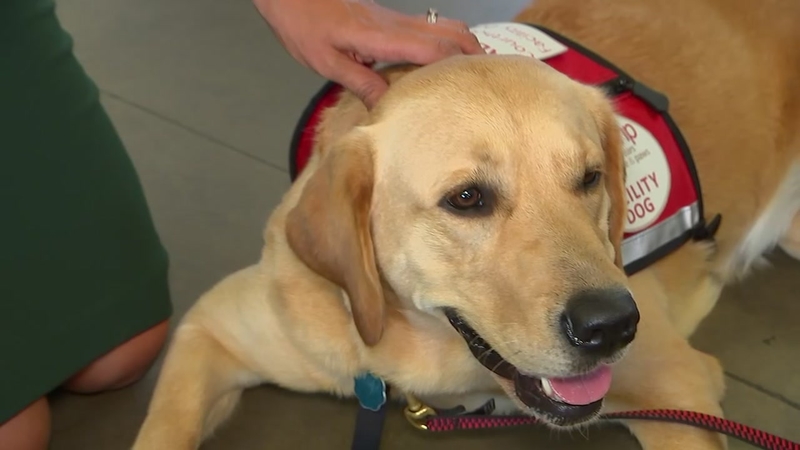 Nearly a dozen dogs were released from prison Tuesday after serving time for a good cause.

The new service dogs were trained by inmates at Caswell Correctional Center. They were celebrated during a ceremony.

"In prison, we're taught to not touch, to not feel emotion, to not show emotion," said inmate Ray Hendrix. "And with the dogs, you can't help but fall in love with them."

"At Both Ends of the Leash" is a partnership between the North Carolina Department of Public Safety and the Carrboro-based nonprofit Eyes, Ears, Nose and Paws.

The inmates live with the dogs and train them in mobility assistance and medical alert. Most dogs get about 18 months of training and then, they're ready to go serve others.

Such as Thomas Loftis, 30, of Greensboro, who suffers from seizures.

"I'm looking forward to the peace of mind, knowing that a dog will be able to tell me, 'Your child is going to have a seizure,'" said his mother, DJ.

Most inmates say they get more out of the program, feeling they're making a difference in someone's life.

"Being in prison makes you feel sort of cast away from society, forgotten unwanted," Hendrix said. "This really helps us."

Hendrix is in prison for second-degree murder and first-degree kidnapping.

Jeremy Dunlap is serving life in prison for first-degree murder.

"One thing about coming to prison is you failed," Dunlap said. "Honestly, you failed, but this teaches that you're not just in prison, but you can make a difference even where you are."

Dunlap said the program is a way for him to give back to others.

"It's helped me to have new challenge in life and to give me a renewed sense of purpose and above all, to be able to pay back something," Dunlap said, adding there aren't many ways to pay back for the things you've done.

Hendrix trained Adele for six weeks. She'll now move on to become a service dog at the Orange County Courthouse.

"I got really attached to Adele," Hendrix said, adding that he'll miss her. "I'd love to keep her and take her home with me one day, but she's going to go on to serve a much greater purpose. She's going to do great things."