A total of 39 protesters were arrested on Friday.

RALEIGH, North Carolina (WTVD) -- Two of the most controversial bills in a surprise special session in the North Carolina General Assembly have been passed.

Both bills have been heavily condemned by state Democrats who are accusing the Republican super-majority of a "coup."

Senate Bill 4 dramatically reshapes the governor's power in election oversight. Previously, the governor appointed a majority of state election board officials on the five-person panel. SB4 expands the board to eight members. The governor now appoints four and Republicans select the other four. Republicans call it bipartisan good governance. Democrats call it a power grab.

"This legislation lays important groundwork to ensure a fair and ethical election process in North Carolina," McCrory said in a statement Friday evening.

He has also appointed Yolanda Stith to the NC Industrial Commission.

"I want to thank the General Assembly for confirming my appointment of Yolanda Stith to the North Carolina Industrial Commission. Not only does she bring diversity to the commission, but her experience as a business owner and executive will be valuable as she takes on this new responsibility," McCrory said.

House Bill 17 sharply reduces the number of appointees to state government Governor-elect Roy Cooper can make, requires all of Cooper's top agency heads to be approved by the Senate, and it strips Cooper of his power to appoint trustees to the boards of UNC System schools.

The three-day long special session is now adjourned and lawmakers are headed back home.

On Twitter, Cooper vowed to fight back in the courts.

Meanwhile, Friday began with more protests and arrests as lawmakers began their debate on the controversial legislation.

Demonstrators filled the viewing gallery of the North Carolina House early in the morning and, for the second day in a row, they were ordered out by police. Arrests were also made in the afternoon in the Senate after police ordered protesters to vacate that chamber's viewing gallery.

At least 39 people were arrested and led away with wrists bound in plastic ties as other protesters chanted "all political power comes from the people."

Hundreds stomped their feet or banged on windows outside the gallery, causing several Republican lawmakers to note they were having trouble hearing during the debate. Democrats repeatedly stated their objections.

"The kindergartners are getting rowdy," said Republican Rep. Dana Bumgardner.

She said Democrats were "creating out of thin air a talking point for the next election."

Republicans maintained the legislation is simply adjusting the constitutional powers already granted to the General Assembly. Many provisions had been debated for years but had either gotten blocked or the Democratic viewpoint previously won out.

"There's probably no better time than to deal with it in the present," Republican Rep. Bert Jones said of the judicial elections provision.

On Wednesday 17 people were arrested and charged with trespassing at the General Assembly. 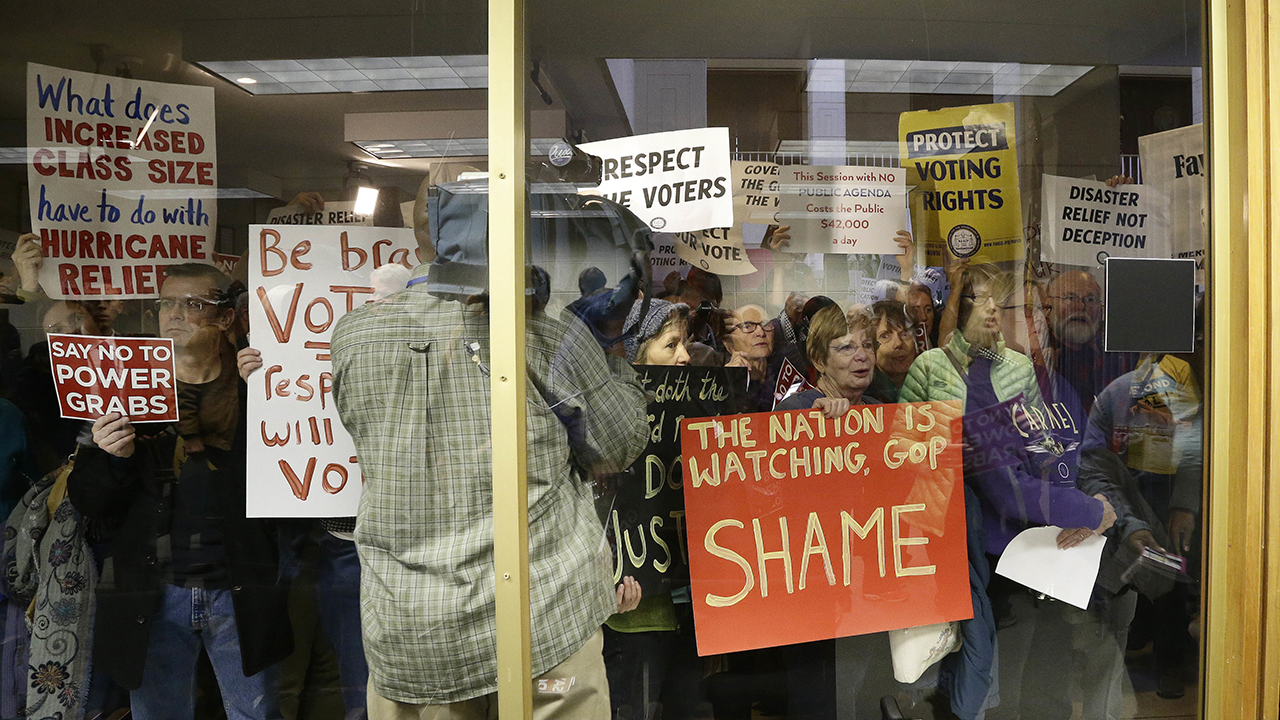 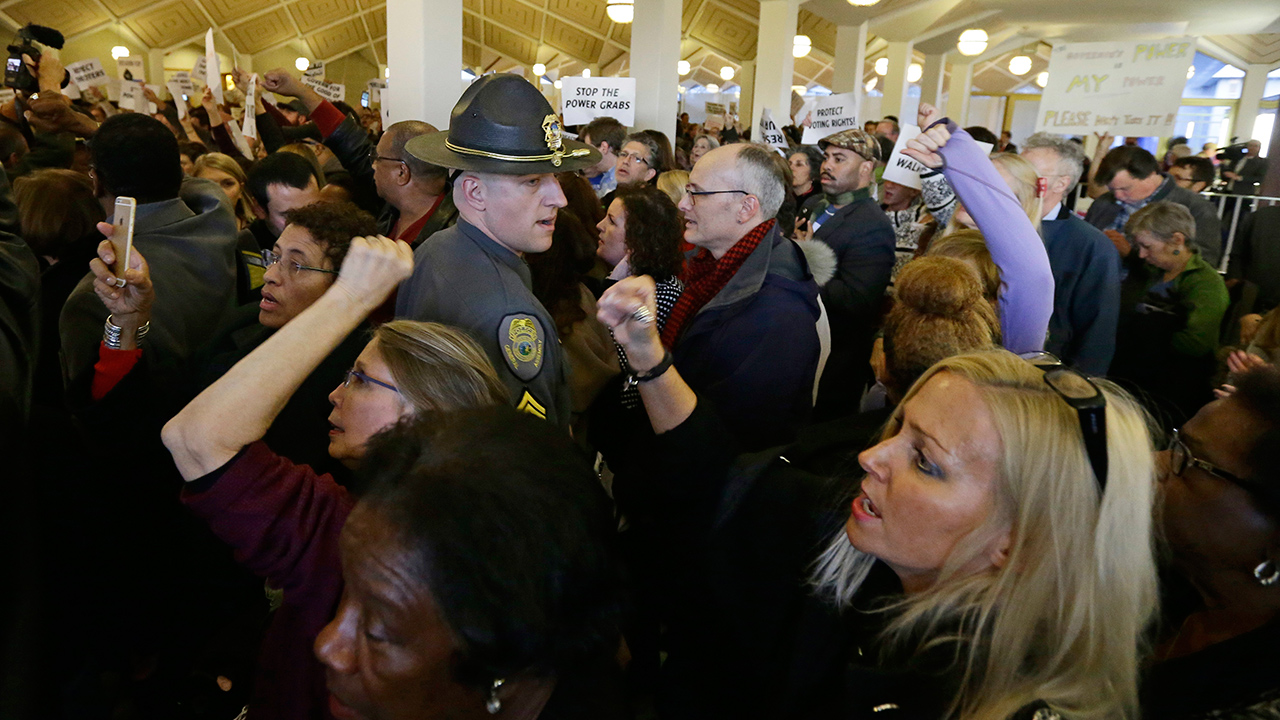 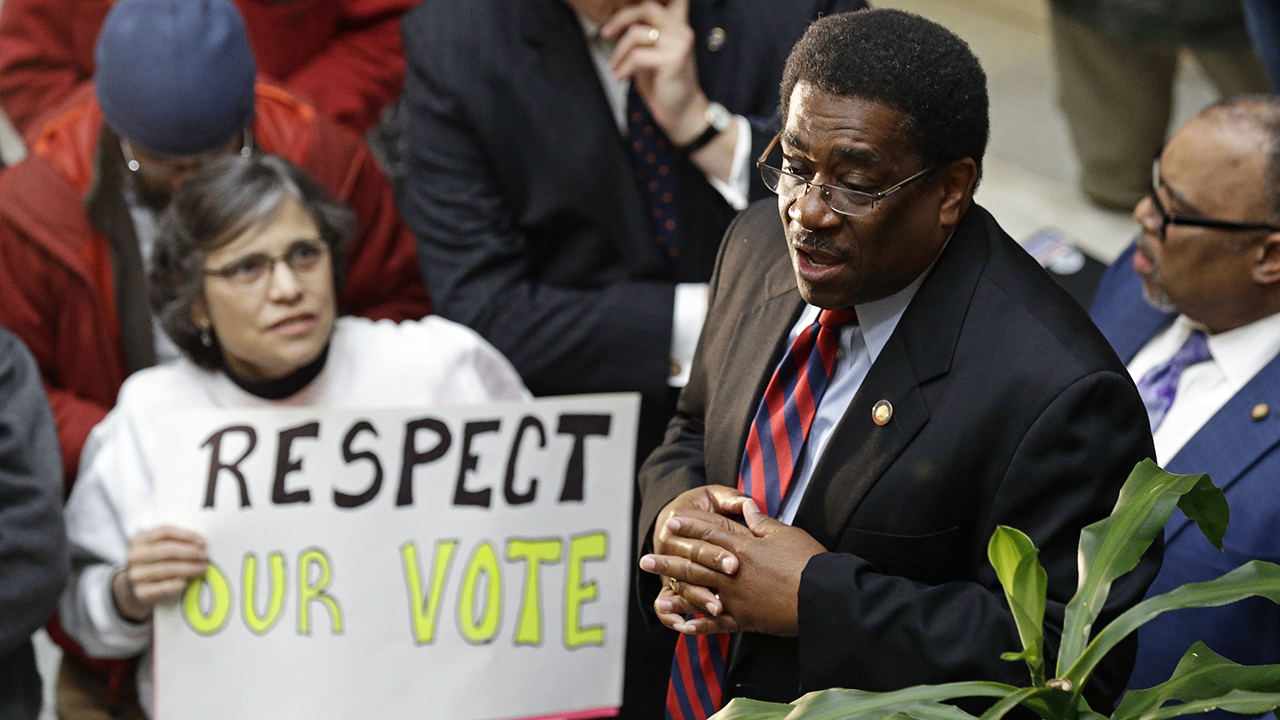 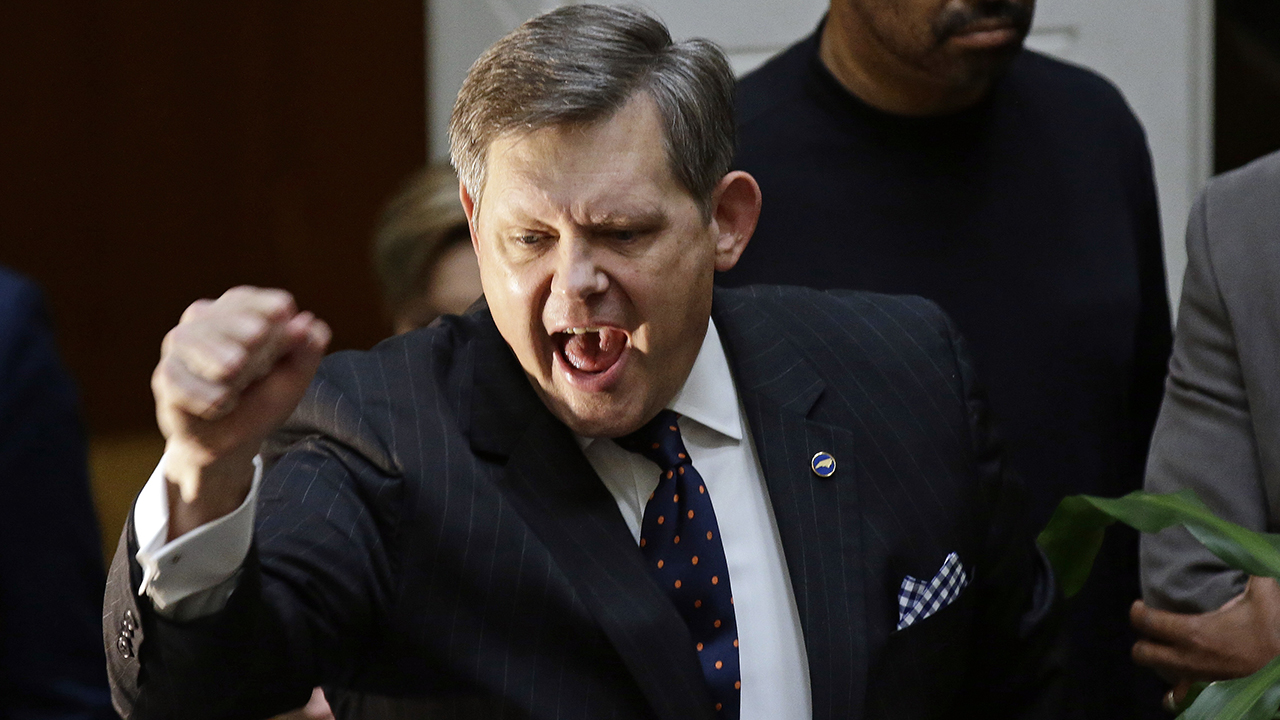 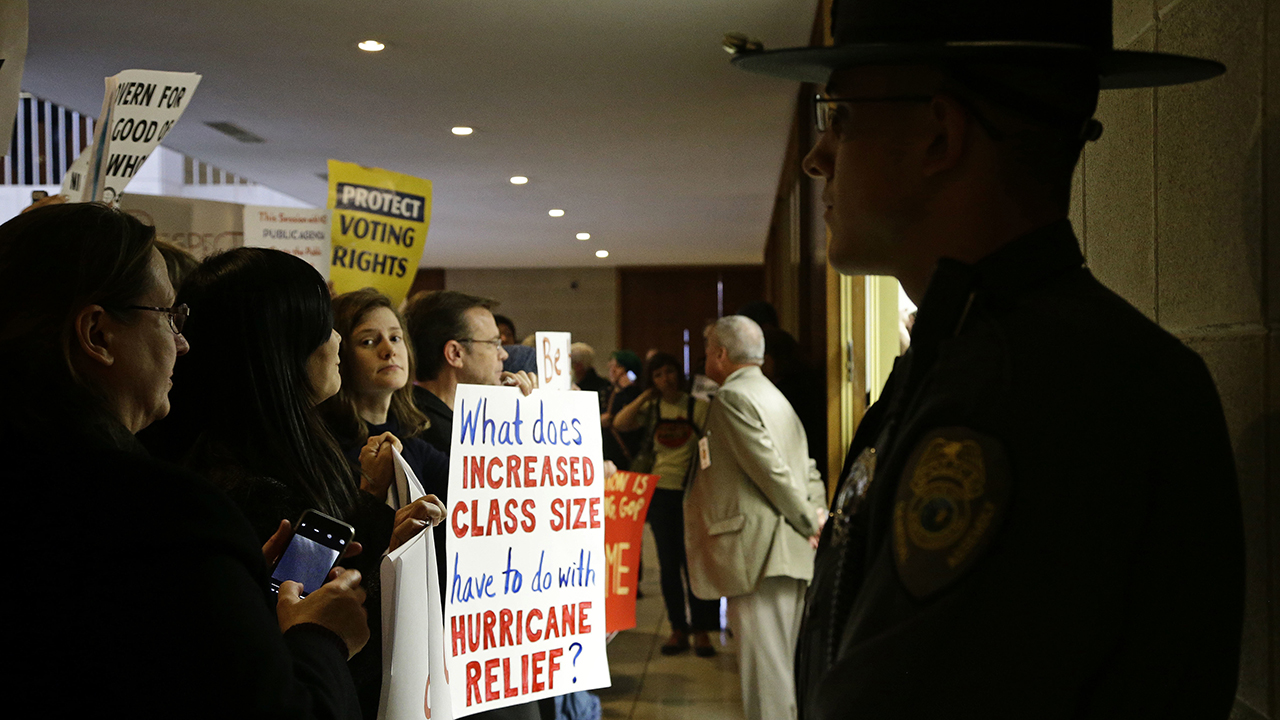 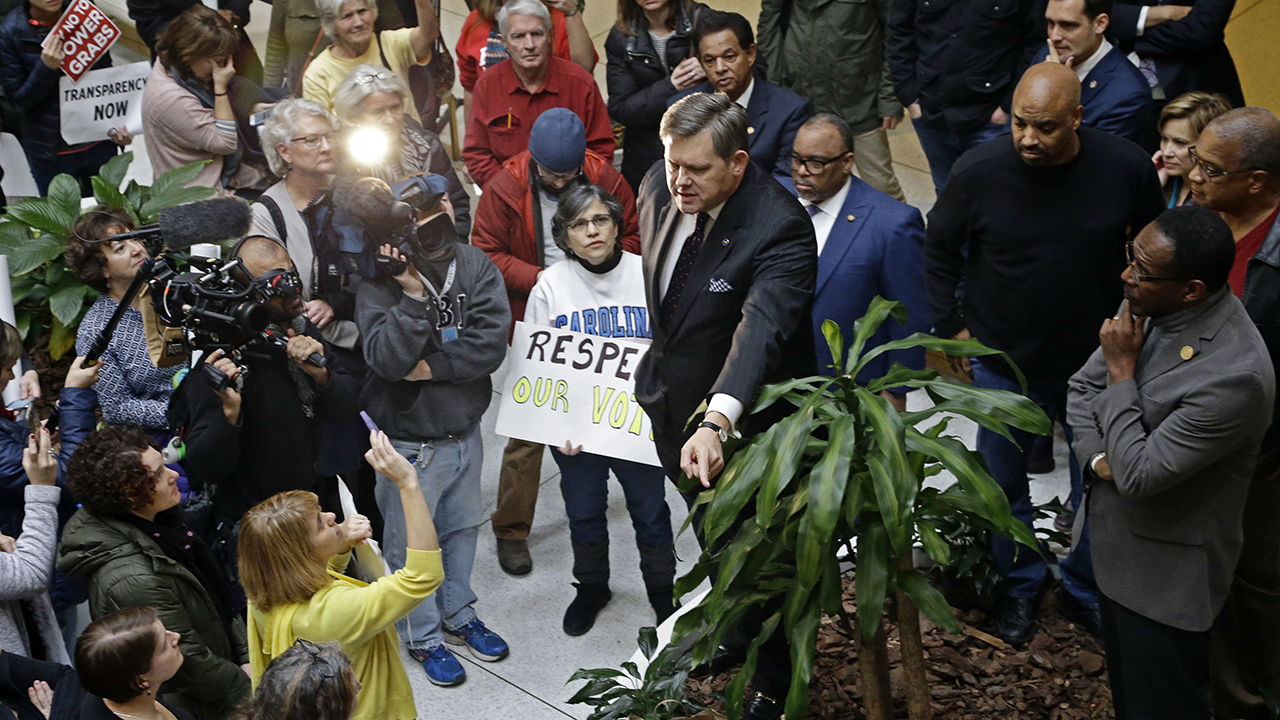 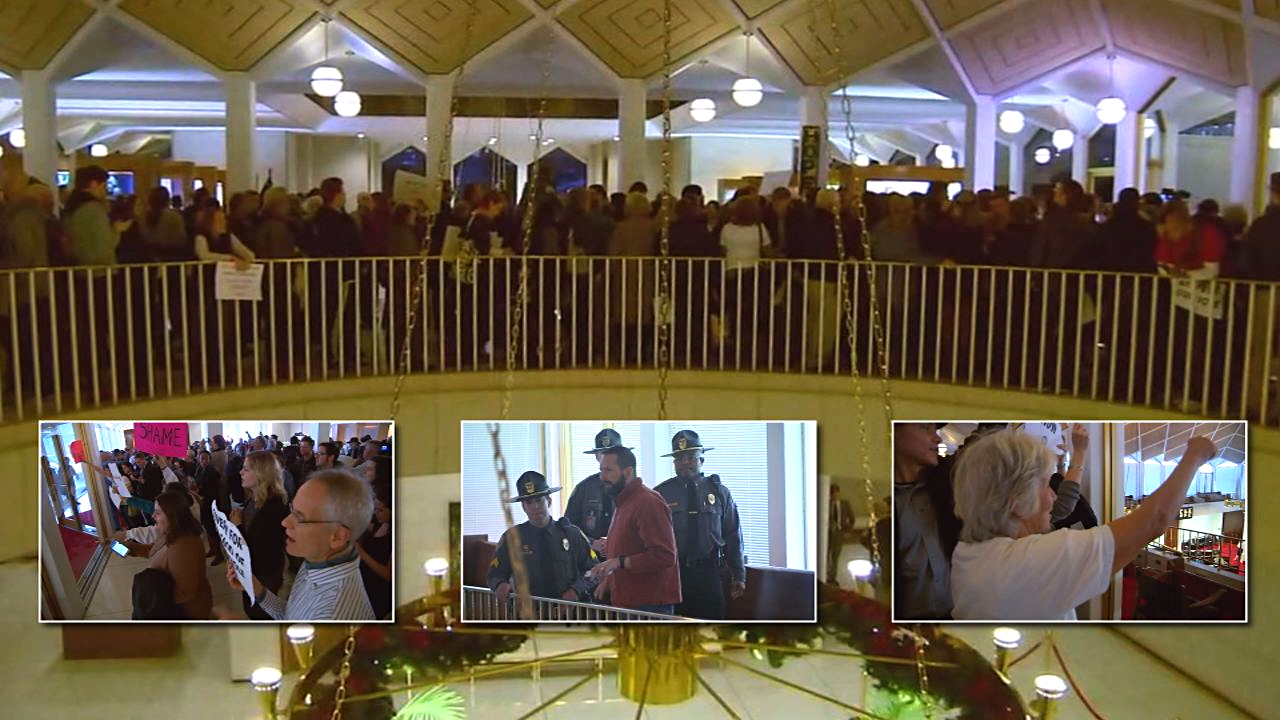 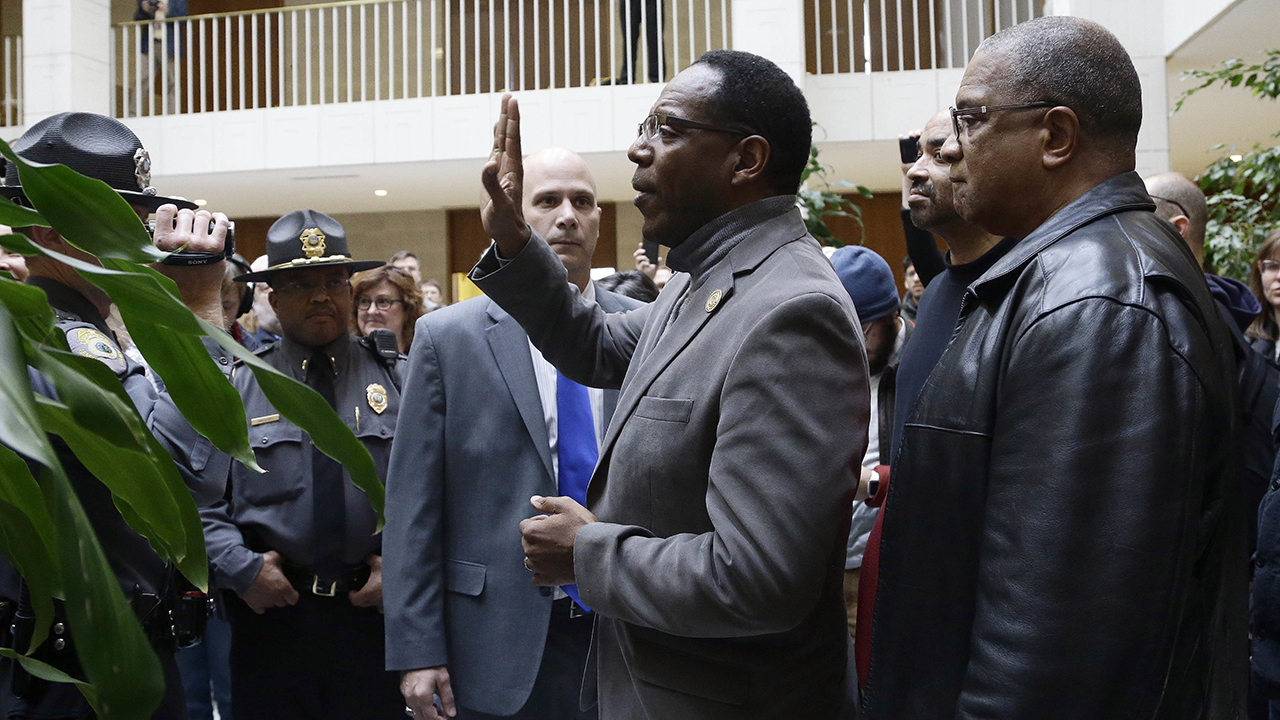 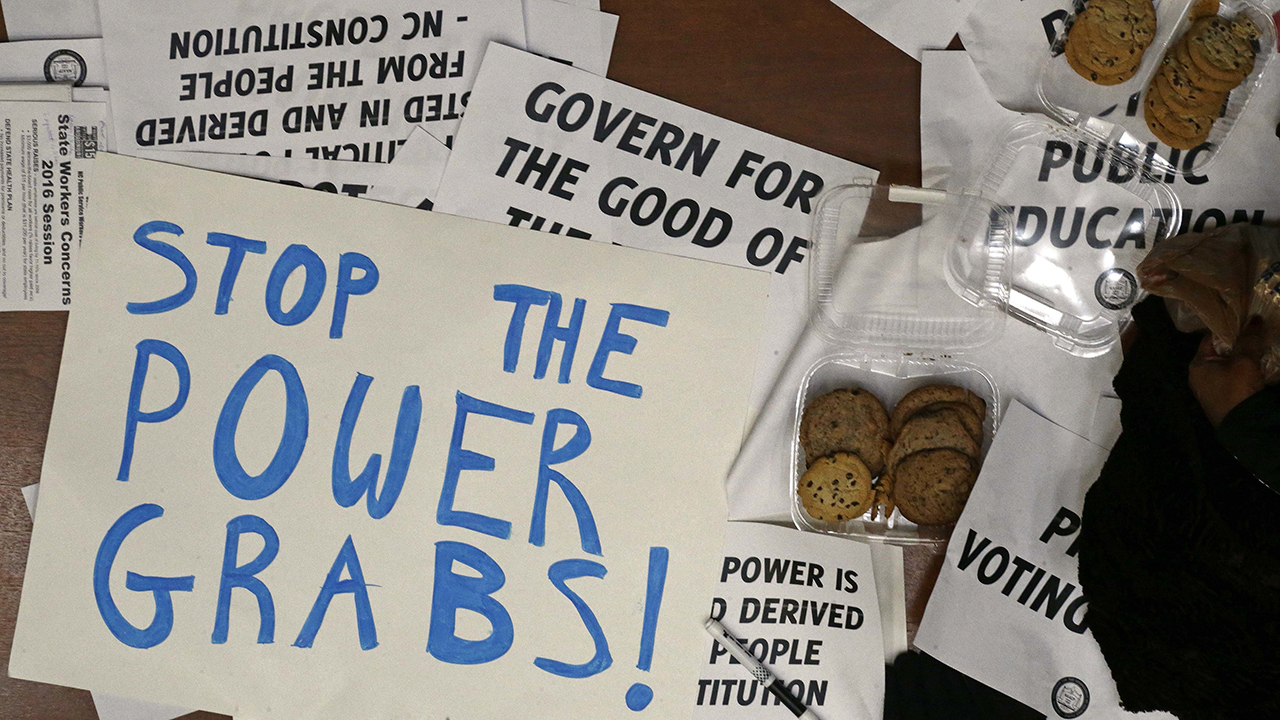 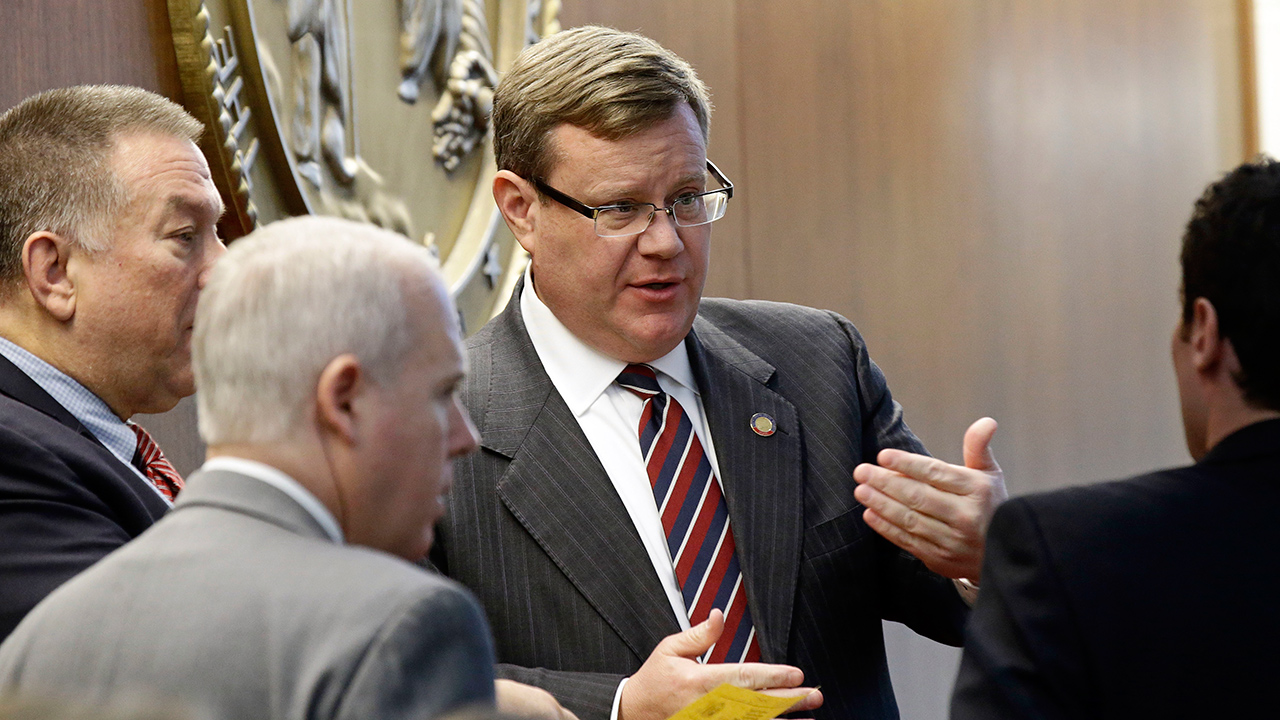 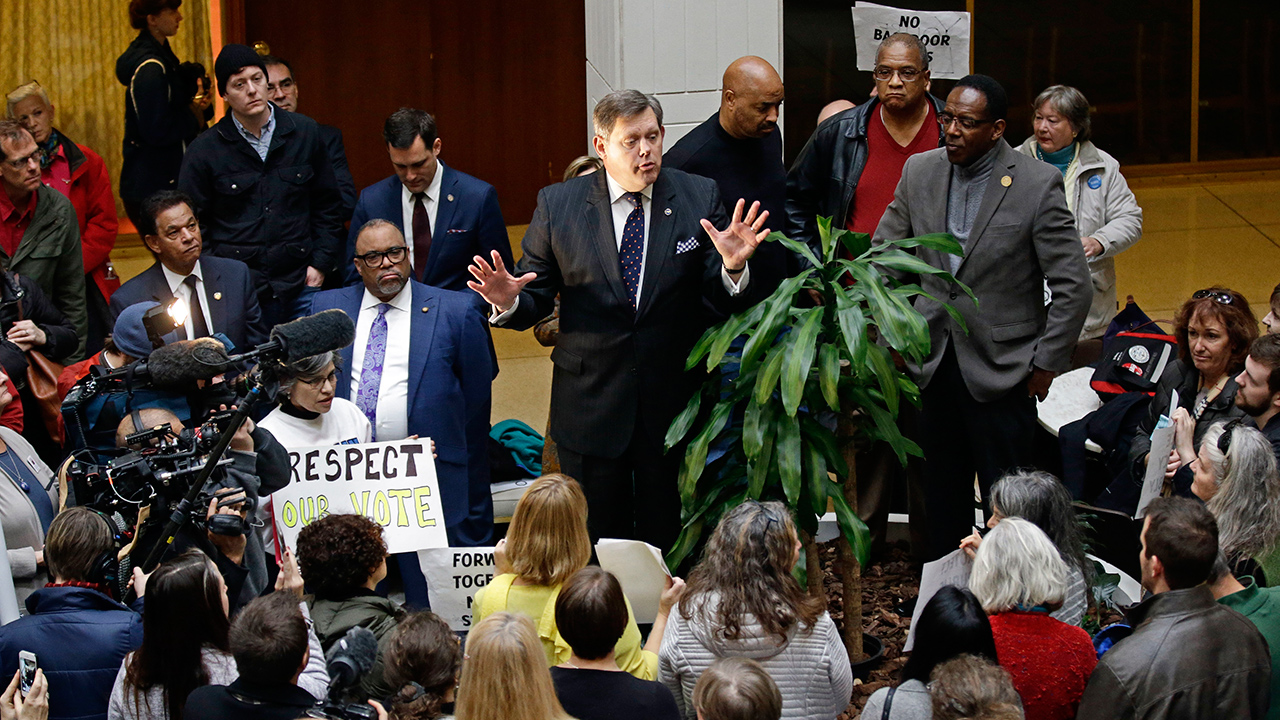 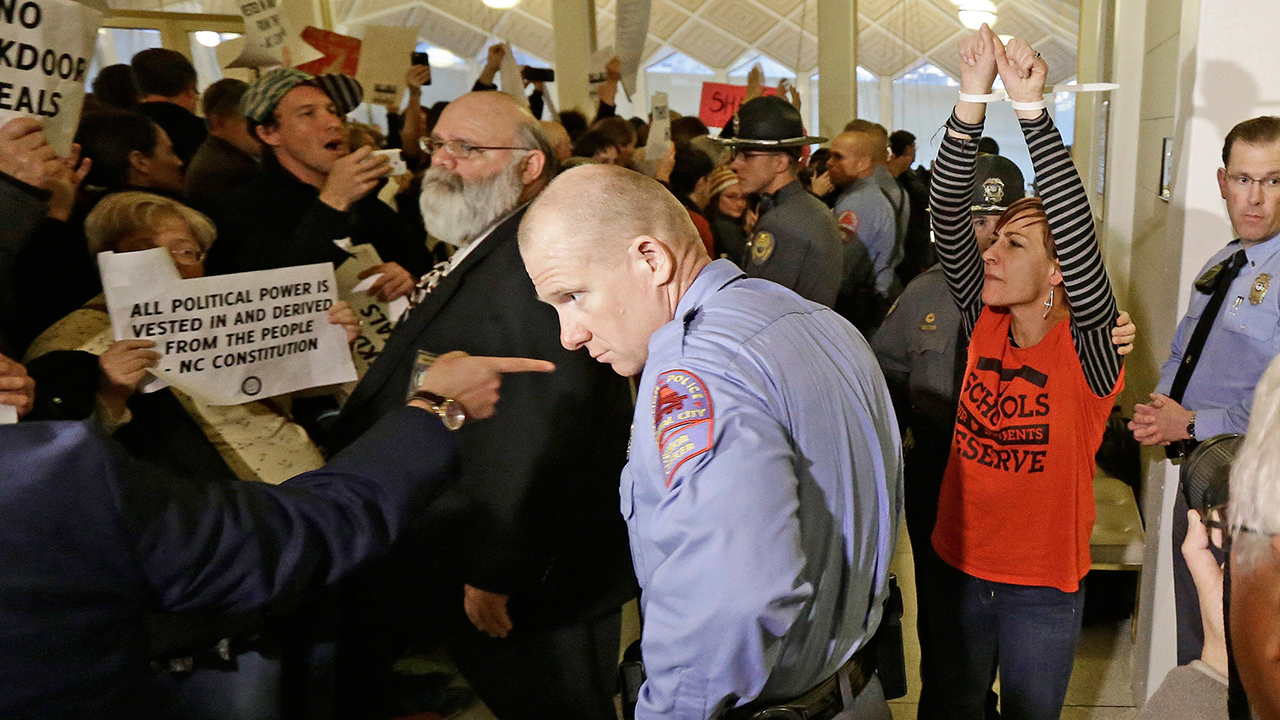 Republicans gained power of both legislative chambers in 2010 for the first time in more than a century, and they have veto-proof majorities.

Cooper ran on a platform of defeating Republicans' agenda, saying he would work to repeal a law known as House Bill 2 that limits LGBT rights.

"If I believe that laws passed by the legislature hurt working families and are unconstitutional, they will see me in court," Cooper said.

Republicans pointed to past sessions of the General Assembly when it was dominated by Democrats. Democrats stripped the powers of the first and only GOP lieutenant governor of the 20th Century in the late 1980s. But Democrats said there's been no such widespread effort to limit the power of an incoming executive before he took office.

"After losing the Governor's race, Republicans in the North Carolina legislature are executing an unprecedented partisan power grab during the lame duck session to spite the next governor of the state. After the North Carolina Republican Party engaged in shameful voter suppression and still lost the governor's race anyway, they're now attempting to circumvent the will of the voters," Brazile said in a statement.

"These are the same tactics that led to HB2 - which cost North Carolina's economy thousands of jobs and hundreds of millions of dollars. This power grab will further undermine the people's faith in North Carolina state government," she added. "On behalf of the Democratic Party, I condemn this unprecedented power grab. I call on North Carolina Republicans to respect the will of the voters, and on Governor McCrory to veto the remaining bills."