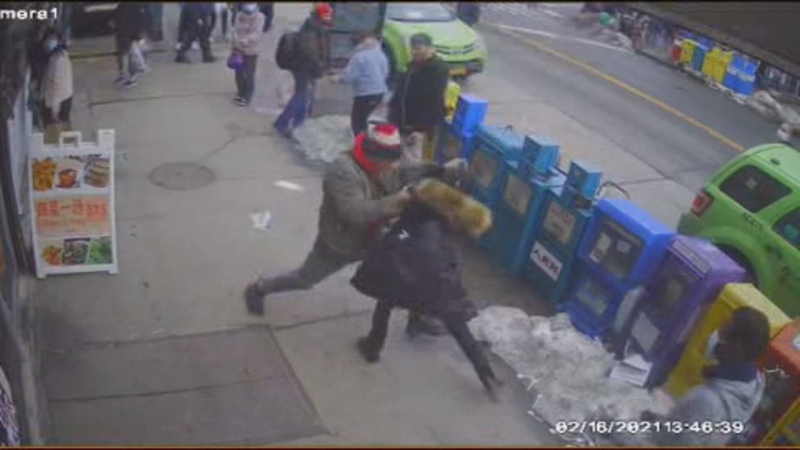 Celebs call for change amid unprovoked attacks on Asian-Americans

SAN FRANCISCO -- Social justice advocates and celebrities like Olivia Munn are calling for change after a string of violent attacks against Asians and Asian Americans have been reported in San Francisco, Oakland, New York and across the U.S.

"Throughout the pandemic advocates say that all of the massive fear and anxiety brought on by COVID-19 has been weaponized against the Asian-American community," said Chang. "This recent spate of incidents has so many people united, saying stop the violence."

String of violent attacks against Asians and Asian Americans have left many across the country on edge. Advocates and celebrities like @oliviamunn are calling for change amid spike in hate crimes. @JujuChangABC reports. https://t.co/PJDI8SYB4m pic.twitter.com/6W8hWdfhKJ

In New York, police are investigating an attack on an Asian-American woman outside a bakery in Queens.

The startling assault was caught on surveillance video.

Many in the Asian American and Pacific Islander (AAPI) community believe the attacks are motivated by hate, but the NYPD says it is not currently investigating the latest case as a hate crime.

Hollywood A-listers are bringing attention to the alarming problem.

Actress Olivia Munn says she has a personal connection to the assault in New York.

"My friend's mom is a 5'3" 50+ Chinese woman and she was attacked," Munn posted on Instagram. "She left the hospital with 10 stitches in her head. These racist hate crimes against our elders have got to stop. We're gonna find this guy."

"Crazy Rich Asians" actress Awkwafina is also speaking out, saying "don't want to wake up to more of this."

"Hawaii Five-O" star Daniel Dae Kim helped spark the campaign against hate after a series of attacks against elderly Asian-Americans in the San Francisco Bay Area.

"These are people that are elderly, often with pre-existing conditions, who are already afraid to go outside and now they're fearing for their lives," said Kim.

A generation of young activists, like William Lex Ham, are also taking on the mantle of racial equity.

"We're seeing a rise of so many Asian Americans who are just sick and tired of being invisible, being ignored and they're utilizing their platforms, their circles of influence to demand to be seen," said Ham.

"They're utilizing their relationships with Black community leaders, and a lot of the solidarity work that has been happening here to condemn the violence, to condemn the anti-Asian hate crimes," said Ham.