Current absentee ballot deadline in NC could result in votes not getting counted, US Postal Service warns 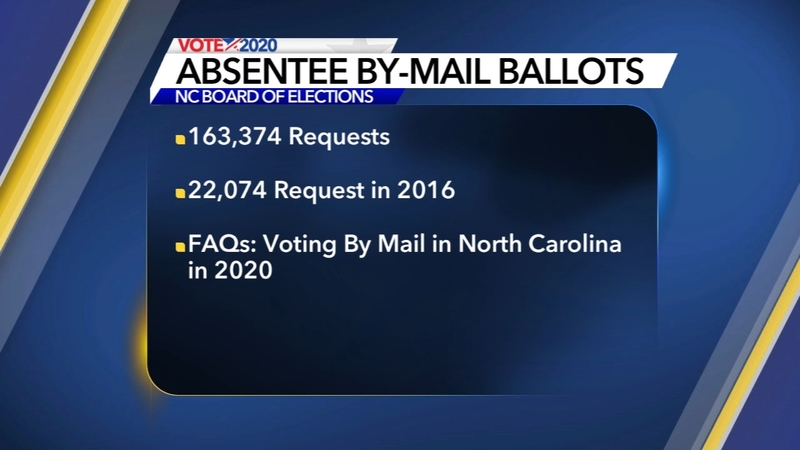 RALEIGH, N.C. (WTVD) -- In a letter to the North Carolina Secretary of State, USPS is requesting more time to make sure ballots are submitted for the general election.

In the letter, sent by USPS Executive Vice President Thomas Marshall, he wrote that "voters should submit their ballot request early enough so that it is received by their election officials at least 15 days before Election Day at a minimum, and preferably long before that time."

He further stated that "certain state-law requirements and deadlines appear to be incompatible with the Postal Service's delivery standards and the recommended time frame noted above," later specifically mentioning a voter's ability to request a ballot as late as a week before the election, and for a ballot to be postmarked by Election Day and received by election officials no later than 3 days after the election.

North Carolina's current deadline for requesting an absentee ballot is 5 p.m. Oct. 27. That is just seven days before the Nov. 3 election.

"I think it's going to cause people who want to vote through the absentee ballot system to do their (voting) much earlier. Whether it turns out to be a problem with the US Postal system or not, I just think the fear of not having your vote count is going to cause people to make decisions earlier than they otherwise would," said Meredith College political science professor David McLennan.
Everything you need to know about absentee voting in North Carolina

The USPS said it suggests all states allow at least 15 days for citizens to receive and send a ballot by mail.
USPS said in the letter that it believes North Carolina's ballot deadline "creates a risk that ballots requested near the deadline under state law will not be returned by mail in time to be counted."

In a statement from the Postal Service on Friday, a spokesperson characterized these letters as part of "continuing educational efforts" with election leaders intended to "assist states in educating their voters on when to request their ballots and to return their completed ballots in accordance with the Postal Service's mailing standards."

Because of "increases in volume ... in the primary elections," the agency felt it necessary to reach out to state election leaders "to ensure the Postal Service's recommendations were reemphasized to elections officials."

The letters were not intended to "offer advice on whether state law should be altered," the spokesperson noted.

"Donald Trump's assault on the US Postal Service is an attempt to rig this election - plain and simple. Congress should work to make sure the Postal Service has the funding to operate at full capacity in the coming months to make sure every vote is counted. We have confidence in the NC Board of Elections and encourage all North Carolinians to cast their vote in the safest and most convenient way for them - whether that's voting by absentee ballot, voting early or on Election Day. Those planning to vote absentee should know that they can drop their ballots off in-person at early voting sites or their local Election Board office as well."

Absentee ballots will be sent out to those who requested them beginning Sept. 4.

Through Aug. 9, North Carolina voters had submitted 163,374 requests for absentee by-mail ballots for the 2020 general election, more than seven times as many as the 22,074 requests submitted at the same time in 2016.

"We have never had an election like this in a pandemic before," said NC State political science professor Steven Greene.

The spike in absentee ballot requests has also come as third-party groups have sent out mailers to voters, encouraging them to submit their forms. However, since the recipients often did not request the mailer, there is potential for confusion.

Confusing absentee ballot requests showing up in your mailbox? Here's what you need to know

"You don't want to be confused with some other piece of mail that's just an advertisement or some other propaganda, that you really want to know that this is your official absentee ballot request. That you are sending it back to the right place. This is very important because there are a lot of people that have serious health concerns about actually voting in the polls this year," said Greene.

"These third-party groups are being very selective in terms of how they're getting their ballots out. They're getting obviously the people they think will support their agenda," added McLennan.

While these request forms sent by third-parties are legal, some people still have concerns about making sure they end up at the appropriate office.

"It is the best approach on your own to get one of those official forms and make your official request to the county or state board of elections," said Greene.

Adding to the confusion is President Trump's position on using the mail to send ballots. While the president has defended absentee ballots, he has sharply criticized mail-in ballots, alleging they can lead to fraud.

"The North Carolina Republican Party is actively encouraging voters to utilize North Carolina's absentee voting process. We want our voters to know they can utilize this tool to cast their ballot in an easy, safe and secure manner. We think it is important to note that the North Carolina system requires a voter to actively solicit a ballot and go through an easy but important process to request a ballot. We don't want to confuse North Carolina's absentee system with other states' all-mail elections. We along with President Trump oppose an all-mail election process where voters are mailed ballots without a prior request and authentication."
Report a correction or typo
Related topics:
politicsraleighncvoter informationvote 20202020 presidential electionelectionusps
Copyright © 2021 WTVD-TV. All Rights Reserved.
TOP STORIES
Is $1M incentive upping COVID vaccinations? It's too early to tell
2 Bragg paratroopers found dead in barracks over the weekend
Tropical depression forms off NC coast
First Alert to Hurricane Season: Virtual Roundtable
Durham company's lung imaging could help long-haul COVID patients
Girl, 15, killed by lightning strike at beach while swimming on vacation
Teen gets associate's degree, IT certificate before HS graduation
Show More
'DEFUND' to be removed from in front of Durham police headquarters
4 mass shootings in 6 hours leave 38 wounded, 6 dead
Biden reaffirms US 'sacred' commitment to NATO
Another member of prominent South Carolina legal family dies
IRS says it's working 'as fast as possible' after tax refund delays
More TOP STORIES News