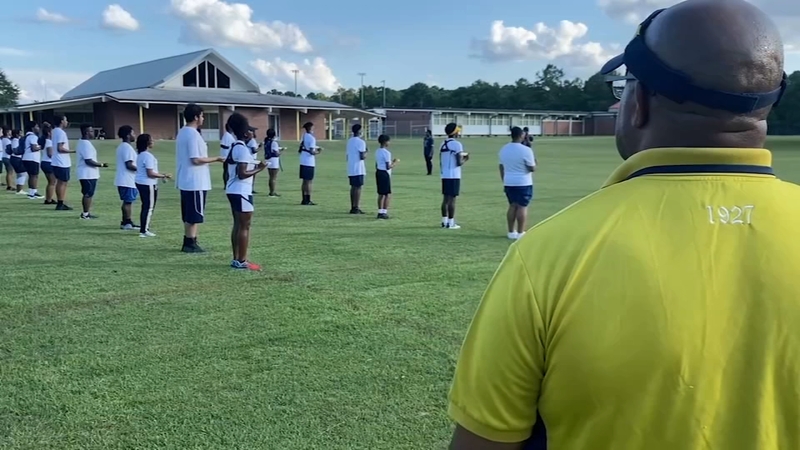 Depending on the summer day, the sights and sounds of the Magnificent Marching Machine can be seen and heard echoing throughout the neighborhood.

"It is what this whole community takes pride in; the parades, competitions, entering stadiums," said band director, Roosevelt Pratt, who has led the legacy for the past 25 years.

The Fayetteville native developed his passion and purpose within the walls of E. E. Smith High School -- where he is a proud graduate of. The former band student returning to teach in the very classroom he learned to be a musician in. He worked under Mr. Paul Russell, who trained him until his death.

"He just knew that through music he could reach students," said Pratt.

Hundreds of trophies line the shelves inside the band hall where students spend hours perfecting their skills. The Marching Machine is a pioneer of sorts in the Fayetteville high school band community.

"When we'd go into their communities, we'd steal their crowd," said Pratt. "Big conversation on Monday night of, why can't we be like E. E. Smith?"

He has cultivated a love for the marching band in hundreds of students, which gave them the foundation to take their talents to HBCU's. To date, 25 of his former students earned the coveted title of drum major including Winston Salem State University student Brandeen Sonkesack.

"It was one of my greatest accomplishments I'd say. I worked really hard to get drum major. The best thing I got from this program was the leadership drilled in me as a high school student," said Sonkesack.

"Mr. Pratt would always say to treat this like you're performing at a collegiate level. Since then, that was ingrained in us. We retained that," said Gaddy.

Not only has the Magnificent Marching Machine formed lifelong friendships and student leaders, but its also drawn many love connections too. Pratt met his wife Connie of 29 years here. Together, they have two daughters.

The rich legacy of this award-winning band program lives on through Pratt, the students and the community that loves it so much.