Go big or go bipartisan? Biden wants both in next round of COVID stimulus 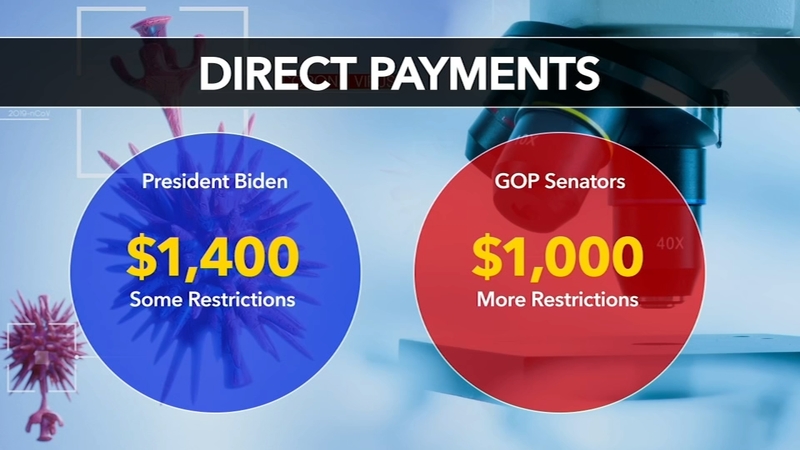 Go big or go bipartisan? Biden wants both in next round of COVID stimulus

WASHINGTON, D.C. (WTVD) -- President Joe Biden's top legislative priority is to infuse nearly $2 trillion into the U.S. economy and fight the COVID pandemic, and he thinks Republicans will want to support that initiative for the sake of the American people.

"The risk is not that it would be too big," White House Press Secretary Jen Psaki said Monday. "The risk is that it is too small."

Last week, more than 120 economists and policymakers signed a letter in support of Biden's "American Rescue Plan," saying the $900 billion that Congress approved in December before he took office was "too little and too late to address the enormity of the deteriorating situation."

Biden proposed $1,400 checks for most Americans, which on top of $600 provided in the most recent COVID-19 bill would bring the total to the $2,000 that Biden has called for. It would also extend a temporary boost in unemployment benefits and a moratorium on evictions and foreclosures through September.

Under Biden's multipronged strategy, about $400 billion would go directly to combating the pandemic, while the rest is focused on economic relief and aid to states and localities. About $20 billion would be allocated for a more disciplined focus on vaccination, on top of about $8 billion already approved by Congress. Biden has called for setting up mass vaccination centers and sending mobile units to hard-to-reach areas.

The plan also provides $50 billion to expand testing, which is seen as key to reopening most schools by the end of the new administration's first 100 days. About $130 billion would be allocated to help schools reopen without risking further contagion.

"I do think everyone wants to keep their communities healthy," Rep. Kathy Manning, D-NC, told ABC11. "I think everyone is saying infection rates go up, hospitals overloaded, and uneven distribution of vaccinations. That means getting money to states and municipalities to ensure proper delivery of the vaccinations. Making sure we have health care workers and others who are trained to give vaccinations. We got to have that funding."

Republicans, meanwhile, generally agree on where funding needs to be but not how much.

Ten Republican senators, including Thom Tillis of North Carolina, on Sunday, proposed spending about one-third of what President Joe Biden is seeking in coronavirus aid and urged him to negotiate rather than try to ram through his $1.9 trillion package solely on Democratic votes.

In challenging Biden to fulfill his pledge of unity, the group said in a letter that their counterproposal will include $160 billion for vaccines, testing, treatment and personal protective equipment and will call for more targeted relief than Biden's plan to issue $1,400 stimulus checks for most Americans.

"In the spirit of bipartisanship and unity, we have developed a COVID-19 relief framework that builds on prior COVID assistance laws, all of which passed with bipartisan support," the Republican senators wrote. "Our proposal reflects many of your stated priorities, and with your support, we believe that this plan could be approved quickly by Congress with bipartisan support."

North Carolina Republicans in the House have said they're also on board with what the Senators are pitching.

"We want it targeted," Rep. Ted Budd, R-NC, told ABC11 in an interview, referring to direct payments. "It's a good use of taxpayer money, it helps grow the economy and we want to open up. We want a great rollout of the vaccines and the local people on the ground have everything they need to take care of those who need it back home."
Report a correction or typo
Related topics:
politicswashington d.c.ncstimulus fundsjoe bidenpoliticsu.s. & world
Copyright © 2021 WTVD-TV. All Rights Reserved.
TOP STORIES
Biden, Putin meet for long-anticipated summit
Rape suspect shot by police chief in Newton Grove: Sheriff's office
NC to collect $6.5B more in tax revenue than expected
Study: Half of US cosmetics contain toxic chemicals
Ebony Anglers compete in 2021 Big Rock Blue Marlin Tournament
LATEST: NC residents eligible to get at-home COVID testing kit
Cary 16-year-old Claire Curzan is living her US Olympic dream
Show More
Teen rescued from chimney after being locked out
3 sunflower fields open to the public this year in Raleigh
EU members agree to lift travel restrictions on US tourists
Raleigh charity giving away 500 fans to beat the heat
Tillis co-sponsors bill to defund schools teaching '1619 Project'
More TOP STORIES News