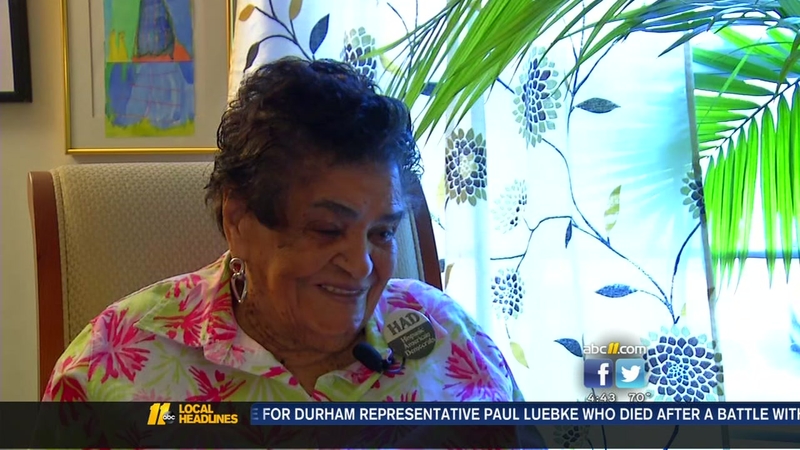 RALEIGH (WTVD) -- 102-year-old Wake County resident Dolores Acosta is voting in another election season -- a right she's been exercising since Franklin Delano Roosevelt was in office.

Unable to afford an education in rural Puerto Rico, Acosta's father immigrated their family to the United States 80 years ago. Dolores worked as a laundry maid at a New York hotel.

While she knows English, the 102 year-old felt more comfortable talking politics in Spanish.

Her experience makes her passionate about her vote, and she shared memories of her favorite president.

"Kennedy, Kennedy, I liked Kennedy," Acosta said in Spanish. "I cried a lot for him. I still remember what happened and it hurts."

Acosta's grandson is in his 60's while her daughter in her 80's. Her daughter says their family is very patriotic.

Edmondson told ABC11 Dolores has a big personality - she tried on a bikini for the first time in her life and took a picture in it to celebrate her 100th birthday.

"She goes to Atlantic City she stays there for two days, gambles all night then comes home in the morning and goes to sleep for about a whole day, and she usually wins," Edmondson said.
Acosta is voting for Hillary Clinton. ABC11 asked what she's looked for in candidates through the years.

"They have to be good themselves so that they will treat everyone else well," she said.

The 102 year-old cast her vote in by mail in ballot to avoid the lines at her early voting place and she is just as eager as ever to see who the next president will be this go around.