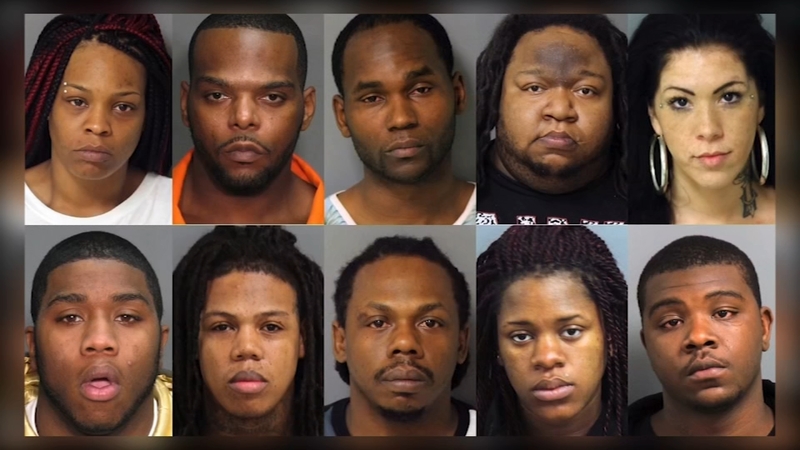 According to court documents, Demetrice R. Devine, 37, of Garner, was the leader of the Gansta Killer Bloods and later created two subsets of the "Bloods" gang -- the Black Mob Gangstas (BMG) and the Donald Gee Family (DGF) organization.

Brandon Jowan Mangum, 31, of Knightdale, was another high-ranking member of BMG and DGF.

The Department of Justice said that Devine, aka "Respect," directed his members to shoot a 16-year-old rival gang member, Adarius Fowler, who later died from a gunshot wound. Devine also ordered the murder of a person who provided information to law enforcement on Fowler's murder.

Mangum, aka "B-Easy," along with other gang members conspired to shoot a rival gang member because he refused to pay money to BMG/DCF, the DOJ said.

Most of the gang activity was centered in Raleigh, particularly in the area around Haywood Street.

"The United States Justice Department and the United States Attorney's Office are aggressively pursuing violent drug traffickers and this case targeted the worst of the worst," said Robert J. Higdon Jr, U.S. Attorney for the Eastern District of North Carolina. "These men pose a serious danger to the people of Eastern North Carolina and with this conviction we have removed this danger from our community. This case is part of our effort to "Take Back North Carolina" from the drug traffickers and violent criminals."

Officials said the gang had ties to leadership in Virginia and New York by sending large amounts of money to.

The money collected through the gang was used to fund firearm purchases, gifts and cellphones for high-ranking members who are in jail.