A year after Hurricane Matthew, many North Carolinians still rebuilding 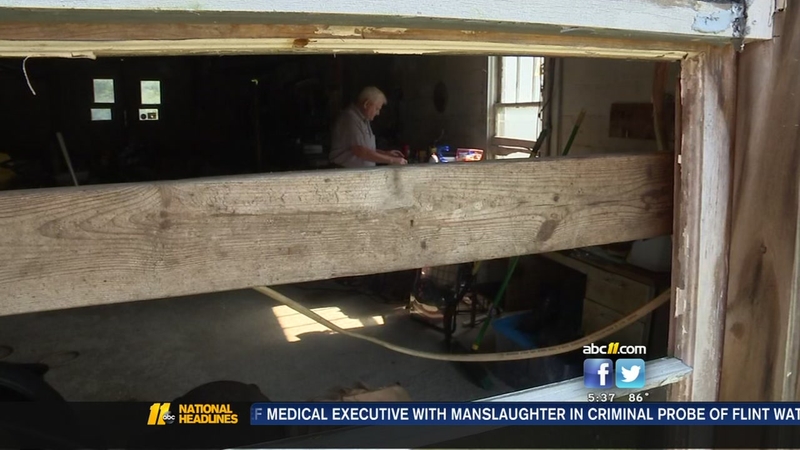 A year after Hurricane Matthew, many still rebuilding

PRINCEVILLE, North Carolina (WTVD) -- One year after Hurricane Matthew, ABC11 is highlighting the long and challenging road to recovery.

Oct. 8th marked one year since the storm struck our state, killing 31 residents.

One of the hardest hit communities, the Town of Princeville, is still working to rebuild.

"I've got to get my lawnmowers going," said Charles Dew, as he showed us his mechanic shop, still unused since Hurricane Matthew flooded it a year ago.

His house, next door to "Dew's Garage," was also inundated by water and is now gutted.

Dew, 71, is living in a small trailer on his property outside of Princeville, after spending seven months in a hotel.

"Nothing's happening," Dew said. "I got a little money from FEMA. We got a lot of talk and that's it."

Around 90 Princeville families are still living in trailers near the historic town.

"It does take time," said Princeville Mayor Pro Temp Linda Joyner, who added that before residents can get the funds needed to rebuild, an environmental assessment needs to be completed.

"We're not lagging," Joyner said. "We're not being slowful. We are being careful. We want sustainability in Princeville."

To date, 81,979 people registered with FEMA for Disaster Assistance, according to Governor Roy Cooper's office.

"There's a lot that has been done to help get people get back on their feet but there's a lot of work to do and we know that trying to get money to local governments to help rebuild infrastructure, to help rebuild low-income housing, to mitigate damages, to elevate homes, there's still work to do," Governor Cooper said.

Hurricane Floyd devastated the flood-prone area in Edgecombe County 18 years ago and like many residents, Dew is starting over for a second time.

This time, he said, it's been more difficult. Dew has been in and out of the hospital with heart problems, since Matthew.

Dew said he's been seeing a psychologist to help him as he starts over again. He is slowly healing.

There are also signs of renewal throughout Princeville.

Bridgers Food Store is back open. Town officials show us the senior center being renovated and raised 10 and a half feet above the ground in case of future flooding.

Princeville, which touts itself as the first town settled by freed slaves, is annexing more than 50 acres of land on higher ground. Town officials pledge to preserve the history and rebuild stronger than ever.

"We believe that if our ancestors left that legacy with us, showing us that you can rebuild with literally nothing, with technology now, with engineering powers now, certainly we should be able to rebuild Princeville and be able to live a sustainable life here and live a peaceful life here," Joyner said.

The Princeville Volunteer Fire Department set up a temporary station in town.

"They see that the fire department is back," said Fire Chief James Powell. "We have assets here in our community and so we're not in other communities. We're here so it makes them feel pretty good that there is some activity going on and they don't feel that they have been forsaken. Just to see us here and operating in Princeville gives them hope, and it gives them something tangible they can see."

Dew is also hopeful he'll get back some of what Matthew took away from him.

"It might take me longer this time but I'll get it. I'll get there," Dew said. "At least I'm on my property. I'm home."
Report a correction or typo
Related topics:
nchurricane matthewnorth carolina news
Copyright © 2021 WTVD-TV. All Rights Reserved.
More Videos
From CNN Newsource affiliates
TOP STORIES