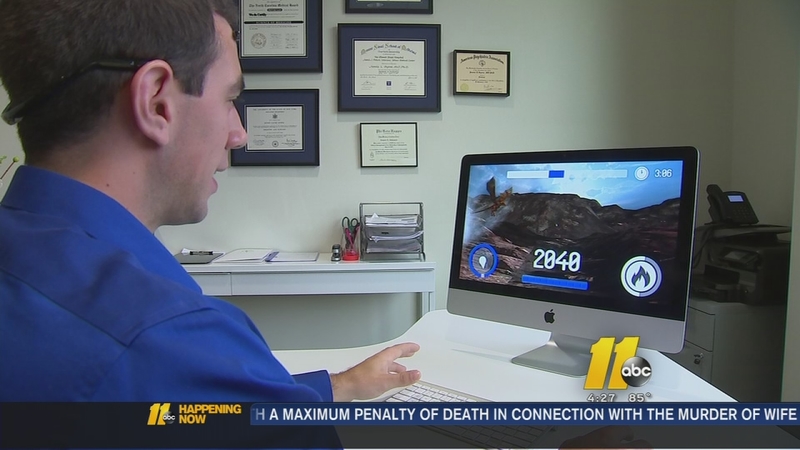 DURHAM (WTVD) -- When it comes to treating ADHD, Attention Deficit Hyperactivity Disorder, the standard care of therapy has traditionally centered around medication. And while this can be extremely effective, now there's a new tool on the market that takes more of a "training approach."

"Neuro+ is an attention training system for kids and adults with ADHD and other attention issues. It's basically a brain-controlled video game that helps kids and adults learn and develop attention skills and the ability to pay attention," explained Neuro+ creator Jake Stauch.

Although only 23, Stauch has actually been working on this project for a while, starting when he was a 19-year-old student at Duke.

"I was a researcher at the Duke Center for Cognitive Neuroscience working in the lab that studied attention with EEG, so electrodes on the surface of the scalp. And I learned a lot about the processes involved in attention there, then I actually left Duke to create a company ... that measured people's subconscious responses to advertisements, (specifically) TV commercials," he recalled.

While at the lab, he was using technology that basically hooked people up to electrodes to monitor how much they were paying attention to material they were watching. But this gave him the idea, why not use this principal to train people to improve their attention skills?

"We thought, 'Well, what can we do for kids with attention problems? Is there a way we can develop something that can maybe help them?' So, it started as a side project to see if kids could wear a headset and levitate a little glider on the screen and make it go up or down with their attention levels," said Stauch.

And from there, the idea has evolved. It operates using a special headset.

"The child sits and they wear an EEG headset. So, it's a really easy-to-use system that kind of sits on their head," Stauch explained. "And that's actually going to record the electrical activity coming off the surface of their scalp. So, when your brain, it has 10 billion neurons, when they fire in synchronized patterns, they actually generate a signal we can pick up at the scalp. So, they're wearing a headset that does that, and it's also recording movement using accelerometers. So, they're going to sit in front of a computer screen and play a video game that's going to require them to focus and sit still ... they have to pay attention to the screen and we know when they're paying attention to the screen because of the EEG systems, and we know when they're sitting still because of the accelerometers ... (and) that requires them to focus and requires them to sit still, and teaches them over time to develop those skills."

To explain what he was talking about, Stauch demonstrated one of his games for us. This particular one involved a dragon that has to fly through a course shooting down enemy dragons while bypassing "friendly" creatures. Some of the game is controlled by keyboard or mouse clicks. But to actually make the dragon move, the user has to focus directly on that task.


"I am focusing to make this dragon go faster," Stauch said as he stared intently at the screen demonstrating for us. "At the same time, I'm trying to get my body as still as possible, because if I move ... the screen shakes, it turns red, and I lose points ... The more I focus, the faster it goes, and I'll get to the destination in time before time runs out. If I lose focus, my character will actually stop."

And working on maintaining focus and sitting still are issues that are often problematic for patients with ADHD, which applies to both children and adults.

"It's still kind of an evolving science in terms of what we know about it," explained Jennie Byrne, M.D., PhD, with Cognitive Psychiatry of Chapel Hill. "It used to be thought it was just little boys who were bouncing off the walls. Now we know it's almost equal boys and girls. It also used to be we thought it goes away after childhood, but new evidence is showing at least half, probably more like 75% of adults, have symptoms in adulthood, they just look different."

But regardless of how the symptoms present themselves, both she and Stauch believe Neuro+ can help to essentially re-train the brain in these patients.

"Think of it as a tutoring kind of system," said Stauch. "We have tools in place to help children and adults that have difficulties with reading or math or speech skills, but we don't have a lot of tools in place for children or adults that have trouble paying attention. We mostly try to encourage them to try to pay attention, but we don't have the systems in place to get them to practice those skills. So, this is a system so they can practice paying attention, practice controlling their body and sitting still."

As for results, Stauch and Dr. Byrne partnered up for a small pilot study using some of her adult ADHD patients.

"We ran the Neuro+ system and we basically just got their reactions to it. We measured their attention scores, how they felt it was working, whether or not they reduced their medications. And it was a really small group, so it was not something that was publishable. But, we found that patients felt like it really made a big difference for them. Or, interestingly enough, sometimes they didn't report a major difference but their test scores showed that it did make a difference," Byrne reported.

Dr. Byrne was so impressed with the results that she's signed on to offer this as therapy to her patients at her practice. She says her recommendation is to play the game for 20-40 minutes around 3 times a week for a couple months. As for Stauch's company, he said they've now made the product available for consumers to buy. And, he's in talks with other companies, including Rovio, the Creator of Angry Birds, who have already signed on to create another version of his game featuring the Angry Bird characters.