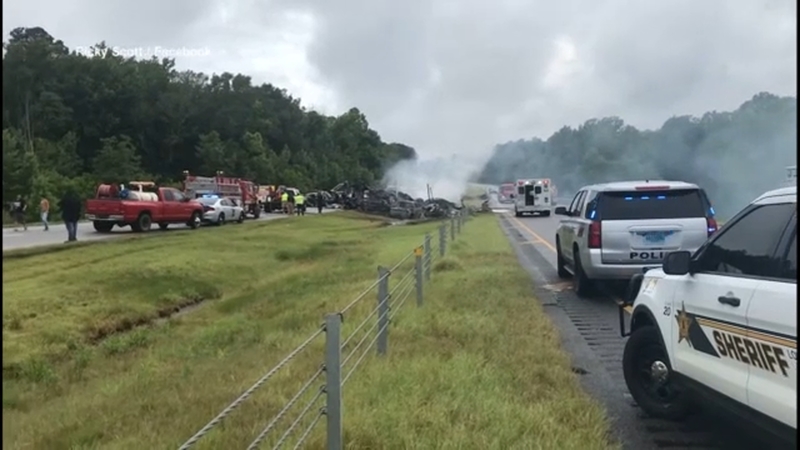 Nine children and one adult were killed in an accident involving multiple vehicles on Interstate 65 in Butler County, Alabama, on Saturday, according to Butler County Coroner Wayne Garlock.

Eight of the children killed, ranging in age from 4 to 17, were in a vehicle from the Tallapoosa County Girls Ranch, Garlock said. The youth ranch provides a home for neglected or abused school-age children, according to the Alabama Sheriffs Youth Ranches, the nonprofit that manages the Tallapoosa County girls ranch and others across the state.

A 29-year-old father and his 9-month-old daughter who were in another vehicle were also killed, Garlock said.

The accident happened on I-65 northbound at mile marker 138 on Saturday afternoon during storms that swept through the state, according to Garlock. A tropical depression that had been known as Tropical Storm Claudette dumped heavy rain across the Southeast on Saturday after it came ashore in southeastern Louisiana early that morning.

A CNN producer witnessed the accident while driving home to Atlanta from a family beach trip in Destin, Florida, with her husband and their 6-month-old daughter, CNN reported.

Lacey Willis said the weather had been bad about an hour prior to the crash. At the moment of the wreck "it wasn't downpouring," she said, but there was still a lot of water on the road.

Willis had just climbed into the backseat of the car with her daughter when she felt an impact, she said. Their car had hit a guard rail, setting off the airbags and sending them into the grass on the median.

Immediately, she said her husband told her they needed to get their daughter out of the vehicle. Willis said she grabbed her daughter and was walking as far away from the site of the accident as she could when she noticed vehicles had started to catch fire.

"I'm barefoot, standing on I-65, walking, walking far enough away," she said. "I was just praying."

Willis' husband helped pull one family -- a man, a woman and their two kids -- from a truck that had flipped on its side, she said.

People were calling out for someone to call 911, Willis said, but no one knew what mile marker they were at. "There was a man without a shirt on," she said. "He was yelling -- looking for nurses, doctors."

Willis said she and her family were at the scene of the crash for five hours. Some people were stuck on the side of the road because their cars were on fire, she said.

Willis said she was "very grateful" that her family was able to "escape" but acknowledged "there's a little guilt aspect."

"Those families' lives are changed forever, and I hope that somehow people will find a way to be OK," she said. "Because this was tragic for a lot of people. We are very, very fortunate."

The driver of the small Girls Ranch bus was pulled from the burning vehicle, Garlock said, but rescue personnel were unable to reach the girls in time.

In the other vehicle, the father was pronounced dead at the scene Garlock said. The infant was taken to Regional Medical Center, where she was later pronounced dead. Garlock noted that she was properly restrained in a car seat, but said the impact was too powerful.

The Alabama Law Enforcement Agency has asked members of the public who may have photos or videos of the accident to submit them to law enforcement.

The National Transportation Safety Board announced Sunday afternoon it was sending a team of 10 investigators to the scene of the accident, describing it as a "multi-vehicle crash." The team is expected to arrive Sunday evening.

The "NTSB investigation will focus on vehicle technologies such as forward collision warning systems, CMV fuel tank integrity, motor carrier operations and occupant survivability," the agency said in a statement. NTSB investigators will be working in coordination with the Alabama Highway Patrol.

The lone survivor from the Girls Ranch vehicle was the Tallapoosa County Girls Ranch director, who was driving the vehicle at the time of the accident, according to Michael Smith, the CEO of the Alabama Sheriffs Youth Ranches.

The director lost two of her own children in the crash, Smith said, and she is currently hospitalized in serious but stable condition. She was likely saved by bystanders who pulled her from the vehicle while she was unconscious and trapped inside, Smith said.

"Her life was saved, and we're so blessed with that," Smith said. "Unfortunately we lost the other eight passengers."

Smith visited the crash site Saturday and said it was unlike anything he'd ever seen. The damage was so extensive that he couldn't recognize his own ranch van.

The director has been with the organization for nine years, Smith said. She became the director of ranch life at the Tallapoosa County Girls Ranch 17 months ago.

"I just visited her today in the hospital, and she's talking, and I was with her this morning and I went to tell her 'bye' and that I was coming here to the ranch," Smith told CNN. "And she said, 'Please tell my girls I love them.'"

People gathered at Reeltown High School in the east central Alabama town of Notasulga on Sunday afternoon to offer support and counseling to the families of some of those killed in the accident.

Principal Clifton Maddox told CNN people had gathered to "show families and students that they are not hurting alone." Four students from his high school were killed in the accident, Maddox said.

The mood in the high school gym -- now a makeshift counseling center -- was heavy, with several people crying and many looking shell-shocked from the news.