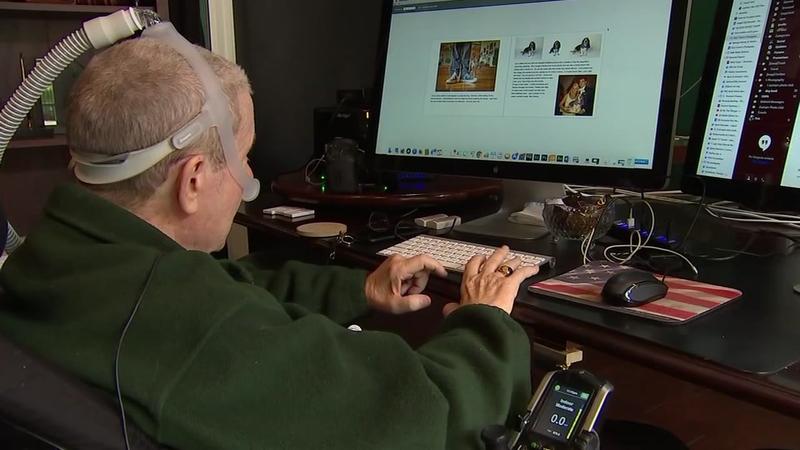 Rick Fisher has been capturing life through a lens since he worked on his high school yearbook. Now, with less than a year to live, he's creating a final love letter of sorts that will help others.

Fisher spends a lot of time in his wheelchair and wearing an oxygen mask. His lungs are only functioning at 50 percent.

"I always thought I was going to live to be like my dad," Fisher said. "He was 88. So, when you're 69 and someone tells you-you're not going to make it to your 70th birthday...that's pretty tough."

Fisher was told in March he only has 10 months to live. He has ALS, an unkind disease that robs the body of its strength and abilities.

But to Fisher, this is not a story of sadness, but of dedication and love.

"I celebrate every day," Fisher said. "When I get up, I say to Beth Fisher's wife 'It's going to be a good day!' and she says Why? I say, Well, first, I'm breathing. The second is I'm going to work in the studio all day!'"

Fisher can no longer operate a camera, but he can operate his computer. He clicks and creates. He sorts through some 50,000 photos, narrowing down each one.

Through the years, he has immortalized man's best friend, including former ABC11 anchor Larry Stogner.

Fisher loves animals, and dogs in particular. He has two labs.

Emmett is the oldest, who will soon have a biopsy. "I hope I go before Emmett," Fisher said clearly worried for his best pal.

In his studio, he's creating a final love letter- a book of dogs.


A book not of his creations alone, but from photographers from around the world. Fisher has even included special photos from Facebook friends, with their permission of course.

The book will not bring a single dime into Fisher's house. Instead, any money raised will be given to animal shelters.

This is as an effort to raise funds for shelters across the country, Fisher hopes.

"Well, it is crazy, but I think I can do it!" Fisher said after mentioning his goal is to sell 1,000 books.

If he meets that goal, he will have successfully raised $50,000 for local animal shelters, primarily the Animal Protection Society of Durham.

With every breath, Rick pushes forward; Fighting for himself and for those who can not speak.