'We refuse to be silent': Rabbi calls out antisemitic graffiti on Raleigh bridge 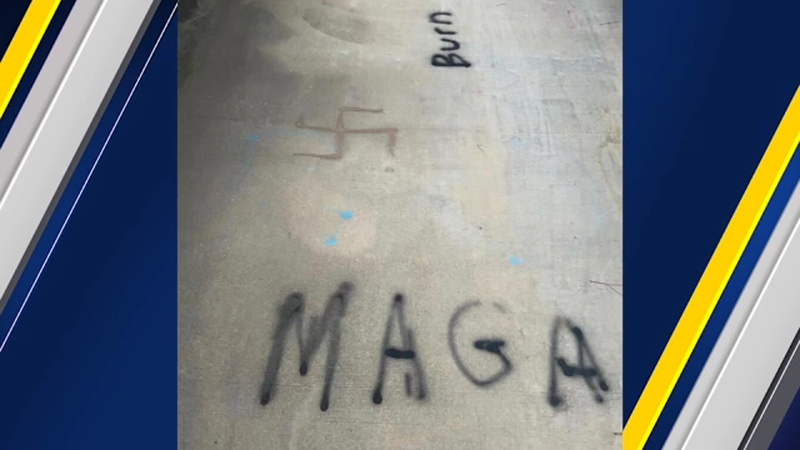 RALEIGH, N.C. (WTVD) -- While on a morning jog, a Raleigh rabbi saw images that he said shook him to his core: two swastikas painted on the Interstate 540 pedestrian overpass.

"It was shocking," said Rabbi Eric Solomon of Beth Meyer Synagogue. "You know, antisemitic events or things of this nature are extraordinarily rare, and to see it on a bridge right in our area was, I was shocked. I was stopped in my tracks."

The images hit close to home for him.

"I have family members that survived or perished in the Holocaust as well, so it's incredibly close to home," Solomon said.

He said the image of the swastika, the symbol of the Nazi party, doesn't just symbolize hate against Jews, but all people, including the Americans who fought against the Nazis in World War II.

While some people told Solomon that the images may have been painted by teenagers or people who didn't know the meaning behind the symbol, he said that's also disturbing.

"It's a symbol of hate, and it makes me believe that either someone doesn't understand what that symbol means and the depth, which is deeply troubling, or they do know what it means and they're trying to send some kind of threatening message to really anyone on any level, but certainly to the Jewish community," Solomon said. "It's a statement that you don't belong here; that you are somehow maybe, Gd* forbid, under threat."

Solomon said he immediately reported the graffiti and was in contact with Raleigh officials to get the situation remedied, and it was removed in a few days. He said one of the most important lessons of being Jewish is to speak up against hate and never stay silent.

"We know in our history, sadly, that what begins with symbols and some loose talk or a few inappropriate things said leads somewhere else," Solomon said. "It says in the Book of Proverbs, you know, life and death is in the power of the tongue, and we know that it can lead to sadly actual harm. That is how many antisemtic incidents begin, is with a symbol and then end with violence, sadly."

Thursday marks International Holocaust Remberance Day, the day the Auschwitz-Birkenau extermination camp was liberated. A refrain in the Jewish community when referring to the Holocaust and the 6 million Jews who perished at the hands of the Nazis is "Never Again."

"Never again will we let anyone speak up in a violent or negative or hateful way against any group," Solomon said. "A swastika is a symbol of hatred against all people, all reasonable, moral people. So I immediately spoke up first so that we are aware of it, people need to be educated on this sign of hatred, and then so it doesn't lead anywhere else."

Solomon added that silence is sometimes seen as complicitness or agreement. "We refuse to be silent."