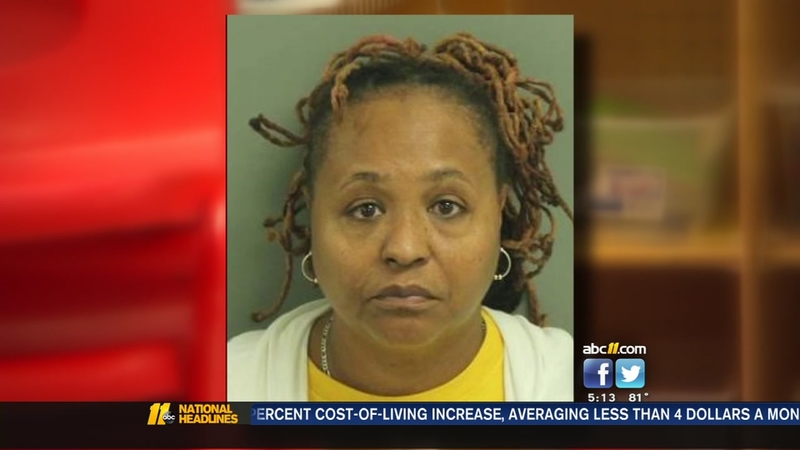 RALEIGH (WTVD) -- Police charged a Raleigh daycare worker with child abuse after she allegedly shoved an 18-month-old boy into a bookcase.

Tracey Stallings, 46, is charged with misdemeanor child abuse. She bonded out of jail Tuesday morning.

Kasandra Sharpe told ABC11 that Stallings also threw her son onto a cot and hit him on the head with a plastic container during classroom circle time on Wednesday.

The daycare's director discovered the incident later that afternoon after reviewing surveillance video with another parent.

"When a director sees anything like that it's a very difficult position that you're put in, and it's a very stressful one. You don't want that in your center," said owner Carolyn Joyner Driggers.

The director self-reported the incident the next day to the Division of Child Development and Early Education.

Stallings was allowed to return to the classroom Thursday morning but was later fired.

"She was with the room with someone else while the director was self-reporting it, getting all the ducks in the row because you have to have paperwork for the file," said Driggers.

Another teacher was in the classroom with Stallings when the incident occurred, but Driggers said her back was turned and she did not see or hear anything.

That teacher is still employed with Appletree.

Sharpe said she was not notified of the incident until Thursday evening.

The toddler was checked out by doctors and is okay.

Appletree has a 5-star rating according to DCDEE.

Driggers said all employees are required to undergo extensive training and must have a letter of qualification from the state.

Stallings had more than a decade of experience working with children when she was hired a year ago and did not have any previous charges of abuse.

"We had never received any complaints. The parents, from what I understand, loved her," said Driggers.

Parents received a letter Monday notifying them of the incident.

The day care plans to hold an emergency staff meeting on Thursday to review its abuse and neglect policy.

"This is not what we promote here at Appletree and I'm just very sorry for her. I wouldn't want that to happen to anybody," said Driggers.