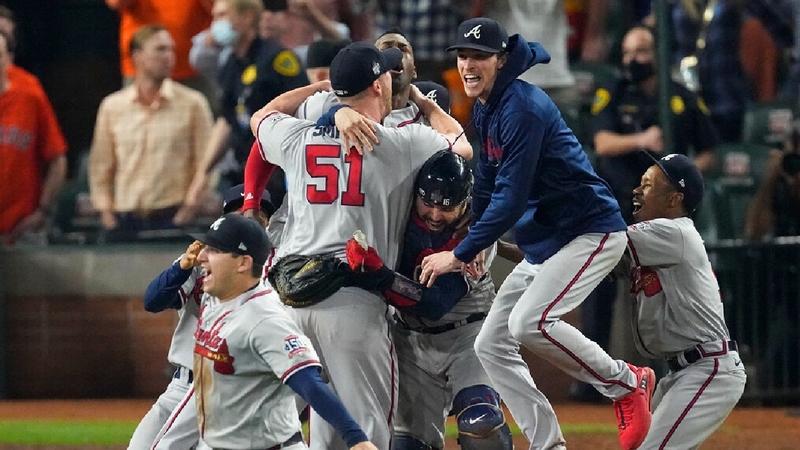 ATLANTA -- After Dansby Swanson fielded the final out of the 2021 World Series, a chopper from Yuli Gurriel, he briefly glared at Atlanta Braves teammate Ozzie Albies. Seconds earlier, Albies had assured Swanson he would be standing on second base to record Tuesday's 27th out. When he wasn't, Swanson had to pivot to complete the most important throw of his life -- and maybe that was fitting.

Swanson grew up 20 miles from Atlanta and was raised to love the local baseball team. Before he graduated high school, Freddie Freeman ascended to the major leagues and began to establish himself as one of the sport's greatest first basemen. They became teammates, helped lead the Braves into another resurgence and grew close through the process. On this night, in Game 6 of the World Series, they connected on the final out that cemented a 7-0 victory over the Houston Astros and capped the Braves improbable ascendance.

They were ravaged by injuries early, dismissed as late as August and counted out at practically every juncture of these playoffs, but the 2021 Braves -- with a brand-new outfield at midseason and a depleted starting rotation by the end -- are World Series champions for the first time since 1995. They rode a dominant Max Fried, rolled after Jorge Soler's prodigious home run and ended it on Swanson's throw to Freeman, who dropped to a knee, raised both hands in the air and then mobbed his teammates near the pitcher's mound at Houston's Minute Maid Park.

"We hit every pothole, every bump you could possibly hit this year, and somehow the car still made it onto the other side," Freeman said. "It's just an incredible group."

Fried, coming off a rough outing six days earlier, mowed down the Astros' high-powered offense through six scoreless innings, retiring 16 of 19 hitters after a scary ankle injury. But it was Soler who put a jolt into an offense that ultimately cranked out four timely extra-base hits, three of which went over the fence. Soler's cleared the left-field train tracks, sailing 446 feet to give the Braves a three-run lead in the third inning. He released his bat upon contact, turned to his dugout, patted his chest repeatedly, pointed to the ground and yelled, "I'm here!"

Soler's blast -- on a two-out, full-count cutter by Luis Garcia, who was making a rare start on short rest for an Astros rotation that was equally short-handed -- accounted for his third home run and sixth hit of the series, and cemented him as the clear choice for MVP.

The Braves came into this World Series with 16 consecutive postseason appearances without a title, accounting for the longest streak of all time -- and now it's finally over.

Brian Snitker, who has spent the past 45 years in the Braves' organization but didn't become their major league manager until Year 40, received the World Series trophy from MLB commissioner Rob Manfred and couldn't find the words.

Freeman, the cornerstone of this franchise for the past decade, had shoved the baseball from the final out in his back pocket and planned to deliver it to Snitker.

He couldn't find the words, either.

"I'm kind of trying to tell you guys things of how I feel because I don't really feel anything yet," Freeman said from the dais. "It's going to hit hard soon. I don't know when. Maybe it's when we get to see everybody in Atlanta."

Freeman provided the finishing touches in the seventh inning, lining a two-out slider over the center-field fence for the solo homer that increased the Braves' lead to seven. The Astros' fans, who rallied around their team while most of the country vilified them this season, had fallen silent by then.

The Astros have reached the World Series three times in a span of five years, a dominant run that put them among the greatest teams in the sport. But they have come away with only one title, in 2017, a year tainted by the trash-can-banging scheme that triggered severe punishment. In 2019, they blew a 3-2 lead to a Washington Nationals team that didn't catch fire until the very end. In 2021, they were defeated by a Braves team that followed a similar trajectory.

Marcell Ozuna, signed to a $65 million extension to bolster the Braves' offense, was arrested in late May on domestic violence charges and never returned. Mike Soroka, one of their promising starting pitchers, re-tore his Achilles tendon in late June and never contributed. And Ronald Acuna Jr., their superstar center fielder, tore his ACL on July 10, spoiling what was looking like an MVP season.

By the end of July, the Braves sat five games out of first place and two games below .500. But their run differential was promising, and their revenues were higher than projected, so their general manager, Alex Anthopoulos, engineered trades to acquire four outfielders that drastically altered the course of their season.

"I can't say enough about Alex," Snitker said of Anthopoulos, who couldn't celebrate with the team because he had tested positive for COVID-19 three days earlier. "I always say the only thing he's guilty of is he never stops trying to make this thing better. He's just a tireless worker, he and his staff, trying to make this club better all the time. He's never going to cash the chips in ever. If there's ever slightly a chance or a glimmer of hope, he's going to go out and go for it."

Bolstered by Anthopoulos' moves, the Braves won 36 of their last 55 regular-season games and ran away from the rest of the National League East. They dispatched the Milwaukee Brewers in four NL Division Series games, then dethroned the mighty Los Angeles Dodgers -- a team that led the sport in run differential and won 18 more games -- to become the first team in MLB history to reach the final round despite not boasting a winning record until Aug. 6.

They were powered by Adam Duvall, Joc Pederson, Eddie Rosario and Soler, their four new additions. By Austin Riley, who became a star in his age-24 season. By an excellent trio of starting pitchers (Fried, Charlie Morton and Ian Anderson) and a dynamic bullpen foursome (A.J. Minter, Tyler Matzek, Luke Jackson and Will Smith). And, most of all, by their lynchpin, Freeman, a pending free agent who continued to be a steady presence.

The World Series was won on contributions from practically everyone.

Morton suffered a broken leg in the third inning of Game 1, but the Braves' offense got after Framber Valdez and never let the Astros get close. Anderson began Game 3 with five hitless innings, and the Braves' four high-leverage relievers allowed only two the rest of the night. In Game 4, Swanson and Soler provided a lead with back-to-back home runs in the seventh, and Rosario preserved it with his glove in the eighth. In Game 6, the Braves' best pitcher dominated around an offense that suddenly became suffocating.

Fried scattered only four singles through six innings and set the tone at the onset, after Michael Brantley stepped on his right ankle on an eventual infield single. There were two on with none out in the bottom of the first, but Fried retired the next three batters in order, two on strikeouts, and cruised from there.

The Astros' offense led the majors while averaging 5.3 runs per game during the regular season and increased that to 6.7 through the first two rounds of the playoffs, but the Braves' staff limited Houston to two runs or fewer in four of six games.

"It was their pitching," said Astros shortstop Carlos Correa, who will now venture into the free-agent market. "They were really good. Fried tonight was lights out. They shut us down."

Freeman came up at the tail end of Chipper Jones' Hall of Fame career, when the Braves made three trips to the postseason in four years from 2010 to 2013. He signed an eight-year extension the following February, then rode out a four-year stretch burdened by an average of 90 losses. But then the Braves' farm system started to matriculate impact talent, and eventually they got good again, winning four consecutive division titles. Freeman helped carry them through the highs and the lows. Now, in what could be his final season in Atlanta, he's a champion.

"He means everything to this team," Swanson said. "He's been through the worst of times, and now through the best of times. Nobody deserves it on our team more than him. He stuck it out and really believed in the vision and mission that this place had. I'm just thankful for him to be on our team."
Report a correction or typo
Related topics:
sportsgeorgiaworld seriesatlanta braveshouston astros
Copyright © 2021 ESPN Internet Ventures. All rights reserved.
TOP STORIES
NC Supreme Court ruling moves state's primary from March to May
Donate to the ABC11 Together Food Drive
Raleigh City Council approves the use of tiny homes
Crime, affordable housing top priorities for Durham's new mayor
Chapel Hill stretches of I-40 to honor Dean Smith, Roy Williams
Push to boost as NC first Omicron case could be 'week or so' away
Show More
Officials promise more subsidies, urge signups on Healthcare.gov
21-year-old becomes youngest person in NC to serve in public office
Map used by Rep. Madison Cawthorn is a possible ethics violation
Supersonic jet maker may be coming to North Carolina
Cumberland County Schools welcoming feedback from military families
More TOP STORIES News