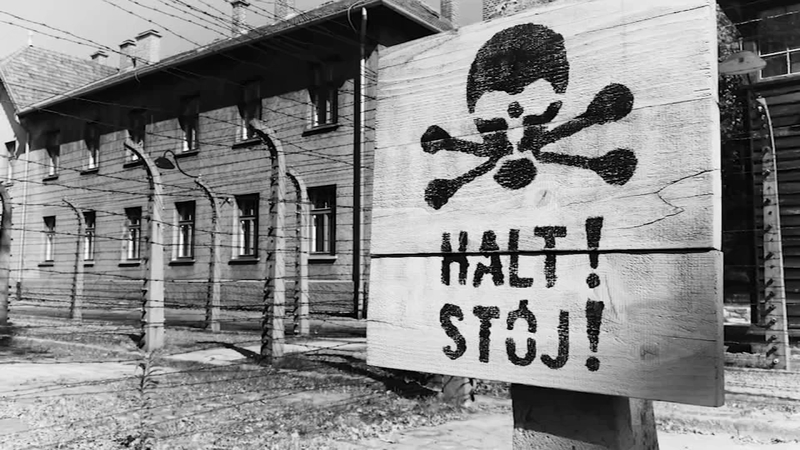 RALEIGH, N.C. (WTVD) -- It's not just that they survived Auschwitz; their living and thriving for many more years were their enduring victories.

Defeating Hitler, however, is not the same as beating time.

"We heard a lot of stories, but never in chronological order and I never really asked a lot of questions," Craig Becher, whose paternal grandparents survived the Holocaust, said. "I listened and absorbed them. For me, it matters because I want my kids to hold on to a piece of what I have so that it doesn't get so diluted."

As the world marks International Holocaust Remembrance Day, the children and grandchildren of survivors are now being called upon to bear witness to the atrocities.

There's no official count of living Holocaust survivors in America or abroad, but the U.S. Department of Veteran Affairs estimates at least 294 veterans of World War II die every day, and most--if not all--who remain are in their 90s.

"Auschwitz, the word, carries a lot of strength with it," Becher said. "I think that Auschwitz is kind of used as the stepping stone or association people have with the Holocaust."

Becher's grandmother, Martha, was captured by the Nazis and deported to Auschwitz as a teenager.

"She kind of checked the boxes of the things people think about: having to go on the cattle car rides, having to jump off the cars and being separated, and there's men with dogs, the selection process, having seen people run to electrified fences."

Asked about the tattoo on her arm, Becher doesn't flinch: 37375.

"It's always there, a part of who she is, and that's kind of the way I feel about it too."

Martha (Kadden) Becher died in 2018 at age 95; her husband, Claus, another German survivor, died in 2008. Their stories have been recorded, but Craig knows it's now up to him to ensure their stories are never forgotten.

"To basically prevent something like this from happening," he said. "If you don't know about it, you can't identify it if it is happening. If you have a lack of understanding or lack of education, if this is starting right now or in 10 or 20 years, you won't recognize it for you or your friends or someone to say this is happening again."

The North Carolina Council on the Holocaust, an agency of the N.C. Department of Public Instruction, has itself compiled a long list of survivor narratives, among other resources, for teaching about the subject.

For decades, many survivors living in North Carolina visited middle and high schools, but the number of survivors still living and able to tell their stories are dwindling: Zev Harel, Hank Brodt, and cousins Rachel Kizhnerman and Shelly Weiner, among others.

Abe Piasek, among the most prominent and popular speakers in the Triangle, died January 15 at the age of 91. ABC11, in fact, spoke with Piasek in 2018 to mark 80 years since Kristallnacht, the night many historians consider the start of the Holocaust.

As many as six million Jews perished in the Holocaust--including 1.5 million children--but several million more were casualties of the war in Europe.

Of the more than 16 million Americans who served in World War II, the National World War II Museum reports less than 390,000 were alive in 2019, including 9,528 in North Carolina. The Museum further estimates that the entire generation of World War II veterans will be gone within the next 10-15 years.

"I was fighting for my country and against what was going on in Europe," Levin said. "I don't know how anyone could have not, whether they were Jewish or Protestant, wouldn't want to get in the fight."

Levin, a graduate of N.C. State University, was drafted and sent to Italy in 1943. He would soon be captured by the Nazis and sent to a Prisoner of War (POW) camp.

"I turn around and I'm looking down the barrel of a gun," Levin said. "What am I going to do? I put my hands up and got out of the foxhole."

Levin, cognizant of his name and his religion, recalled taking the advice of a British POW to lie about his heritage when checked into the camp.

"I told them I was a Christian Scientist, and I'm not sure they knew much about that at the time."

Today, Levin is a new great-grandfather and is looking to his children to protect his legacy.

"We're the last ones to have to go through this. We don't want anyone else to have to go through this. We wouldn't want another generation of people, regardless, black white Jew or Protestant, have to go through being tortured killed or put into concentration camps. I hope most civilized people would think that something like this shouldn't happen. It could happen, but I certainly wouldn't want it to happen. And if my story would help, I would certainly appreciate it."
Report a correction or typo
Related topics:
societywake countyncveteransholocaustworld war ii
Copyright © 2022 WTVD-TV. All Rights Reserved.
TOP STORIES
Supreme Court to hear challenge to race in college admissions
Alex Murdaugh hit with more charges connected to 4 new clients
LATEST: Testing centers opening on delay Monday
Family demands justice after 23-year-old woman found dead after date
5 tax changes that can boost your refund this year
NC A&T wins Sports Band of the Year from HBCU Sports poll
Triangle Restaurant Week returns to highlight local small businesses
Show More
Woman finds $3M lottery prize in her spam folder
Child care program available in Wake County for $30
School closings and delays
Fauci optimistic omicron will peak in February
Many seek N95 masks amid high COVID cases
More TOP STORIES News