Baseball safety at top of mind for fans and area teams 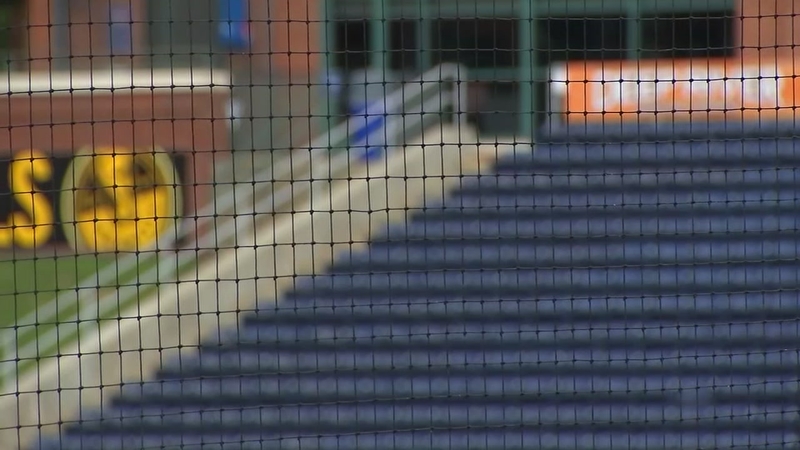 DURHAM, N.C. (WTVD) -- The Bulls, Mudcats and Woodpeckers are all in action this weekend.

The games come amid raised concerns about safety at stadiums across the country.

Major League Baseball had its first foul ball death in 2018; this year in Houston, a Chicago Cubs player lined a ball into the stands that severely injured a young girl.

In response, several ballparks have extended their protecting netting. The Durham Bulls extended theirs to the ends of both dugouts before the 2016 season.

Now there's a new move to extend the netting from foul pole to foul pole -- something the Chicago White Sox have already done at the big-league level.

"If it saves one life, one trip to the emergency room or if it saves one fan from having to go to EMS at the ballpark, then it was worth it," said Matt Sutor, director of marketing and communications for the Bulls.

The Bulls don't have any firm plans to add netting, though they're looking into various options.

Each minor league club decides where, when and how they'll add netting at ballparks -- as it is done in MLB.

"I think it's paramount for baseball to continue to do so to keep the game safe for fans," said Scott Pose, color analyst for the Bulls.

Pose also played in the majors.

"I used to tell my wife when she brought our young kids that she couldn't go to a game without sitting behind the netting," Pose said. "I wanted her to sit behind the netting because I had seen too many things happen."

Elizabeth O'Quinn came out to the Bulls game Friday to celebrate her 3-year-old's birthday. She also brought along her 2-month-old.

"I think the biggest thing is making sure we're paying attention to the game and that's on us," she said. "We haven't come yet just me and my husband. We always come with others so people can keep an eye on what's happening."

She said she believes there can be a compromise about extending the netting.

"I think it takes away a little from the experience -- maybe not all the way to the foul pole," O'Quinn said. "For people who are not having to deal with kids, I think maybe they want to have a direct line to the game."

The Mudcats said they were one of the first teams to upgrade their stadium in Zebulon to more modern safety standards back in 1998.

Their netting goes up 45 feet at its highest point behind home plate and that height extends to over the dugout.