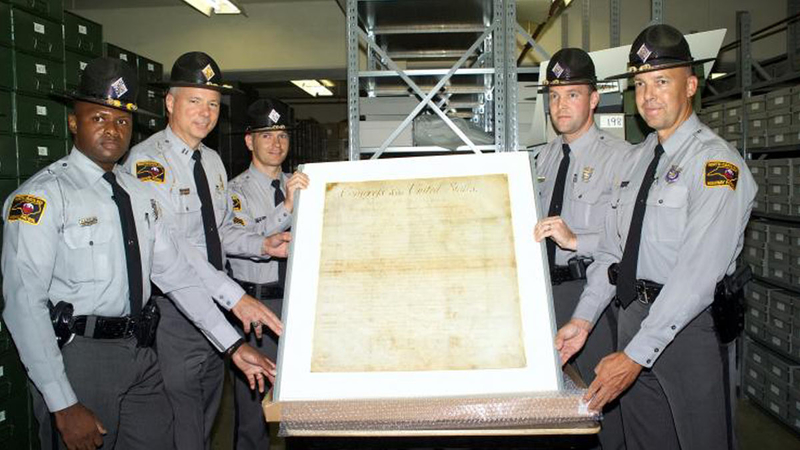 RALEIGH (WTVD) -- After being lost for 138 years, an FBI sting recovered North Carolina's original copy of the Bill of Rights--a document that North Carolinians demanded be included in the U.S. Constitution.

In the late 1700s, many North Carolinians were distrustful of a strong central government. In the name of protecting individual freedoms, the state had already added a Declaration of Rights to its Constitution; many of those rights (freedom of religion, right to a fair trial, etc.) would later become part of the U.S. Bill of Rights.

Without explicit guarantees of individual freedom and protections for individuals against the federal government, North Carolina leaders met in Hillsborough from July 21 to August 4 in 1788 and a majority of them voted against joining the United States.

However, the Hillsborough Convention did not stop there. The group said it would join the United States if and when a list of rights protecting individual liberties and freedoms was added to the Constitution. The group even made a list of the rights it wanted added and sent them to the other states.

In just over a year, the Bill of Rights was added to the U.S. Constitution and North Carolina quickly ratified it.

President George Washington, who was elected in 1788 without any votes from North Carolina, commissioned 14 copies of the Bill of Rights. He sent one document to each state and kept one for the federal government.

North Carolina proudly held on to its copy of the Bill of Rights until it was stolen in 1865 by a Union soldier.

That soldier sold it to a friend for $5. For more than a century the historical document exchanged hands in off-the-books dealings.

If you're interested in more details about the Bill of Rights' time on the lam, consider reading Lost Rights: The Misadventures of a Stolen American Relic by David Howard.

Then in 2003, an antiques dealer tried to sell North Carolina's copy of the Bill of Rights to a museum in Philadelphia for $5 million.

That's when the Federal Bureau of Investigation got involved. The FBI coordinated an undercover sting with an art dealer and the CEO of the Philadelphia museum.

On March 18, 2003, the FBI sting successfully secured North Carolina's original copy of the Bill of Rights.

"Our goal was to reclaim a piece of North Carolina's history. This document is a sign of our freedom, not just a collector's item," then NC Attorney General Roy Cooper said in 2003. "We now look forward to seeing our copy of the Bill of Rights returned to its rightful owners, the people of North Carolina."

"North Carolina's stolen Bill of Rights has been out-of-state for nearly 140 years but never out-of-mind," then Gov. Mike Easley said in 2003. "It is a historic document and its return is a historic occasion...I am confident that, very soon, schoolchildren and citizens across our state will soon be seeing their 'Bill of Rights' on display in North Carolina."

After years of litigation, the Bill of Rights was declared the rightful property of North Carolina.

It now resides in a vault in the State Archives. Due to its age and condition it must be carefully stored and protected. However, the state does bring it out for public viewing on special occasions.
Report a correction or typo
Related topics:
politicsraleighunited statesusahistorycivil warraleigh news
Copyright © 2022 WTVD-TV. All Rights Reserved.
TOP STORIES
Fauci optimistic omicron will peak in February
School closings and delays
Delay opening Monday at COVID-19 testing sites
Woman finds $3M lottery prize in her spam folder
Family demands justice after 23-year-old woman found dead after date
Many seek N95 masks amid high COVID cases
GoRaleigh bus crashes on Glenwood Avenue
Show More
After the omicron wave, what's next for the COVID pandemic?
One person injured in Raleigh shooting, police investigating
Wake school board holding meeting Tuesday
Tax filing season starts Monday. What to expect for 2022
Aerial views of Triangle area covered in snow
More TOP STORIES News