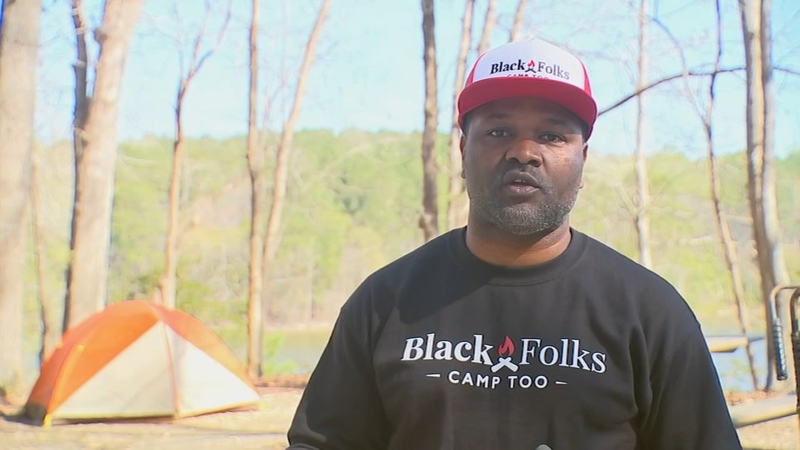 RALEIGH, N.C. (WTVD) -- The cabin fever set on by the COVID-19 pandemic has turned a lot of us to the great outdoors. State parks officials are pleased not only with the increase in visitors, but the increase in the diversity of visitors.

So now park officials are working with a group that is also trying to promote diversity.

Though a lot of people who love the outdoors view it as fun and refreshing, a lot of Black people believe the woods to represent fear, loathing and Jim Crow-era violence.

Hunter, a Black man from Brevard, spent part of his spring break camping at Falls Lake and talking about what he calls African-Americans' generational fears of being in the great outdoors saying, "My great grandmother told my grandmother, who told my mother, 'Listen, don't go in those woods.' And when you have that generational fear, that's being really driven down to you, as a young person you don't even think about wanting to go in the outdoors."

That's just one of the many reasons Hunter started Black Folks Camp Too.

After years as an executive in the outdoor industry, he decided to try to not only get the Black community outside but market gear directly to them.

The idea struck him when he took his son on a three-month combined camping and sales trip one summer.

On the journey, he sold orders for recreational vehicles in 20 states and Canada.

"Over 14,000 miles from North Carolina to British Columbia. It was absolutely amazing. And during that trip, we only saw one Black family," he recalled.

So Hunter has now, literally, made it his business to not only get more people of color into the great outdoors but to encourage businesses in the outdoor industry to profit from that untapped market.

First-time camper Donald Sweeper who came to Falls Lake with Hunter said, "I do believe there's a missing opportunity marketing to Black folks."

When Donald and his three teenage sons were invited on the trip with Black Folks Camp Too, they had their doubts, according to Donald's middle son, 15-year-old Dorian, who said, "At first I was kind of skeptical about it because when I think of camping I think of dark forests."

But the Sweeper family not only ended up enjoying the outing, but they are also making plans to buy their own gear and light up the dark forest with a campfire.

"Because I've never taken them they have, they never had the opportunity to do this. So this fear is now being removed and we're starting a new tradition," Donald Sweeper said.