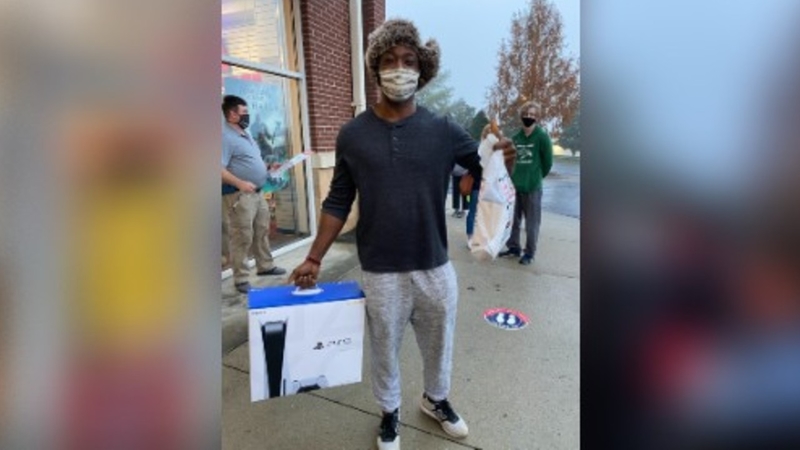 RELATED: Changes to expect in store and online on Black Friday due to the COVID-19 pandemic

9:45 a.m.
It's the biggest shopping day of the year and while there's no doubt the COVID-19 pandemic kept many shoppers at home, several shoppers camped out trying to get two of the most sought-after gifts this holiday season: the PlayStation 5 and the Xbox Series X.

Tobi started camping out at the Game Stop in Apex on Wednesday evening to try and get a chance to buy the PlayStation 5. The store didn't open until Friday at 7 am.

"I have never stood in line for anything, so this is quite important. I had to get it myself, so I had to camp out," Tobi said.

Aidan Roistacher also waited in the same line, but he wanted the Xbox Series X.

The store had two PS5's and five Xbox Series X, so Tobi and Roistacher's waits paid off.

"I feel like I can fly. I'm going to fly home now, safely, and go to sleep," Tobi said.

"Very excited, took a lot of time, a lot of effort. Now I have it in my hands, it feels great," Roistacher said.

Those who waited in lines for hours for stores to open on Black Friday said they failed to get the game consoles online, so snagging one in the store is their only option.

Raleigh resident Ken Wright said he has spent more than 200 hours trying to get one. He was third in line at the Apex Game Stop, so he left empty handed.

"We've been trying to get the PlayStation5 for a very, very long time," Wright said. "I was number three there were only two of them. We will keep trying."

The Best Buy in Cary also had a big line of shoppers well before they opened at 5 a.m. Friday. Deondre Partridge was first in line at 1 a.m.

"I want the PS5 and other electronics. We might get some good deals, so might as well give it a shot," Partridge said.

Before the doors even opened, COVID safety protocols were in place.

All customers were masked up and socially distant in line. Employees also had their temperature checked before starting on the job. Danny Nakamoto with Best Buy said several safety measures are in place throughout the store also to make sure shoppers have a safe shopping experience.

"We've got cleaning stations and all of our employees are trained on safety and cleaning up after customers," Nakamoto said.

When Best Buy opened at 5 am, it was very orderly as shoppers walked in and were counted by employees. Unfortunately, many shoppers were disappointed as Best Buy did not have any PS5's or Xbox Series X.

"It was really a big letdown today not to get one, we'll go onto the next store and keep looking," Tarek Elshenawy said.

Despite not snagging a PS5, many shoppers still left happy finding deals on big TVs and other electronics.

There was a much smaller crowd shopping early on Black Friday, but many retailers attribute that to deals being offered much earlier this holiday in-store and online.

SUCCESS!!! Tobi and Aidan got what they came for on this #BlackFriday! Tobi waited 36 hours, Aidan 18+, but they say it was worth it!! @GameStop @ABC11_WTVD #PlayStation5 #XboxSeriesX #gamestop pic.twitter.com/HVyTrL42wV

Doors open at @GameStop on this #BlackFriday! First guy, Tobi has been in line for 36 hours!!! He will be getting a #PlayStation5!! 🥳🥳🥳 @ABC11_WTVD #shopping pic.twitter.com/t9KqIgnict

6:30 a.m.
A few lucky (and dedicated shoppers) did land their prized gaming consoles in Apex.

The Game Stop at Beaver Creek Commons informed the line outside its doors that it had two Play Station 5s and five new Xboxes.

The man who was first in line showed up Wednesday in order to secure one of the PS5s for himself.

The first person in line who wanted one of the new Xboxes said he arrived at 11 a.m. on Thanksgiving.

They both said the long wait will be worth it when they get their new toy home and start gaming.

6 a.m.
A man waiting at the Game Stop at Beaver Creek Commons in Apex said he first got in line Wednesday.

"I really didn't celebrate (Thanksgiving). I kind of just ate on my own," the shopper said. "Because really the consoles (Play Station 5) were really the hardest thing to get. They were sold out within, what, seconds? So coming here was my first priority, because I knew that there would be a line eventually behind me."

He is one of many people trying to get their hands on the new Play Station and/or Xbox gaming consoles.

5 a.m.
The Best Buy located in Cary counted 131 people entering the store when it opened at 5 a.m.

The majority of the shoppers were lined up in hopes of snagging a Play Station 5 or Xbox Series X/S.

However, minutes after entering the store, some of the shoppers exited disappointed. They told ABC11 Troubleshooter Diane Wilson that the store did not have any of the gaming consoles.

The first Black Friday shopper at the Best Buy in Cary arrived at 1 a.m. Since then, dozens more people have formed a line down the outside of the building.

Everybody in the line could be seen wearing a mask, and they will all be required to keep those masks on when the shopping begins.
Retailers across the country have strict COVID-19 protocols in place to try and keep their employees and shoppers safe.