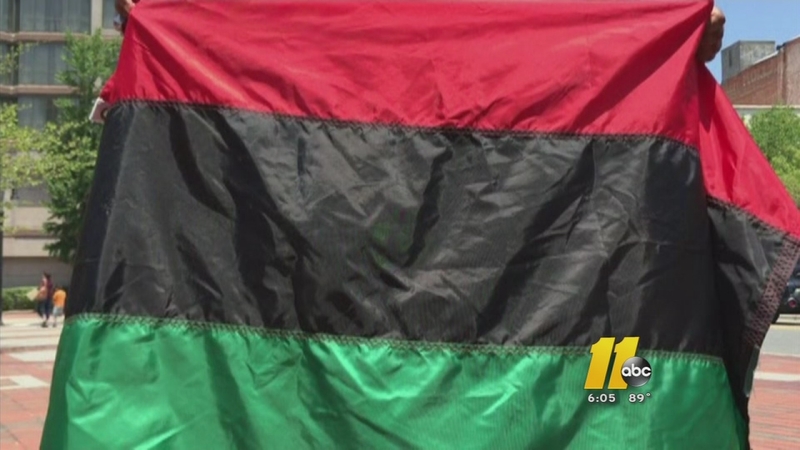 DURHAM (WTVD) -- A local minister is hoping to give Independence Day a whole new meaning.

As the debate over the Confederate flag rages on, Paul Scott, a longtime Durham activist and minister, is urging African-Americans to ditch the red, white, and blue flag for red, black, and green.

"It's a wake-up call for us to come together under this flag -- united," declared Scott, adding that he's deeply troubled by the racial climate in our country.

This weekend he wants a different historical symbol to fly high.

"While some people are talking about Confederate flags and saying take it down, we're saying let's take this flag and raise it up," said Scott while holding the red, black, and green flag first introduced by political activist Marcus Garvey in 1920. It was later adopted as the Black Liberation flag in the 1960s.

Scott is taking his cause to social media and urging followers to change their profile photos and to use the hashtag #RBGFlag this weekend. He says his message is not anti-American but rather pro-black unity.

"Every ethnic group is proud to raise their flag," said Scott. "It's time for us to have that same black pride and raise our flag."

Scott is no stranger to public causes. He launched anti-violence programs in the Bull City and publicly debated with network news anchors on race-related issues.

He said the historical Black Liberation flag should wave online and in the air this weekend, sending a message against black-on-black crime and violence of any kind.

"This flag has always been about black unity and right now to stop black-on-black crime, to stop racism and police brutality all across this country. We need black unity right now," Scott said.